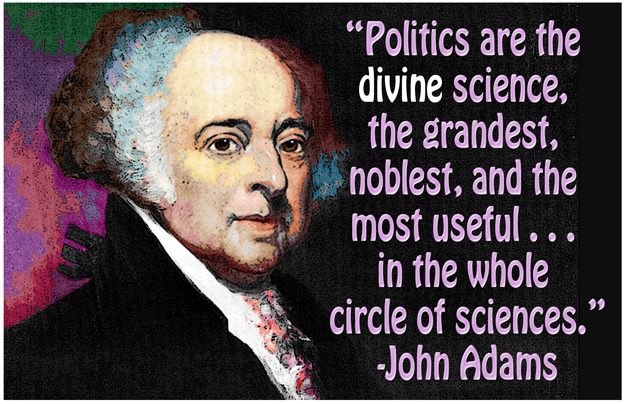 Psalm 58 is David’s passionate prayer about corrupt judges (political leaders) who devastate and destroy the righteous by unjust public laws and regulations. The first verse reads, “Do you indeed decree what is right, you gods?”  The question implies a “no” answer, just as v. 2 states, “No in your hearts you devise wrongs … your hands deal out violence on the earth.”

Here, the Hebrew Bible refers to civic leaders and judges as “gods,” just as does Psalm 82:6. What about this reference to political or civic rulers as “gods?”

In Psalm 82:6, Jesus makes clear that these judges are so called because “to them the Word of God came.” That is, they were inspired of God. The explanation here, however, “lies in the conception of such power as bestowed by God, and in some sense a delegation of His attribute …” This is to say that leaders, popularly elected by a democratic process or not, are invested with such authority as to enable them to be entrusted with God’s blessings of my liberty. To oversee that my freedom is protected and guarded in the civic sphere.

This is why Thomas Jefferson referred to the official obligations of political leaders as guarding “the sacred deposit” entrusted to them. What is the “sacred deposit?” Nothing less than the “rights and liberties of their fellow citizens.” For this same reason John Adams referred to politics as a “divine science.”

Cicero was an ancient Roman writer before Christ whom our Founding Fathers loved to quote. Remarkably, Cicero was able to see this same principle clearly enough in spite of his pagan environment. Regarding the function of civic rulers Cicero observed: “For there is really no other occupation in which human virtue approaches more closely the function of the gods than that of founding new States or preserving those already in existence.”

Old Testament scholar John Goldingay summarizes this well. “When the New Testament talks about these dynamics, it sometimes refers to powers and authorities … in a way that might suggest that there is something supernatural about them.”.

In sum, elected leaders in American society are actually invested with authority by the people that empower them to operate in positions which, in some ways, make them spokesmen of God. Hence, the Bible’s reference to them as “gods.”

Does This Reference Shield Leaders from Criticism?

Some suppose that, because the New Testament commands “honor the king” (1 Pet. 2:17), that critical review of a political leader or his or her policies, is off-limits to the Christian. Nothing could be further from the truth.

David was struck with deep sorrow regarding the leadership of Israel at the time of composing this Psalm. His prayer to God (Psalm 58) recognizes the reality that the forces of government were anything but honorable. Instead, their decisions were not founded upon any law, nor supported by any principle of justice! Because of this, his language is sharp, strong and even harsh.

Not only did these leaders not “exercise authority uprightly” (v. 1), but “with their mind” they “devise acts of wrongdoing in the country.”

Where leadership of a nation lacks sound principles of honor and personal integrity, the people suffer. “ … their rulers do not rule in a way that gives priority to integrity an concern for the people.”  Sounds familiar, doesn’t it?

“With their hearts they devise wrongs” and with their “hands” they “deal out violence” (v. 2). There is no justice in their policies. “Their poison,” or speech proceeding from their mouths, is “like the venom from a snake; like a “cobra that has stopped its ears” (v. 4). In the ancient world there were persons that charmed, lulled into inactivity, serpents, so as to prevent them from biting.

The singer of Israel then prays (v. 6-8) that God would “smash the teeth in their mouth and break the fangs of the lions.” Not a pretty picture of the wicked character of political leaders. They are like “lions,” tearing apart their prey (the people) by their unrighteous policies. In the position of “gods,” yet acting like hungry lions (see also Isa. 5:29).

It is reflecting upon these types of Psalms that our Founding Fathers insisted that, if we wish to enjoy God’s temporal blessings on the earth, leaders need to exhibit personal virtue and morality. But this is exactly what we do not have. Instead, like David’s lament, we have an American government filled with wicked people that “devise wrongs”, “deal out violence” by their policies, “speak lies,” and spew out “venom like that of a serpent,” and shreds apart the country “like lions.”

Consider two broad facts that demonstrate this. These two facts are the unjust, immoral and unconstitutional establishment of a Welfare State, while at the same time opening the Border to allow invasion of our nation.

The initial sin is the diabolical Welfare State by which the fruits of one’s labor becomes stolen property by ruling forces so they may redistribute to the poorer. In this bribery fashion followers of the Democrat Socialist Party pretend to be assisting the poor! Non-thinkers suppose Joe Biden is actually aiding people.

The second sin is the wicked policy of Open Borders which invites the entire world to be supported by the American taxpayer via this Welfare State. These two political legacies, working in tandem, will end America as we have known it.

It is ironic that powerful people in office, such as the Joe Biden’s, are compared by inspired David to deadly poisonous snakes that refuse to listen to any reasonable voice that tries to stop them from injecting their venom into the populace.

One other note needs be made here. It is the solid link between:

This is an important feature in human composition that cannot be overlooked.

An inseparable connection exists between a person’s character and his conduct. The former is the source of the latter. Some people claim that a leader’s private life does not matter, that we should be concerned only about his public performance. But what a leader is internally will always show up externally. This is the focus of Psalm 58.

The key lesson to remember about the Psalm, however, is this. David gives a scathing indictment of unjust rulers. Their hands meted out violence and injustice. Their words were as “venom” and they spoke like “snake charmers” (58:5). But David, nor any inspired spokesman, called upon men to take matters into their own hands. Instead, leave vengeance to the Lord. Recognize and call out the evil—but let the Lord settle the accounts.