1) Limited Constitutional Government. The Constitution, described by 19th century British Prime Minister William Gladstone as “the most wonderful work ever struck off, at a given time, by the brain and purpose of man” guarantees life, liberty and property. The genius of the Constitution is that it enshrines God-given rights by curtailing or limiting the power of government. As James Madison wrote in The Federalist #45, the “powers delegated by the proposed Constitution to the federal government are FEW and DEFINED.” This is the original intent of the Constitution. Today, our government recognizes no limitations to its powers. From unconstitutional intrusions in education, welfare programs, housing, the economy, the Federal Reserve system, to federal obtruding in health care, gun rights, and regulatory agencies—the Federal Government, through many years of  continuous Constitutional neglect, has become a leviathan state. 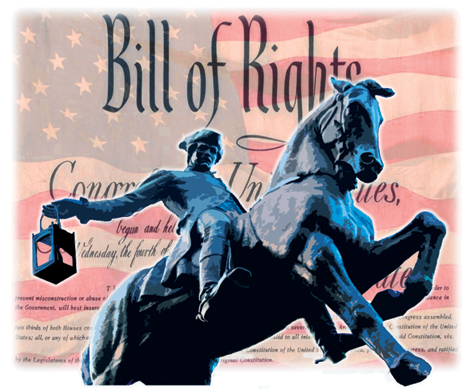 2) Our Freedoms and Liberties are the Gift of God. Every Founding Father of this nation freely stated that this is the case. We cannot, as a people and country, continue to ignore and/or legislate God out of the public arena and at the same time enjoy the blessings and benefits that can only flow from God and a God-centered world view. This key ingredient to patriotic statecraft must be reinstated if America is to survive in the future.

3) Historical Verification of the Superiority of the American Constitutional System. Never in the annals of history have a people enjoyed such great liberty and prosperity. Search as one may through the records of all civilizations past and present, one will never find a more efficient system to protect individual freedom than is found in the republican style statecraft as found in America. ALL other systems—fascism, socialism, communism, Nazism, monarchies or oligarchies—have never adequately protected the rights of mankind nor produced a free and productive society. If modern-day thinkers, whether in ivory-towers or in the armchairs of their living rooms, do not lay aside infatuation with socialist-style expansionist government, we will lose our liberties. A fair comparison of our organization of government with other nations reveals a far superior system.

4) Our Constitution Has Been Undermined. A cursory reading of our past 100-year history evidences that our leadership in the political and cultural arenas have, with decided effort, embarked on a program of Undermining Our Constitution which has created a “lawless government.” Americans have almost reached the point against which Thomas Jefferson warned when he stated that if we wandered outside the constitutional boundaries set by our Founding Fathers we will experience a “government as venal and oppressive as the one from which we separated.” This has occurred by a planned, systematic dismantling of our republic, not by an aimless wandering.