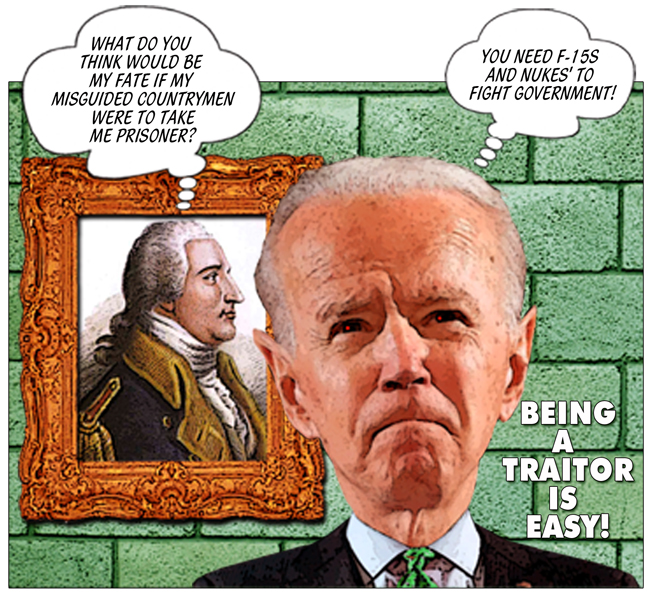 Betrayal is the greatest inhumanity. Betrayal’s wound lingers with a sickening feeling, it fuels insecurity and crushes the spirit of those targeted. Betrayal is prodded by narcissism, nurtured by monetary gain, fueled by power and ruled by selfish ambition. The betrayer never acknowledges his black deed and evil motives. The result of betrayal is never the imagined reward when the dark deed is conceived. The tempting bait, seducing the betrayer, is always for “the greater good.” Too late is the self-centered heart revealed; the exaltation and applause once sought are erased by disgrace. The traitor absurdly attempts to justify the betrayal. These laughable justifications highlight the guilt of those involved in treachery. The traitor’s true motives will be exposed. The selfish ambition prodded by money and power will be uncovered. In the end, nothing is gained and all is lost.

The Lord addressed selfish betrayal by asking, “What good will it do a person if he gains the whole world, but forfeits his soul? What will a person give in exchange for his soul?” (Matthew 16:26). Bluntly asked is the piercing query, “How much will it take to buy your soul? What is your integrity and fidelity worth?”

The sale of integrity is a tragic historic constant. This is especially true with political integrity.

Betrayal on a personal level is devastating. Betrayal on a national level is absolute destruction. National betrayal undermines civility and replaces it with an “improved” system imagined by the arrogant mind. This political operation is in the realm of fantasy and not fact.

Treacherous betrayal is as old as human civilization. History’s redundancy reveals that humans never learn; they are always recycling the failed chicanery of the past. There has been and will continue to be arrogant evil politicians attempting to destroy civility. The Psalmist mournfully said, “The wicked bend the bow, they have set their arrow on the string to shoot in darkness at the upright in heart. If the foundations are destroyed, what can the righteous do?”

The intent to punish opposition is designed to subvert the prevailing rule of law and replace it with the elitist arrogance (after all betrayal is predicated upon the betrayer thinking s/he has the better scheme, better politics, better formula for the greater good and those refusing compliance are deserving of punishment).

Incredibly this is the predicament where our nation stands at this moment in civilization’s history. Good is evil; evil is good; up is down and down is up! The absurdity is framed by the fact that truck drivers’ pets are seized because the politicians need to retaliate against those suggesting that each human has basic personal rights. So, the oppressive government seizes the hapless animals! And the population of the world is told to believe this punishing action is for “the greater good”?

Over the past years, the history of our body politic in the USA has exposed the disintegration of our Republic’s foundation. No longer are personal freedoms assured. Our freedoms have been assaulted by a seditious tyranny masking the treasonous treachery of those viewing themselves as the “Rulers” over the “ruled.” Anything less than consent and conformity to the Rulers mandates is instantly punished. The basic rights of justice for all that is meted by a consistent standard has been trashed—the obvious criminals are freed and the peaceable are detained. And the ruling body politic is criminally silent!

These events are the historical recycling of a malicious corruption of the government’s “Rulers.” These have seized a role never designed in our governing statutes.

If this is a historical recycling, where is the precedent of historical traitors betraying the trust given them with tenacious treason? Many examples suffice: Christ had His Judas, Caesar had his Brutus; Alexander the Great had his Eumenes; and George Washington had his Benedict Arnold.

Because of the toxic environment of our current national politics, I have enjoyed rereading the “American Revolution” series by Nathaniel Philbrick. The second volume focuses upon the treachery of Benedict Arnold. Several observations regarding Arnold’s actions illustrate the current crisis in the USA.

• Never worried about the consequences of his actions—guilt was simply not a part of his makeup. Rules were made to be broken—Arnold did whatever Arnold wanted.

• He presented his national interests as “the nearest in his heart and the first in his wishes” even as he disclosed military secrets to the enemy. It is wanton hypocrisy by a public official.

• What he was doing was first and foremost for money—he priced his soul for 10,000 pounds!

• He was magnificent in his fearless and pugnacious pride—pride and arrogance. (I’m sure that he would give a devilish smirk in tearing up a SOTU speech!)

• He attacked the integrity of his accusers by innuendo and insinuations. He claimed his accusers were not patriots and he was the genuine hero—amazing projection of his evil onto others!

• His faith in his own honesty justified his treason—he was delusional!

• He thought he could serve his country best by being a traitor—delusional fantasy ignoring facts.

• He promised retaliatory killing of epic proportions unless his ultimatums were followed—he displayed an amazing tenacity to sacrifice country for selfish ambition.

• His decision to sell his loyalty to the highest bidder was rooted in a self-serving opportunism masquerading as patriotism.

NOTE: Take each of the above points and list a current politician’s speech and action with the exact act. Those crying conspiracy are themselves guilty; those projecting crimes and hate-speech are themselves guilty; those crying against “undemocratic” and unpatriotic” are the “insurrectionist in the mirror”; those boasting
of their “love” for our nation prompts them to enforce the mandates, speak with empty platitudes masking their own devilish agenda! Every action today that betrays civility and punishes personal freedoms is found in Benedict Arnold’s biography. Let the Executive, Legislative and Judicial Branches hear this fact!

Philbrick cites Arnold’s sanctimonious defense before the military court. “I stand stigmatized with indelible disgrace, the disgrace of having abused an appointment of high trust and importance, to accomplish the meanest and most unworthy purposes: the blood I have spent in defense of my country will be insufficient to obliterate the stain” (258). How accurate Arnold was in his assessment—all he had done was “insufficient to obliterate the stain” of his treacherous treason!

Nathaniel Greene aptly summarized Arnold’s treachery, “How black, how despised! Loved by none and hated by all. Once his country’s idol, now her horror.” Let the politicians and bureaucrats on the Local, State and National levels listen to history. For how much are you willing to sell your integrity? Whatever your price,
you will find the amount insufficient to obliterate the “stain.” Regardless of the imagined profits your sellout only impoverishes you here and hereafter.

A failure to demonstrate integrity in upholding the Constitutional Rule of Law is inexcusable. It is irrational. It is a choice to join Benedict Arnold as the historic byword for treachery. A failure to stand up, speak out and fight for the personal freedoms guaranteed by the Constitution exposes your true character as a selfish
opportunist fearful of retaliation.

When traitors use treachery, the nation’s foundations may be destroyed. But, those guilty of bringing ruin and those guilty of permitting ruin will not escape. History assures that their diabolical, scheming arrogance will “stain” their reputations. And that “stain” forever taints their souls. The Psalmist’s alarm (cited above) that the
foundations are destroyed is answered later in the passage: “The Lord tests the righteous and the wicked, and His soul hates one who loves violence. He will rain coals of fire upon the wicked, and brimstone and burning wind will be the portion of their cup” (Psalm 11:5-6).

Let the traitors devise their treachery so their treason is accomplished. Let them cling tenaciously to their evil. But they will never find satisfaction in their betrayal. A contented joy will never comfort their hearts neither here nor hereafter! Their eternal eulogy will be “you have given yourself over to do evil in the sight of the Lord.”