Bill Lockwood: Deep State Government—A Life of Its Own 4 (1) 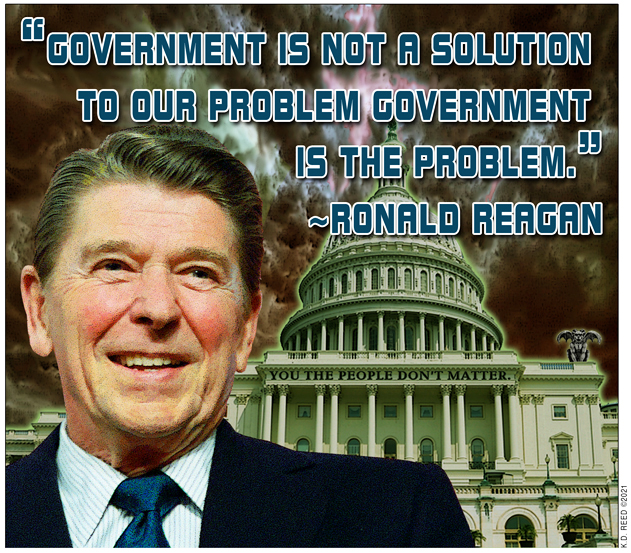 Anyone who has witnessed either a community or a church tearing apart because of rumors, gossip, innuendo’s and idle talk can testify to the fact these types of troubles sometimes take on a life of their own. The general feeling is that, at some point, as situations become more aggravated, one cannot stop it. Whatever may be the initial cause and regardless of how that problem may have become settled by the initial participants, the issues continue to live. This is simply human nature.

The principle is the same with the nature of government, since government is only comprised of fallible humans. The very reason our Founders insisted upon a small government is not only because all of human history demonstrates suffering of individuals at the hands of their own political leaders, but that governing systems that become too large with power gravitating to a central office are unable to be effectively controlled by individuals—in spite of the fact that it is to be “of, by, and for the people.” It is individual freedom that they were after.

Thomas Jefferson bluntly observed that he wanted government simple. “I am for government rigorously frugal and simple.” As far back as 1824, he criticized the size of our government. “I think, myself, that we have more machinery of government than is necessary, too many parasites living on the labor of the industrious.” This was not merely personal preference. It was wisdom speaking.

Carelessly casting aside the warnings of the Founders, Americans have allowed all power to coalesce to Washington, D.C. The impediments placed in the Constitution by the Founders to forestall the growth of power are antiquated relics of dusty history. And the sociology of the situation is such that this gigantic leviathan that we have suffered to rule now takes on a life of its own. Some call it The Deep State. Others, The Establishment. Still others referred to it as The Shadow Government.

Whatever label we might put upon it, there is clearly a legion of government bureaucrats deeply buried within the halls of government. These bureaucrats are totalitarian in nature, communist in orientation, and pound out numberless rules, regulations, decrees to control the lives of once-free Americans. It is a fantasy that our elected leaders are in control.

Consider the presidency of Donald Trump and only one small sampling of the Deep State at work.

We now learn that the Justice Department, and specifically its investigative arm, the FBI, while Trump was the chief executive officer of the United States, illegally surveilled Trump’s lawyer Rudy Giuliani during his conversations with Trump on iCloud. This occurred during the manufactured “Russiagate” scandal—pressed by Democrats and the MSM.

Not only was the entire “Russiagate” a red herring, born and bred within the inner recesses of our own government, but the Justice Department itself acted in Mao-like fashion against its own sitting president. Here is the totalitarian “permanent state” or cabal working to destroy Trump from within.

Siding with the rogue FBI is the MSM—The New York Times, The Washington Post, and NBC News—who have now been forced to retract incorrect stories about Rudy Guiliani. They all falsely reported that he had been briefed about the “Russian intelligence influence operation” that had supposedly targeted him. Never mind the clear evidence that was on the table involving the entire Biden syndicate in laundering money from foreign nations. Go punish Guiliani and Trump.

Now more. Within the last two weeks federal investigators carried out a search warrant at the home and office of Guiliani because of his alleged ties to Ukraine — all based upon incorrect information (see Epoch Times, 5-2-21).

Alan Dershowitz, a constitutional lawyer, openly stated that the FBI’s raid on Guiliani’s apartment violated the Constitution. “This was just a misuse of the search and seizure power. Initially, it was turned down; now it was approved, both by a judge and by the attorney general of the United States, so it wasn’t lawless action, but I believe that they acted inconsistently with both the spirit and the letter of the Constitution and that there should be remedies of it.”

Kash Patel, the lawyer from Queens, New York, who served in senior posts during Trump’s Administration, including senior advisor to the Director of National Intelligence, is also facing a “Justice Department investigation.” Patel had assisted Rep. David Nunes’s investigation of crimes and abuses committed during the FBI’s operation targeting the Trump campaign. He had helped uncover the Democratic-led hoax called “Russiagate.” This is too much for the Democratic-controlled government. Patel is facing payback–an “official” Justice Department investigation.

Apparently, Donald Trump was president “on paper only.” Americans have lost control of their government. The Swamp has always ruled, and now with the Biden Administration they are ensuring no one like Trump will ever take office again. Government “of, by, and for the people” has indeed “perished from the earth” – at least for now.