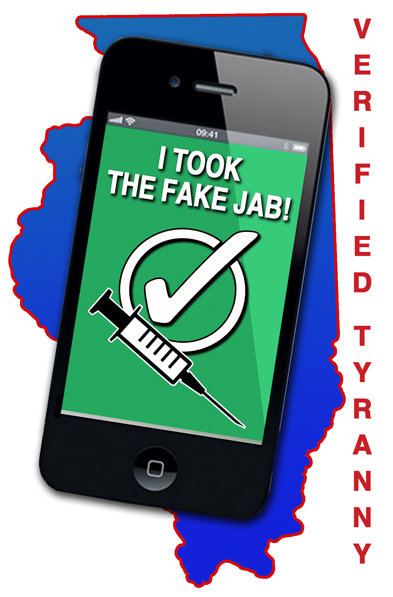 On August 11, 2021, the Illinois Department of Public Health (IDPH) announced it had created a portal called “Vax Verify” that will allow individuals to easily show their vaccination status to businesses and other entities.

Although officials did not label the “Vax Verify” system as a “vaccine passport,” in reality, it is essentially identical to the other vaccine-passport apps used in other states such as California, New Jersey, and New York. Furthermore, this portal gives businesses, government entities, and other institutions the ability to deny services to unvaccinated individuals.

The IDPH’s director, Dr. Ngozi Ezike, confirmed the portal’s intent to enable vaccine passports. He stated, “As more businesses, events, organizations, and others require proof of vaccination, Illinois residents will be able to confirm using Vax Verify that they have been vaccinated for COVID-19.”

Additionally, Illinois local officials had previously, and publicly, discussed implementing “Vax Passes” that are nearly identical to the current “Vax Verify” system. This system is a first, and necessary, step toward further and more extreme actions.

Already, multiple Illinois businesses have mandated that customers have the vaccine in order to do business with them, while certain portions of the Illinois State Fair are requiring individuals to be vaccinated. Furthermore, Illinois and Chicago officials are working on an even broader vaccine passport system.

The “Vax Verify” system also has serious privacy problems. For example, the program requires individuals to verify their information through a specific credit-tracking company, and it could allow businesses to track individuals. According to the Electronic Frontier Foundation, Illinois’ vaccine passport system is “one of the worst.”

In addition to implementing vaccine passports, Illinois is implementing a vaccine mandate, joining other states, cities, and federal agencies. On August 11, Illinois Governor J.B. Pritzker announced that all state employees in “high-contact settings” will be ordered to get the coronavirus vaccine. This is likely a first step toward broader and more tyrannical mandates.

Illinois’ vaccine passport and mandate schemes are steps toward the creation of a social-credit system, where unvaccinated individuals are discriminated against and unable to fully participate in society. It is also the beginning of a digital health ID, which denies individuals their privacy in medical matters.

Illinois’ vaccination policies are only the latest actions taken by the state to promote a leftist, anti-freedom agenda. In recent years, for example, it has enacted anti-police and pro-crime legislation, ordered teachers to promote sexual deviancy and indoctrinate their students with far-left ideology, ratified the Equal Rights Amendment 36 years after the deadline expired, and imposed stringent lockdown measures in 2020. As evidence of Illinoisans’ dissatisfaction with their state’s economic and political condition, it has been ranked among the top states to abandon. Furthermore, Illinois was one of only three states to see a population decline in the 2020 Census.

If the Illinois General Assembly has any respect for the U.S. Constitution, it will put an end to the state’s vaccine passport and mandate schemes. Furthermore, citizens in Illinois and other states would be wise to follow Senator Rand Paul’s advice and “simply say no” to the various mandates and other restrictions imposed by all levels of government.

Illinois residents can contact their legislators in opposition to the state’s vaccine passport and mandate policies by visiting The John Birch Society’s legislative alert here. Everyone can take action against forced vaccinations in their respective states by visiting JBS’s national and 50-state alert here.