Mike Maharrey: While You Were Obsessing Over Impeachment 0 (0) 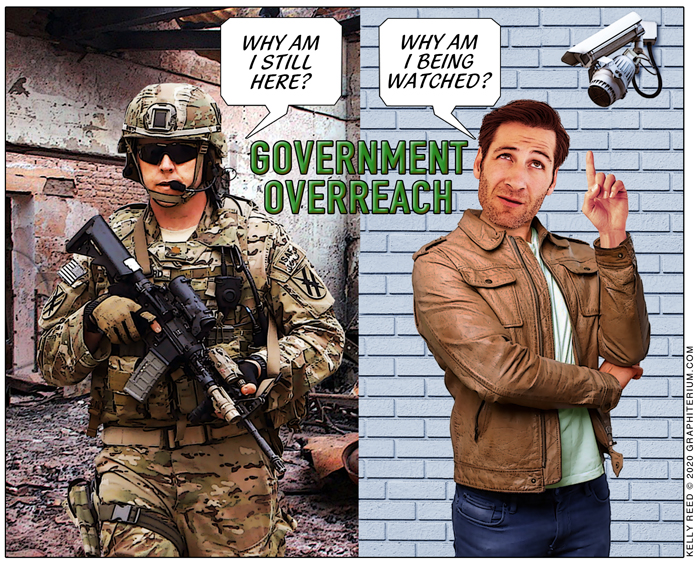 Well, they did it!

The House impeachment hearings were little more than political theater — a partisan fistfight with the majority party coming out the “winner.” In the process, it created the illusion of deep division and disagreement. Devoted Democrats and Republicans are both convinced that their team is fighting for their interests against a determined foe on the other side of the aisle.

But while everybody obsessed over the political theater playing out on CNN, Fox News and MSNBC, they completely missed the sideshow that could actually impact their lives. Even as Democrats and Republicans engaged in a contentious public spectacle in the media spotlight, they worked in concert behind the scenes to steal your liberty and your wealth.

While you argued over the gory details of impeachment with your friends on Facebook, Congress passed the 2020 National Defense Authorization Act. The nearly 3,500-page bill authorizes $738 billion in defense spending in Fiscal Year 2020. It creates a “Space Force,” so the U.S. can expand its empire into the cosmos. And Congress rejected a provision that would have made it just slightly harder for the president to unilaterally send American troops into combat. In other words, Congress agreed that it would not bother to do its job and declare war before sending the U.S. military to conduct offensive combat operations as required by the Constitution. It will continue to let the president make that call on his own. You know – the president the House just impeached.

Even worse, the current iteration of the NDAA extended provisions written into the 2012 National Defense Authorization Act that effectively authorize government kidnapping. The vaguely worded sections purport to authorize the arrest and “indefinite detention” of anybody the president decides might be associated with “terrorism” and subject them to the law of war. In effect, the government can deem you a terrorist and lock you away without due process. Government kidnapping may sound like hyperbole, but that’s exactly what the NDAA authorizes in effect.

Speaking of war, while all eyes were glued to the three-ring circus in D.C., the Washington Post released documents revealing that the U.S. government has been lying to us about the war in Afghanistan for decades.

“A confidential trove of government documents obtained by The Washington Post reveals that senior U.S. officials failed to tell the truth about the war in Afghanistan throughout the 18-year campaign, making rosy pronouncements they knew to be false and hiding unmistakable evidence the war had become unwinnable.”

As one three-star general put it, “What are we trying to do here? We didn’t have the foggiest notion of what we were undertaking. If the American people knew the magnitude of this dysfunction .?.?. 2,400 lives lost.”

This seems, maybe, just a tiny bit, significant. But the news barely saw the light of day. It was completely buried under an avalanche of impeachment reporting.

The sad truth is that these papers that have been mostly ignored provide legitimate grounds for impeachment – not just of Donald Trump, but Barack Obama and George W. Bush to boot. But when it comes to war, Congress maintains a bipartisan consensus supporting the endless, unconstitutional foreign interventions and the presidents who run them. And the media is complicit, focusing on the fake wrestling matches on Capitol Hill instead of reporting on real wars

And while we’re on the subject of bipartisan consensus, let me remind you that Congress reauthorized sections of the Patriot Act in the latest stopgap spending bill. This means the federal government will be able to continue to spy on you without a warrant and in complete disregard of the Fourth Amendment. Rep. Thomas Massie (R-Ky.) predicted it would happen.

Today, while everyone is distracted by the impeachment drama, Congress will vote to extend warrantless data collection provisions of the #PatriotAct, by hiding this language on page 25 of the Continuing Resolution (CR) that temporarily funds the government. To sneak this through, Congress will first vote to suspend the rule which otherwise gives us (and the people) 72 hours to consider a bill. The scam here is that Democrats are alleging abuse of Presidential power, while simultaneously reauthorizing warrantless power to spy on citizens that no President should have… in a bill that continues to fund EVERYTHING the President does… and waiving their own rules to do it. I predict Democrats will vote on a party line to suspend the 72 hour rule. But after the rule is suspended, I suspect many Republicans will join most Democrats to pass the CR with the Patriot Act extension embedded in it.

And indeed they did.

And finally, while Congress-critters battled it out on the House floor, behind the scenes, congressional leaders worked with the Trump administration to hammer out a $1.4 trillion spending agreement. According to an Associated Press report, the deal “fills in the details of a bipartisan framework from July that delivered about $100 billion in agency spending increases over the coming two years instead of automatic spending cuts that would have sharply slashed both the Pentagon and domestic agencies.”

So, let’s review. While America was mesmerized by the pro-wrestling event on Capitol Hill, Congress agreed to maintain the government’s “authority” to kidnap you, to keep spying on you without a warrant, to continue unconstitutional wars, and to spend you deeper into debt.

Political theater makes for splashy headlines and heated debates, but it really has very little impact on your life. The political class, including the mainstream media, would prefer you pay attention to the fluff, not to the things that really matter. Perhaps instead of obsessing over impeachment or the latest debate over a Trump tweet, you would be better served to pay attention to what they don’t want you to pay attention to.

Michael Maharrey [send him email] is the Communications Director for the Tenth Amendment Center. He is from the original home of the Principles of ’98 – Kentucky and currently resides in northern Florida. See his blog archive here and his article archive here. He is the author of the book, Our Last Hope: Rediscovering the Lost Path to Liberty. You can visit his personal website at MichaelMaharrey.com and like him on Facebook HERE