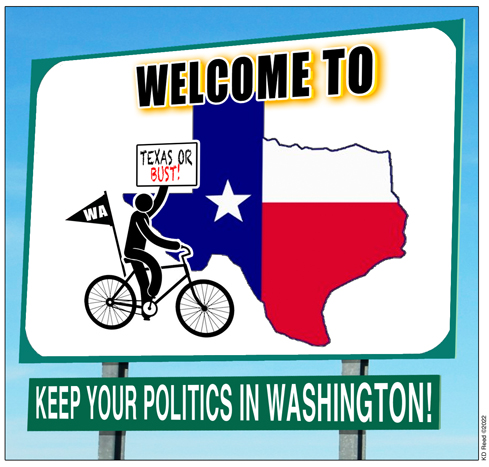 Living in the state of Texas is a blessing. Sound conservative State government continues to make Texas the best place to live, work, run a business, and enjoy life. Even with the impacts of grossly poor Federal leadership in Biden’s first year, Texas continues to fight for its people. We are not insulated from BidenFlation of fuel price and near every other staple, but at least we do not have a liberal State government piling-on other burdens.

Citizens of other states are not as fortunate. Recently, Washington State acted to pass future extreme restrictions on their citizen’s choice of personal transportation. The law sets a near future requirement for all personal and commercial light duty vehicles to be electric. In order to purchase, register, or drive in Washington by 2030, you will forced to use an electric vehicle. They say this is absolutely required in order to demonstrate that the number one fear-mongering tactic of Democrats is real and serious. You know, global warming. No, it is not warming, so now they call it “Climate Change” and any storm, fire, or natural weather event is now blamed on “Climate Change.” Whether real or not, and how serious Climate Change may be, is a subject for another day. For today, mandates by government that restrict people to uneconomic and infeasible positions is wrong- regardless of any purpose. Typically, behind such poorly conceived mandates, there will be private sector winners and losers, and likely the winners are somehow funneling money into the elites in power.

Why is mandating electric cars in one State wrong? First, there is no science that says electric cars lower emissions. The electric power grid in the US is primarily served by fossil fuel power generation. Natural gas is the fastest growing form of electricity generation, coal is still over a third of power generation. But the cars run on wind and solar, right? No, wind and solar power are growing, only because of tax dollars funneled into subsides, but the small amount of wind and solar is not what makes the newly required electricity. The growth in electricity demand, if all transportation were electric, would out -pace the grow in wind/solar power ten-fold. So, Washington State’s cars will run on coal, with CO2 emissions similar to gasoline, just relocated away from the state by power lines.

The facts of power supply and demand make Washington State’s mandate meaningless for emissions, but how will the mandate hurt citizens? First, electric cars are about twice as expensive as the similar gasoline car. So, double the car note. Yes, but then it is “free” to drive. No, power to charge the batteries is at least as expensive as gasoline. How about the power distribution capability in your neighborhood? An electric car quick-charging home unit is typically 75 Amps of power draw; most normal homes have a total power supply of 100 Amps. So, if everyone on the same street gets a 75Amp car charger and plugs in at 7pm, the supply lines will overload and trip off. The government of Washington State does not have a newly designed power distribution network that is 175% expanded in their 5 year plan. So, the short-sighted mandate just might put the citizens of Washington State out in the dark.

If subject to the Democrat elites in Washington State, the best plan would be to leave the State and bring productivity and taxes elsewhere. Those who fail to grasp facts and fall for this political nonsense should make sure the bicycle is serviced and have a good supply of candles. Those that leave the dictates are most welcome in Texas, the land of the free and fearless. Just do NOT bring the liberal nonsense that has destroyed the Sate you are fleeing.