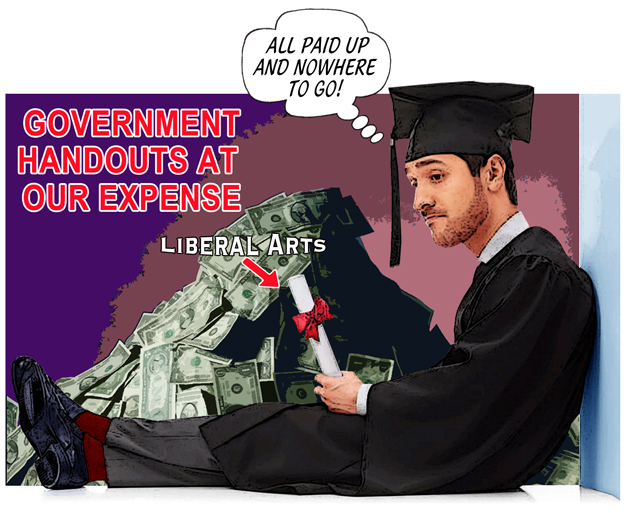 One of many reasons to oppose the philosophy of socialism, which has its tentacles wrapped around America, is that it distorts one’s thinking. Being engulfed in it for longer periods, as Americans have been for many decades, makes it doubly-hard to rehabilitate the reasoning process. Consider Student Loan Debt, which Democratic leaders have long pressed for, and Joe Biden is now contemplating.

Outstanding Student Loan Debt in America for 2020 is approximately $1.75 Trillion, which breaks down to about $40k average amount per borrower. Statistics also show that 43% of all college attendees have taken on debt, this includes money loaned through federal and private lenders. Biden’s socialistic plan is to “cancel” this student debt, which really means, shifting the burden of loan debt onto the backs of the American taxpayers.

To see how any type of socialism, including “forgiveness” of student loan debts, actually short-circuits the reasoning process, think on this. I recently reposted a picture on Facebook that mimicked the fact that the modern generation is “drowning in student loan debt” while at the same time spending their money on “Starbucks, Useless Majors, Cable TV, New I-Phones, Tattoos, Gucci and Cocaine.

That highlighted what are the undeniable facts of a large percentage of collegiate students today while opposing the Biden plan. One person replied that that post is “kind of making assumptions.” In answer, I simply went to the heart of the matter. “It is wrong and sinful to steal from some and give to others.”

Further, many of the degrees now obtained by Generation Z are worthless from the practical standpoint of making an honest living. Assuming the Democrat plan comes to fruition, hardworking blue-collar laborers such as welders, truck drivers, and machinists, who wisely skipped the “collegiate route” for their occupations, are now being forced to pay off those huge loans for the millennials who frittered away their loans with “Anthropology” or “Ethnic and Civilization Studies” degrees.

Now comes the interesting part. My Facebook respondent retorted: “Your posts are not speaking with God’s love! … Not everyone was born with a silver spoon in their mouths. If they can’t afford to pay that loan back, tell me what should they do?”

The answer is simple, I responded. “No doubt people have burdens that they cannot carry alone. However, your solution should be, ‘I (my name), will personally assist you.’ How can you say, ‘No, I am going to empower my government to forcibly take it from my neighbor, Bill Lockwood, and that’s how it will be paid back.” I could not help but add, “And for you to lecture any of us who object to Government theft and redistribution by saying, ‘you need more love of God’—comes with poor grace.”

Just to be clear here. If any of the socialist-liberals today wish to select a college student and voluntarily help them pay off student loans. Go for it. That is God’s love. But to support an unconstitutional move that utilizes dictatorial government power to shift the burden of financial responsibility onto the backs of other people without their consent—that is not Christian.

This is the stuff of which dictators are made. Socialistic force has nothing to do with the love of God.

Apparently, this particular respondent got the point regarding force. “You’re right. No one should be forced to do for others.” But blindness remains, for big government force is still the answer to these types of liberals.

It would be good to remember here the maxim reputed to have come from George Washington: Government is not reason, it is not eloquence,–it is force! Like fire, it is a dangerous servant, and a fearful master.”