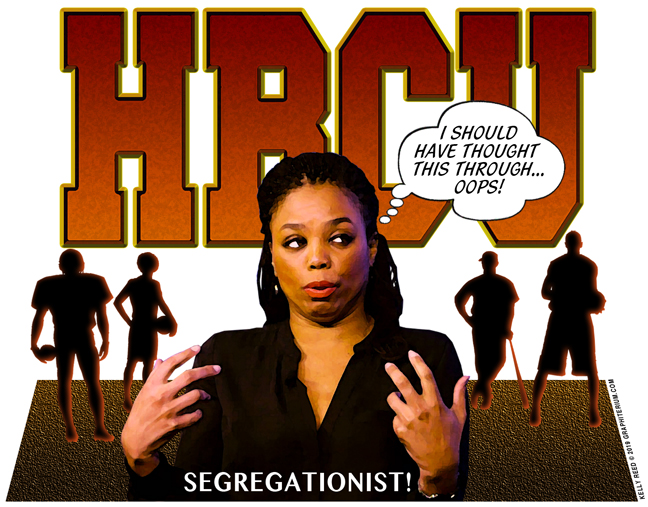 Hill says black athletes help attract money and attention to “predominately white universities that showcase them,” while Historically Black Colleges and Universities (HBCUs) continue to struggle. She writes that mostly white schools’ multibillion-dollar revenues have been built on the “exertions of (uncompensated) black athletes.” She also says that black students “feel safer, both physically and emotionally,” at an HBCU.

On May 17, 1954, the U.S. Supreme Court declared with Brown v. Board of Education that segregated schools were unconstitutional. Sixty-five years later, Jemele Hill wants black athletes to stay out of predominantly white universities and colleges – the late segregationist George Wallace would be proud! Hill is feeding poisonous lies to young blacks. Her divisive message of hate, blame and victimhood is not about helping blacks; it’s about gaining fame and getting back at whites for “racism” and slavery.

Jemele Hill is a hypocrite. She attended Michigan State University – a predominantly white institution. She used her degree to get a job at ESPN (a liberal white company). She was later fired by ESPN in 2018 after she continuously lied and tweeted accusing President Trump of being a “white supremacist” and a “bigot” who was “unqualified and unfit to be president.” ESPN initially declined to punish her for the tweet, but then sidelined her for two weeks in October 2017, after she violated the company’s social media guidelines again. Another violation occurred when she called on fans to boycott advertisers of the NFL’s Dallas Cowboys after owner Jerry Jones told players they would be benched if they did not stand up during the national anthem.

Hill’s call for black athletes to forgo attending predominantly white universities is dumb. Student athletes want to attend schools that offer the best opportunity to excel in the classroom and on the field or court. They’re looking for colleges that have great coaching and high visibility, and HBCUs cannot offer student athletes the same opportunities.

For decades, liberal blacks have been complaining about the lack of “diversity” and “inclusion,” and whites have given in to all of their crazy demands. Blacks and whites participated in the civil-rights movement and fought for integration. Now Hill wants blacks to separate from whites. And many black liberals in academia and in the Democratic Party agree with her.

I’ve always been opposed to forced integration. I believe that once laws were changed to allow blacks equal protection and the freedom to move around freely, blacks and whites would have naturally come together based on character and common values.

The real reason HBCUs are declining is because the alumni don’t give back. Alumni giving at HBCUs are the lowest in the country around 12 percent. HBCUs rely more heavily on federal, state, and local resources than other institutions.

As much as Jemele Hill hates President Trump, he has done more to help HBCUs than Barack Obama. Less than a month into his presidency Donald Trump met with education leaders and signed an executive order reaffirming support to Historically Black Colleges and Universities. According to the Department of Education records, in 2018 Trump appropriated more than $360 million – $32 million more than Obama – but there is no mention of this in Hill’s article.

I grew up in Alabama near Tuskegee, home of Tuskegee Institute founded by the late great Booker T. Washington. Tuskegee used to be a top-notch institution where blacks went to get a real education that prepared them for the real world. Truckloads of black Americans graduated from Tuskegee and went on to become successful. Many HBCU graduates, including members of my family and friends, went on to become doctors, teachers, nurses and skilled tradesman. And because they had good parents, morals and sound work ethic, they went back to where they came from and enhanced their communities.

Today, most HBCUs are a joke. They offer lousy programs, and most of the students are not serious. The schools promote useless degrees focused on “Social Justice,” “Critical Race Theory” and “Pan-African Studies.” HBCUs should be made into trade schools or disband.

Should student athletes be compensated? Student athletes get scholarships to cover tuition, but if the Fair Pay To Play Act passes, California student athletes may be able to make money from the use of their names, images and likenesses. I don’t have a problem with student athletes being paid, but this should be something that is worked out with the NCAA and athletes. Jemele Hill’s call for segregation is not about helping black students; it’s about hating whitey and promoting her career.

Until black people stop hating and blaming whites, they will always feel inferior, and they will continue to be misled by race hustlers.