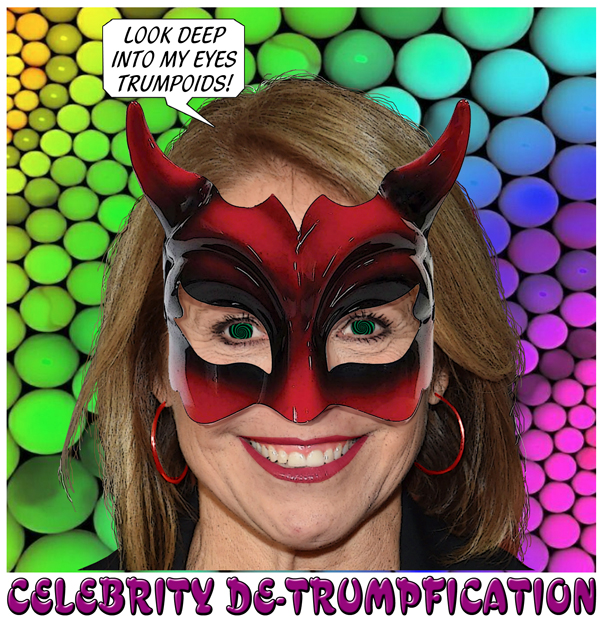 Katie Couric, former co-anchor of NBC’s “Today” show as well as anchor of “CBS Evening News,” shows how far afield the liberals in America have gone. Last week she was a guest on “Real Time with Bill Maher.” She commented on Trump supporters.

I mean, it’s really bizarre, isn’t it, when you think about how AWOL so many of these members of Congress have gotten. But I also think some of them are believing the garbage that they are being fed 24/7 on the internet, by their constituents, and they bought into this big lie. And the question is now, are we going to really almost deprogram these people who have signed up for the cult of Trump?

According to Fox News, media critic and Cornell Law School professor William A. Jacobson warns that these types of “threats of ‘deprogramming’ Trump supporters have become common among liberal journalists.”

Not to be outdone, Hillary Clinton called for all 70 million Trump supporters to be identified as “Domestic Terrorists” in a recent Washington Post op-ed (1-12-21). This is a downgrade from a “basket of deplorables.” She openly suggested Trump supporters be tracked and “surveilled,” because Trump “whipped a dangerous element of our country into a frenzy.”

No idea is so grotesquely extreme but that it is offered with straight face by an academic. Dr. Robert Asher, an evolutionary zoologist at England’s Trinity Hall and one-time contributor to Huffington Post, posited that a “parasite” has infected the brains of conservatives who voted for Trump and who supported Brexit in England. He went so far as to name the parasite as “Toxoplasma gondi” which causes severe mental disorders and behavioral problems.

Besides the obvious fact that the left sounds much like Adolph Hitler, in spite of their continual hurling the charge of “Nazism” to those on the right, shows where the true Nazi’s are encamped– consider the following.

First, these kinds of condescending and elitist comments demonstrates that with the liberals, they believe they have won the entire war with the defeat of Donald J. Trump. Occasionally, wild-eyed comments like these are made in the halls of academia, but it is not frequent that these types of statements are doled out publicly and with regularity. The Socialistic Establishment is back in control with Biden and these types of remarks indicate that the Left does not believe it will ever swing back the other way. With an air of triumphalism of a final battle the Left now is becoming uncorked in their aggression. If there ever was an inkling of thought with these socialists that in four more years another “Trump” would be elected, it is unlikely they would freely speak about “re-education” camps for conservatives, or mental illnesses on the Right.

Second, the idea of reconciliation between the Right and Left is a chimerical idea. It is a fantasy. It always has been. The gap between these two poles is so wide that the North-South War Between the States looks small in comparison. But that was an armed conflict! you say. Indeed, it was, but the worldview between southerners and northerners in the 19th century was not as wide as it is now. And “re-education camps”—as the left now banters about—speaks of gulags and barbed wire, not reconciliation.

Third, the blaming of Trump for whipping the Right into a “frenzy” is a snobbish and ignorant view. Hillary Clinton wants to censure Trump and all of those who supported him on the grounds that he stirred the masses unnecessarily. Being “whipped into a frenzy” has nothing to do with the Biden’s threats to cancel the Second Amendment; the Open Borders policy which has already attracted huge caravans of Third World illegals on their way to crash our borders with promises of free taxpayer money; the mandates from the Left that we recognize Sodomy as a legitimate institution by law; the plans to eliminate the right to private property as dictated by “The Great Reset” of the United Nations; the robbing of the American worker to pay for those who do not work; the indoctrination of our youth by Marxism in the education system; the murder of the unborn since 1973—no. Nothing to do with that. It is all about Trump “whipping people into a frenzy.”

Fourth, these elitists, including Bill Maher and Katy Couric, fall on their own sword. If their worldview is correct, that all is matter in motion, and there is no God, then there is no such thing as rational thinking to begin with. Everything, including my brain, operates solely on a system of naturalistic causes. All is solely the result of chemical reactions and physical pressures inside one’s skull. There is therefore, no such thing as “rationality.” That being the case, perhaps it is those on the LEFT who need “re-programming.” No opinion can be right or wrong, no more than a current of electricity can be so calculated.

So, who needs re-programming? It just depends upon who is in power, doesn’t it?