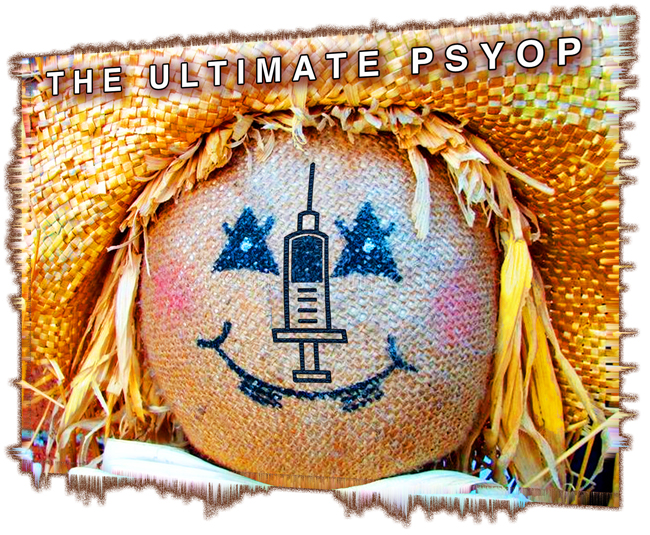 A point stressed from the beginning of this scamdemic—the manipulation of man by fear is fueled by mass hysteria causing a visceral response rather than a cognitive response. Basically, hysteria causes us to have a “knee-jerk” reaction without thinking through the issue. God wants us to make decisions based upon “reason” (Isaiah 1:18).

You can take a kernel of truth and fabricate an amazing scenario around it and convince a population of an untruth—think of the fable “The King’s new clothes.”

Realize that fears associated with physical health are among the strongest in the human psyche. This makes health issues a primary fulcrum in psyops. If you can “sell” a better vitamin, an amazing supplement, or a vita-packed juice drink, your profits will be amazing. Health sells like no other product. BUT disease sells better! And this is exactly what we have in the manipulative marketing of COVID-19!
Those who surrender to fear’s manipulation will act contrary to trust and confidence in God’s provisions. Fear will motivate people to trust in unstable security. Jeremiah rebuked Judah because the nation acted from fear Psyopsrather than from trust. Sarcastically Jeremiah chided Judah’s sources of her strength saying “They are like a scarecrow in a cucumber field, and they cannot speak; they must be carried, because they cannot walk! Do not fear them” (Jeremiah 10:5).

From the beginning of this “pandemic” I have refused to trust “a scarecrow in a cucumber field”!
A point has often been stressed in the past years—we are in a war! While there has been violence in this war (BLM/ATIFA), currently the major thrust is a “psyop” that is more effective than a bullet. Those involved in the analysis and dissemination of psyops are more victorious than the public realizes. These operations are often in the unseen realms and seldom are they known.

Here is an undeniable fact—You are a target of psyop actions whether you acknowledge it or not. Years ago, I took a psychology course at University of Alabama in Huntsville that taught “reconciliation of behavior through thought.” It was very interesting and informative—you plant a “thought” and then design and suggest behavior to conform to that planted thought. The class focused on the advertising sector but the principles applied to business, religion, culture, and even military. That class initiated interesting actions that have literally been worldwide.

Let me dare to suggest that you are currently targeted by one of the most intriguing psyops ever foisted upon modern civilization! And most are totally unaware.

Here are some thoughts on this situation.

An innocent but interesting link provides the most elementary mechanics of such operations. This is from Intelligence 101: PSYOPS: The ULTIMATE Guide to Psychological Operations (PSYOPS). At this link you will read the necessities for a successful psyop maneuver. “PSYOPS are used at all levels (strategic, operational and tactical) to influence policy, decisions, command, and the will of the target audience. PSYOPS targets a groups’:
• will to fight,
• will to obey, or
• will to support.
PSYOPS are designed to shape the behavior that supports national policy objectives and the Commander’s intentions.”

Biblically this mental maneuvering is described in the on-going spiritual war. Note carefully the description how the Christian must control his mental preparedness if he is to achieve victory. “For though we walk in the flesh, we do not wage battle according to the flesh, for the weapons of our warfare are not of the flesh, but divinely powerful for the destruction of fortresses. We are destroying arguments and all arrogance raised against the knowledge of God, and we are taking every thought captive to the obedience of Christ.” (2 Corinthians 10:3-5).

Do not miss the point—the victory is won or lost in the mind! Of course, there has to be physical actions. But if the will to fight, obey and support is compromised, then the war is over! Inspiration tells us that this spiritual truth is amply illustrated in the physical world.

Now, with these thoughts in mind, please consider the current situation in the world. When this scamdemic surfaced, I dared suggest that this C-19 hysteria was a fear-mongering control. It had all the hallmarks of a controlled manipulative action. It was hysterical hype and not facts. It targeted our most vulnerable areas. It was bolstered by our naivete and absolute trust in “modern medicines.” Amazingly, it blinded the world and coerced populations to surrender basic freedoms, adopt behavior that was ludicrous, and compel the “mob mentality” to conform to illegal and unnatural “mandates.”

Note: I am not denying the reality of a COVID-19 virus and its fatality to compromised health (as any other health issue can cause problems to those in this group), but I am rejecting the “pandemic” hysteria that leads many to bow before the scarecrow in the cucumber field. Evil forces have taken a “molehill and made a mountain”! And, the world’s population, the majority of the medical profession and the politicians have swallowed this entire sting operation! Many are too personally invested to admit they have been duped.

At last articles are surfacing that highlight this devilish, universal psyop. An article that appeared first as an op-ed in the EPOCH TIMES was published in Zero Hedge. This article is, COVID Hysteria Could Destroy A Generation by Tyler Durden (Thursday, Sept 16, 2021 and was Authored by Rikki Schlott, op-ed via The Epoch Times). Schlott begins by noting, “Initial stay-at-home orders and widespread closures were implemented in a state of panic and uncertainty as COVID-19 quickly swept through the world. Without data, these measures were initially popularly accepted. Two weeks to stop the spread of a novel disease struck most citizens as more than reasonable.”

Note that the “beginning” rested upon an absolute dependency on modern medical advisors. These were trusted sources believed to have the “best interests” of the public in mind. Catastrophic charts forecasting hundreds and millions of deaths on a daily basis were given wide publicity. But, the two-weeks became months and now years. The hyped deaths became less than the annual flu season (in fact the annual flu season mysteriously disappeared). Facts surfaced that infections, hospitalizations and deaths were fluid numbers that were redefined. Many were silenced and persecuted for challenging the “science” of the scamdemic.

Schlott’s article observes, “With more data and information coming to light, many policymakers have failed to reinvestigate and reform their precautionary measures, thus increasingly acting both in conflict with science and in violation of liberties…This is especially true of school closures. As we accrued more and more studies and demographical data about how COVID-19 impacts children, the findings have largely been a blessing. The risk of COVID-19 to small children is astronomically low, and the risk of transmission between students and their teachers is hugely unlikely.”

As true with any given psyop, there are objectives to be realized. Once again Schlott’s article frames the objective as a totalitarian submission to the “authority.” The overall authority in this scamdemic is the State—all are told to do as the State “mandates.” The submission is validated by the absurdities accepted. Look at some of these:
• Don’t buy masks, they don’t work. Now they do work, and your life depends on them.
• The lab leak is an alt-right conspiracy theory. Now it’s likely fact.
• COVID transmits indoors. Let’s close the public parks.
• Mom and pop shops better board up. But Walmart is open.
• Businesses are closed. But not for the politicians who need a blowout or gourmet dinners with lobbyists.

Consider this observation: “Despite the contradictions, changing narrative, and blatant hypocrisy, many individuals have continued to toe the line. They dine for an hour at a dinner table in a crowded restaurant but put a mask on to walk out the door. They have chosen blind deference and performative virtue signaling over critical thinking and individual autonomy.”

Please observe the effectiveness of the psyop. As noted above, psyops targets a groups’
• will to fight,
• will to obey, or
• will to support.
Read Schlott’s article and appreciate the insight to this operation: https://www.zerohedge.com/medical/covid-hysteria-could-destroy-generation

A second article adds to the intriguing study and unsettling conclusions regarding the C-19 scamdemic. It is titled, “Mass Psychosis Is a Real Global Pandemic” and is authored by Dr. Joseph Mercola. This article has been “scrubbed” from the internet and is no longer available. The article analyzes the C-19 scamdemic and provides statistical documentation how the world has devolved into a mass psychosis. The following points summarized the analysis:

• Mass psychosis is defined as “an epidemic of madness” that occurs when a “large portion of society loses touch with reality and descends into delusions”
• We’re now in the middle of a mass psychosis, induced by relentless fearmongering coupled with data suppression and intimidation tactics
• In the U.K., psychiatric referrals for first-time psychotic episodes increased 75% between April 2019 and April 2021
• Rates of anxiety and depression worldwide increased dramatically in 2020. Estimates suggest the COVID pandemic resulted in an additional 76 million cases of anxiety and 53 million cases of major depressive disorder, over and above annual norms, with women and younger individuals being disproportionally affected
• Mental health referrals among children have doubled in the U.K. since the start of the pandemic; 16% of children between the ages of 5 and 16 were diagnosed with a mental disorder in 2020, compared to 10.8% in 2017

In this second article was a 21-minute video. The article references Carl Jung’s study and conclusions. During my time at UAH I had several courses that shed light on Jung’s psychology. Here is a good summary for the psychological aspects of this scamdemic. If you want to know what is going on with this scamdemic, listen to the presentation. This manipulation is not restricted to one nation but is worldwide.

If you do not agree with me, that is ok BUT I want your explanation as to what is behind this mess—it is NOT true “science”! This is a manipulative psyop seeking absolute control. And it is working. C-19 is not the global pandemic BUT the fostering of a mass psychosis IS the real pandemic.

This is where our American liberties are in 2021. The entire C-19 scamdemic continues to be a psyop of amazing intrigue. The end objective is for totalitarianism to be in the driver’s seat. The conflict is between the “Rulers” and the “Ruled.”

The operation was accepted by a population trusting in the “medical professionals.” That trust was misplaced. The trust was treated with scorn and used to further personal and political gains. Many politicians quickly jumped on-board this scamdemic hysteria and now they are reluctant to admit they, as well as the world’s population, have been duped by the flimflam sting operations. So, they look for a way to save face and consequently are adopting even great absurdities.

How much longer will we allow this to limit our freedoms? The absurdity is perhaps framed best in the story of a Rutgers student who was online only but was dismissed because he was not vaccinated! “A New Jersey student has said he is barred from taking classes at Rutgers University because he has not been vaccinated — even though he is only studying virtually from home.” Here is the link: https://nypost.com/2021/09/07/rutgers-bars-unvaccinated-student-from-attending-virtual-classes/.

If you want the truth regarding this scamdemic the I suggest you DO NOT “follow the science” but “follow the money”! The “science” is fake—the greater majority of medical professionals and politicians are more concerned about saving face than saving freedom!

“Truth is more powerful than the fiction peddled…” My query: Will you “surrender” or will you “stand”? Trusting the fiction is as good as a “scarecrow in a cucumber field”!