Bill Lockwood: Atheistic Professor in England Explains that a Brain-Affecting Parasite May Cause Support for Trump and Brexit 4 (1) 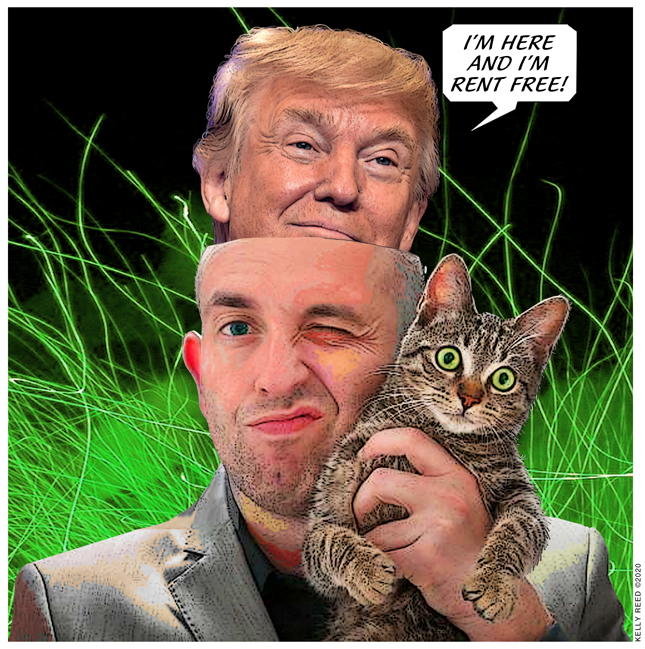 American Thinker published a column by Andrea Widburg (Nov. 22, 2020) which exposes a Cambridge University constituent college professor who presents a theory as to why Americans voted for Donald Trump and why Brits supported Brexit. A parasite has infected their brains, which causes severe mental disorders and behavioral problems.

The academic, Dr. Robert Asher, is an evolutionary zoologist at England’s Trinity Hall and a one-time contributor to Huffington Post. Asher suggests a parasite named Toxoplasma gondi is the cause of politically-incorrect behavior, a parasite which has long known to affect cats. Toxoplasmosis feels like a bad flu, which can cause seizures and lung problems. Behavioral problems as well result from Toxoplasma infection.

I would personally argue that one of the problems facing humanity is, is related to, um, you know, the influence of toxoplasma in, ah, cat owners, for example. One could argue why did Brexit happened or why did people in the United States elect Donald Trump? I suspect that it has very much to do with the mind-altering parasite called toxoplasma. And if you were interested in something like that, then taking a course like Evolutionary and Behavior would help you understand this truly nefarious problem. I don’t think anyone really realizes just how bad that particular problem is.

Crazy as the professor may sound, his assumptions are the inevitable result of the worldview known as Naturalism. The assumption of Naturalism, upon which other assumptions begin and end—namely the General Theory of Evolution as well as Atheism itself--holds that all explanations of life and even thinking must ultimately make reference to materialistic causes. As atheist of yesteryear, Woolsey Teller, stated, “the brain secretes thoughts as the liver does bile.”

Delos McKown, a one-time a professor of Philosophy at Auburn University, wrote that “the more we understand our brains by ‘chemicalizing’ their functions, the more the person is ‘biologized,’ …” Everything must be seen through the prism of “biology.”

Based upon this assumption, McKown went on to question free will. He went on to note regarding How the Brain Works, that “some neuroscientists are beginning to suspect that everything that makes people human is no more than an interaction of chemicals and electricity inside the labyrinthine folds of the brain.”

If these professors are correct in their analysis of the brain, what follows?

First, there is no such thing as rationality in the materialistic worldview. How did professor Asher come to his conclusions? His brain also—not simply a Trump supporter—is a result of physical and chemical functions alone. Perhaps he hit his head on the way to the office the day he conferenced the above ideas about toxoplasma. Perhaps he slept wrong the night before and his brain malfunctioned. This caused his thinking processes to alter and ascribe to conservatives a “parasite problem.” The chemical and electrical reactions in his brain are what caused this “conclusion.”

Better yet, perhaps he himself has been infected with the dreaded toxoplasma! Toxoplasma is a mind-altering parasite, we are told. How do we know he himself, and his conclusions about conservatives, is not the result of the dreaded cat parasite? Do you have cats at home, professor Asher?

Second, there is no such thing as free will, per the professors’ assumptions. If there is no free will, then there is no responsibility for thinking a certain way or voting for a specific cause or candidate. Not only so, but that would apply across the board. Professor Asher is no more responsible for his chemically-induced diagnosis of our brains than we are to have voted for Donald Trump. In reality, his “diagnosis” is not rational, nor could it be, given his assumptions. Isn’t it peculiar, that in denying God and the reality of rational thinking, atheistic professors actually cut off the ability to label their own conclusions as rational?

In the end, Professor Asher cuts the legs from underneath himself. If we know, for example, that a person argues for the free market SOLELY because he is afraid of losing his money, we tend to discredit his argument as due to irrational causes. This is because when we know that an argument proceeds from an irrational source, we discredit it. According to the professor, all thought comes from an irrational source. Thought has no power. It is the result of physical and chemical pressures in your cranium. The atoms therein simply arranged themselves so that you believe in God, for instance, or in voting for Donald Trump. But atoms inside Asher’s brain have done the same thing. Therefore, we cannot trust his thoughts any more than he can trust the thoughts of a Trump supporter.