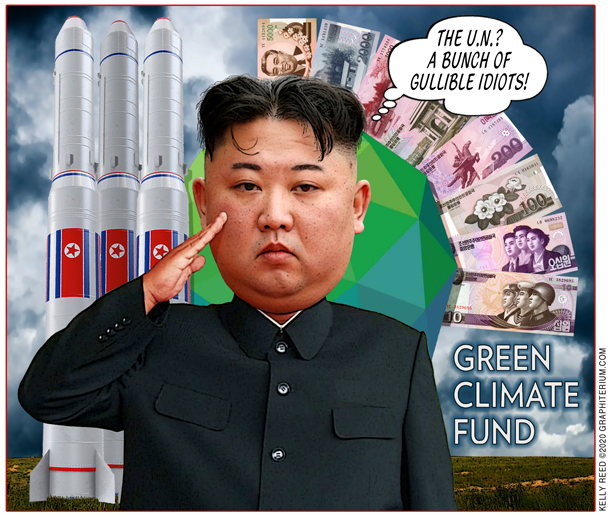 The initial funding will be almost a million dollars, but that round of funds is supposed to help the regime unlock even more going forward. The decision to fund North Korean oppression with Western tax dollars was made last month by the UN “Green Climate Fund” (GCF). The outfit, often ridiculed by critics as the Green Climate Slush Fund to subsidize Third World kleptocrats, is a wealth-transfer mechanism that claims it supports “developing countries” responding to “climate change.” “GCF helps developing countries limit or reduce their greenhouse gas (GHG) emissions and adapt to climate change,” it says online.

As part of that, the GCF approved a program known as “Readiness and Preparatory Support for Capacity Building of NDA (National Designated Authorities) and establishment of a National Strategy Framework for engagement with GCF in the DPRK.” The confusing and deliberately verbose title serves to conceal a simple agenda: Prop up the mass-murdering dictatorship with Western money, technology, and expertise under the guise of battling the mythical bogeyman known as “man-made global warming.”

According to the dictatorship’s request for funds, which has been published online by the GCF, activities under the project will involve developing a “package of training and capacity building exercises.” These training programs will help support the regime to “better coordinate and manage GCF and other climate finance,” and to “better engage with GCF and providers of climate finance.” In other words, a team of UN bureaucrats will be teaching Kim’s minions how to keep the “climate finance” loot flowing from Western taxpayers to his regime.

The lead ministry dealing with the program in Pyongyang will be the Ministry of Land and Environment Protection, according to the regime’s submission. The 43-page document, filed in the summer of 2019, explains that North Korea needs more help preparing to access “climate finance,” and so, the regime will be working with the UN to help “address” the “barriers” that currently exist to accessing even more “climate” loot. Other ministries that will receive support under the plan include those in charge of agriculture, electronic industry, urban management, fisheries, emergency management, and even “academic institutions.”

Leading the scheme on the UN side will be the scandal-plagued UN Food and Agriculture Organization (FAO). Last summer that controversial agency, one of the UN’s largest, was brought under control of the Communist Chinese dictatorship in Beijing, a very close ally — if not an outright puppet master — of the Kim regime enslaving the people of North Korea, when it managed to get its candidate elected to run the FAO by UN representatives. According to diplomatic sources, Beijing was able to secure enough votes for its candidate, Qu Dongyu, using a combination of bribery and threats. It was the fourth UN agency that fell under Communist Chinese control.

Before that, the UN FAO was run by Brazilian communist Jose Graziano, a close ally of disagraced Marxist leader Luiz Inacio “Lula” da Silva, the former Brazilian president who was jailed for looting the public to help fellow communists and his bank account. Like Qu, Graziano also used FAO funds to help out his communist buddies around the world. In fact, in 2017, Graziano, infamous for persecuting journalists who exposed him, helped the communist regime of Evo Morales in Bolivia secure access to “climate funding” via the “Green Climate Fund.” That scheme was worth $250 million.

In North Korea, the UN FAO, ensuring “diverse perspectives” by ensuring “equal representation of men and women,” promised not to ignore the current UN sanctions that have been slapped on the regime. However, the UN agency vowed to seek “sanctions exemptions” to facilitate the infusion of cash and know-how. Other UN agencies such as the World Intellectual Property Organization have come under fire for violating UN sanctions by transferring sensitive, dual-use technologies to the regime. But here, the FAO vowed to stay in “compliance.”

Explaining why the FAO was chosen to lead the project on the UN side, documents reveal that the Communist Party-controlled UN agency has spent decades providing “development assistance” to the North Korean regime. Ironically, one of the areas where FAO has been helping Pyongyang is “food security.” But literally millions of North Koreans have died from famine and hunger-related diseases since the mid-1990s — almost unique in the modern world— as the regime and its leader feasted at the expense of that nation’s enslaved population.

Incredibly, the regime attributes declining agricultural productivity not to communism and the inherent failures of central planning. Instead, the regime’s functionaries claimed that “climate change” was to blame. In the real world, though, agricultural yields are increasing worldwide, which is to be expected. Obviously, with CO2 (plant food) concentrations rising and the planet getting slightly warmer, largely as a result of natural causes, crop yields should be growing, not contracting. But not in North Korea, apparently.

Establishment-minded analysts trying to put a positive spin on all this sounded almost too ludicrous to be believed. Columnist John Burton, formerly with the establishment Financial Times, claimed that “the problems North North Korea is experiencing due to climate change are also due to the fact that it sits next to much bigger producers of greenhouse gas emissions,” namely, Communist China.

But the only example of these problems cited was “yellow dust” — basically soil dust mixed with Chinese pollution, which was made worse not by CO2 emissions, but by communists in Uzbekistan and Kazakhstan drying up the Aral Sea. Records of “yellow dust” go back thousands of years.

Almost incredibly, Burton goes on to celebrate the unimaginable poverty caused by communism in North Korea. “Paradoxically, North Korea’s economic backwardness is another advantage,” claimed Burton in the Korea Times column pushing for Trump to end some sanctions as part of a “Green New Deal” for North Korea. “It does not yet have an extensive fossil fuel-based infrastructure. That makes it easier to turn to renewables to power future growth if the planning is right.” Yes, the fact that North Koreans are literally starving and living in stone-age conditions is great because, if Kim plans right, he can use “renewables” if he ever decides to allow his miserable slaves to access a little electricity.

Members of the Green Climate Fund’s board of directors represent a variety of governments, including more than a few brutal dictatorships. Among the regimes represented are oil-rich Islamic theocracies such as the regimes ruling Iran and Saudi Arabia, along with more than a few socialist governments from Europe and Latin America. Analysts have described it as a “slush fund” to bribe Third World regimes into getting on board with the UN’s global agenda — more “global governance,” more power for the UN, global taxes, and global wealth redistribution. Obama illegally funneled billions of American dollars to the GCF, in flagrant violation of federal law.

Of course, this is hardly the first time the UN has funneled American money to Pyongyang, helping to prop up one of the most brutal and totalitarian regimes in all of human history. The UN Development Program (UNDP), for instance, helped build the Pyongyang Semiconductor Factory in the 1980s. According to both U.S. and South Korean government sources cited by the Nuclear Threat Initiative in Washington, D.C., the regime uses that plant to produce electronic components for missiles, many of which are aimed at U.S. forces and American allies.

Under the guise of fighting “global warming,” the UN has been getting away with all sorts of criminal activities — extorting Western taxpayers, expanding its power, bullying industry, further infringements on liberty and free markets, brainwashing children with “climate education,” and so much more. Once again, allowing communists running UN agencies to transfer Western wealth to their mass-murdering allies can be added to the list. For the sake of Americans and Koreans, it is time for Congress and President Trump to step in and end these schemes now.