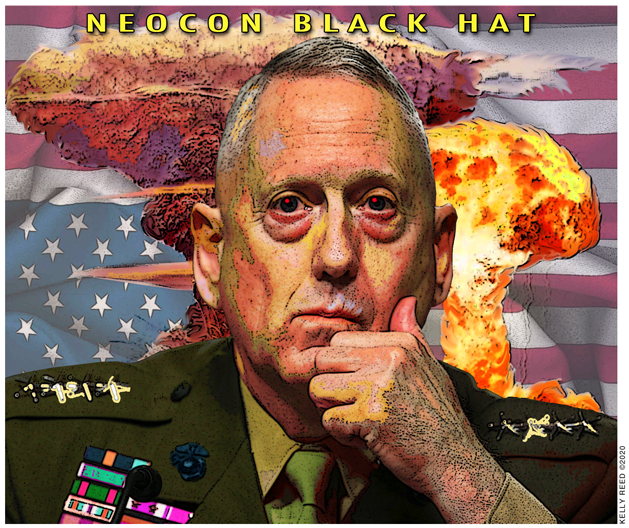 Just what country is the top priority of the military and foreign policy establishment?

Former Defense Secretary James Mattis, who left the Trump administration amid mutual acrimony, has declared, in a Foreign Affairs op-ed cowritten with establishment foreign policy wonk Kori Schake, that he hopes a Biden administration won’t put America first. He didn’t say which country he thought a president of the United States should put first instead. But even so, it was one of the strangest statements a member of the U.S. government has ever made, and the bland reception it received is an indication of how deep the corruption is at the highest levels.

If Donald Trump doesn’t take the Oath of Office on January 20, 2021, one principal but little-noted reason for this may be that he crossed one of the most powerful and least accountable forces in the nation: the military-industrial complex. As Trump said last September, “the top people in the Pentagon…want to do nothing but fight wars so that all of those wonderful companies that make the bombs and make the planes and make everything else stay happy. But we’re getting out of the endless wars, you know how we’re doing.”

Mattis and Schake revealed the self-serving nature of these wars, and how they are actively against the genuine national interest, when they wrote: “In January, when President Joe Biden and his national security team begin to reevaluate U.S. foreign policy, we hope they will quickly revise the national security strategy to eliminate ‘America first’ from its contents, restoring in its place the commitment to cooperative security that has served the United States so well for decades.”

This was so important, they asserted, because “in practice, ‘America first’ has meant ‘America alone.’ That has damaged the country’s ability to address problems before they reach U.S. territory and has thus compounded the danger emergent threats pose.”

That’s ridiculous. Trump’s travel bans, which Biden has pledged to repeal on his first day in office, are designed to prevent problems from reaching U.S. territory. Biden’s repeal of them will only make Americans more vulnerable. Also, Trump’s America First policy was not “America alone” by any means: the U.S. was instrumental in concluding peace deals between Israel and three of its Arab Muslim neighbors, deals that John Kerry, who will soon be back in a position of power, assured us back in 2016 would be absolutely impossible. Trump has also demanded more responsibility from our allies, asking them to pay more for their own defense.

The only way in which Trump’s America First policy meant “America alone” was insofar as it broke from the internationalist arrangements that have been in place since the end of World War II, to which Mattis and Schake refer as “the commitment to cooperative security that has served the United States so well for decades.”

But if a “commitment to cooperative security” doesn’t involve being able to put one’s national interests first, how is it good for the people of that nation? That question doesn’t apply just to America.

In reality, the president’s primary job is clear from the oath of office that every president recites in order to assume office, and it isn’t to provide “cooperative security” for other countries in the world, or free health care for illegal aliens, or to make sure that Somalia or Afghanistan isn’t riven by civil war, or to make sure America is “diverse.” It is simply this: “I do solemnly swear (or affirm) that I will faithfully execute the Office of President of the United States, and will to the best of my ability, preserve, protect and defend the Constitution of the United States.”

Or, to put it even more simply, as Rating America’s Presidents: An America-First Look at Who Is Best, Who Is Overrated, and Who Was An Absolute Disaster explains, the primary job of the president of the United States is to put America first.

It is in large part because they reject that principle that the elites have hated Trump with such burning intensity, and have worked so hard to get him out of office. Someone has to pay for that “cooperative security,” and someone has to be paid, and that means that Trump was threatening some extremely wealthy and powerful interests.

The internationalist elite has reasserted its hegemony and beaten back a serious challenge. And it is not a good sign that in spiking the football after that victory, Mattis makes it abundantly clear that “cooperating with like-minded nations” means putting their interests before our own. No responsible national leader should do that, but of course soon, if the Left’s quest for open borders is successful, there won’t be any more responsible national leaders, and even nations themselves will be a thing of the past.

Robert Spencer is the director of Jihad Watch and a Shillman Fellow at the David Horowitz Freedom Center. He is author of 21 books, including the New York Times bestsellers The Politically Incorrect Guide to Islam (and the Crusades) and The Truth About Muhammad. His latest book is Rating America’s Presidents: An America-First Look at Who Is Best, Who Is Overrated, and Who Was An Absolute Disaster. Follow him on Twitter here. Like him on Facebook here.