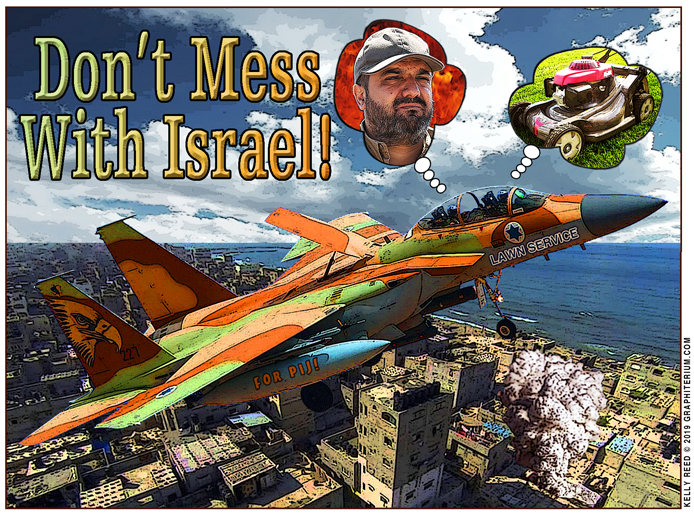 In Gaza, on November 11, having endured many attacks on its civilians by Palestinian Islamic Jihad, Israel struck at the terror group with pinpoint accuracy, firing a missile at a particular room on the third floor of a residential building, which turned out to be the very bedroom of the Palestinian Islamic Jihad commander in northern Gaza, Baha Abu al-Ata, killing only him and his wife. Confirming his death, a PIJ spokesman said he was just about to undertake “a heroic jihadist action.”

Israeli Prime Minister Benjamin Netanyahu called Abu al-Ata an “arch-terrorist” and said he was “the main instigator of terrorism from the Gaza Strip. He initiated, planned and carried out many terrorist attacks. He fired hundreds of rockets at communities in the area adjacent to the Gaza Strip, whose suffering we have seen,” he told a news conference in Tel Aviv. “He was in the midst of planning additional attacks in the immediate short term. He was a ticking bomb.”

The PIJ is the second-largest terrorist group in Gaza, and also has offices abroad  in Damascus, Tehran, and Khartoum. It is even more extreme than its rival Hamas, in that – unlike Hamas — it refuses even to consider a ceasefire, and it has recently been firing hundreds of rockets into southern Israel, always into civilian areas, in its determination to prevent a shaky ceasefire between Hamas and Israel from taking hold. Israel has previously held Hamas accountable for attacks by the PIJ, and would attack Hamas targets in retaliation for PIJ rocket attacks on Israeli towns and cities. The idea was to inflict so much pain on Hamas that it would then target PIJ in Gaza itself, to prevent its attacking Israel. But now, with the killing of Baba Anu al-Ata, Israel appears to have concluded that Hamas has been not unwilling but, rather, unable to halt PIJ attacks on Israel, so the IDF will have to do the job itself. The Chief of Staff of the Israel Defense Forces (IDF), Lt Gen Aviv Kochavi, said that Abu al-Ata had undermined recent efforts to broker a ceasefire between Israel and Hamas, which runs Gaza and is considered a rival to PIJ.

An hour after the Israelis announced the attack on Abu al-Ata in northern Gaza, an Israeli plane fired two rockets at the house of Akram al-Ajouri, a senior member of the terror group PIJ, in the Mezzeh area of Damascus. Al-Ajouri managed to survive, but his son and Ajouri’s bodyguard were killed.

What do these attacks signify? First, that Israel wants to do its utmost to ensure that no innocents are harmed. In both cases, the rockets struck with pinpoint accuracy. In Gaza, not only did the IDF manage to limit the attack to Abu al-Ata’s apartment on the third floor, but, with even greater accuracy, to the very bedroom where he and his wife were sleeping. In Damascus, a similar surgical strike on the home of Al-Ajouri killed only his son and his bodyguard. Many hours later, the Syrians claimed that Al-Ajouri’s granddaughter had also been killed; it’s unclear if this is true, or if it was fabricated in an attempt to elicit more anger against Israel.

Compare these Israeli strikes to how the PIJ struck back. In just the six hours after the killing of Abu al-Ata, PIJ fired more than 170 rockets into civilian areas of Israel. Workplaces and schools were shut down as far north as Tel Aviv. There was no attempt by PIJ to hit a particular target, no “pinpoint accuracy” to these attacks; every Israeli in southern and central Israel was a potential target, including those in the country’s hub, Tel Aviv. Half the country closed down, including schools and workplaces from Tel Aviv south; with sirens intermittently sounding, and people taking cover on the streets or in one of the many bomb shelters that Israelis have built everywhere in their permanently imperiled country

Israel has now retaliated, in turn, for those PIJ rocket attacks. It did not do so right away, holding its fire for six hours, possibly in the hope that after the targeted killings, and having vented its anger with its volley of rockets, the PIJ might rethink its strategy. But it was not to be: and so, with 160 rockets having been fired at Israel, the IAF finally struck back, only at strictly military targets of the PIJ. The IAF hit arms warehouses, a training center for Islamic Jihad’s naval force, a shaft of a PIJ terror tunnel in northern Gaza, and a digging site of another PIJ terror tunnel in the central Strip. Only five people have been reported killed in those attacks, all of them PIJ terrorists. Here, again, in Gaza, the IAF has shown itself to be exceedingly accurate, with no civilian deaths among the Palestinians reported so far.

Israel, meanwhile, has also been careful not to hit a single target belonging to Hamas. Israelis have rethought their previous strategy of holding Hamas responsible for attacks by Palestinian Islamic Jihad, and attacking it after enduring attacks by PIJ. Israeli commanders have become convinced that Hamas is trying, but not succeeding, in preventing PIJ from launching its rockets. So Israel briefly decided to return – but has made clear it is doing so only temporarily — to its former policy of “targeted assassinations,” that it used to employ with such effect against Hamas. The IDF is trying to deal forcefully and quickly with the Palestinian Islamic Jihad, by cutting off the “head of the snake” – that is, killing its military commander in Gaza, Baha Abu al-Ata, and, in Damascus, the head of its political wing, Akram Al-Ajouri. It wants to weaken Palestinian Jihad, perhaps enough to encourage Hamas to finish the job the IAF has begun, and to return to trying to keep alive the tentative ceasefire that Egypt has been brokering between Israel and Hamas.

As the battle goes on, and both sides have already been “urged to exercise restraint” by the U.N., note that “restraint” is exactly what Israel has always been exercising, in these surgical strikes against PIJ leaders and military targets. It is the PIJ that has never exercised “restraint” in its attacks on Israelis, consistently shooting its rockets into Israeli civilian areas. If it has not caused more civilian casualties, it’s not for want of trying.

The remaining leadership of PIJ remains defiant, and issued a statement promising that “Our inevitable retaliation will rock the Zionist entity.” So far that “inevitable retaliation” has not led to any Israeli deaths, but only to fewer than a dozen wounded. This low number testifies to the efficacy of the Iron Dome anti-missile defense system, the country’s excellent warning system, and the shelters that are found  everywhere in Israel.

Hamas, the Palestinian organization that administers the Gaza Strip, said Israel “bears full responsibility for all consequences of this escalation,” and promised Abu al-Ata’s death “will not go unpunished.” This is the minimum that could be expected from Hamas, which though secretly pleased at the damage done to its rival, must pretend to be outraged by Israel’s attacks. It is noticeable that Hamas did not fire any retaliatory rockets itself, nor did it state that it would participate in “punishing” Israel. If Abu al-Ata’s death “will not go unpunished,” apparently Hamas will not be among those doing the punishing. Hamas could have said that “we will help punish Israel for its murder of Abu al-Ata,” but did not. That’s a significant public breach between Hamas and PIJ. How long Hamas will wait, until itself taking on the much-weakened PIJ, in order to assure itself that the ceasefire with Israel will hold, is anyone’s guess. The Israelis hope it is soon. They would themselves re-enter Gaza, to crush all the terrorists, what they call “mowing the lawn,” only most reluctantly. Hamas cannot afford to behave like PIJ, oblivious to the consequences of its acts, and willing to endlessly attack Israel even if the IDF’s retaliation is always more punishing than anything the PIJ can inflict. For Hamas is now more than a terrorist group; it bears all the responsibilities of rule in Gaza. And that includes trying to maintain the ceasefire with Israel, brokered by Egypt, for as long as it serves its interests.

Why do Israelis call these actions taken against the terrorists “mowing the lawn”? It’s because they know it is only a temporary solution to a permanent problem. The terrorists may be cut down, but will always reappear, like a lawn that regrows after being mowed. The Jihad, the Israelis know, is permanent. It’s been going on, somewhere in the world, for the past 1,400 years. If only the people in the chanceries of the West, so quick to round on Israel for daring to defend itself, could grasp that simple fact.

Hugh Fitzgerald is a student of history and literature, primarily of America and Europe. He admires Jacques Barzun, J. D. Salinger, and Alan Bennett, reads dictionaries for profit and pleasure, and finds particularly appealing the words “recompense,” “quondam,” “magari,” and “degringolade.”

By far the best way to reach Hughun is through the offices at Jihad Watch. Fitzgerald has an email account, the address of which is hughfitz123@msn.com.