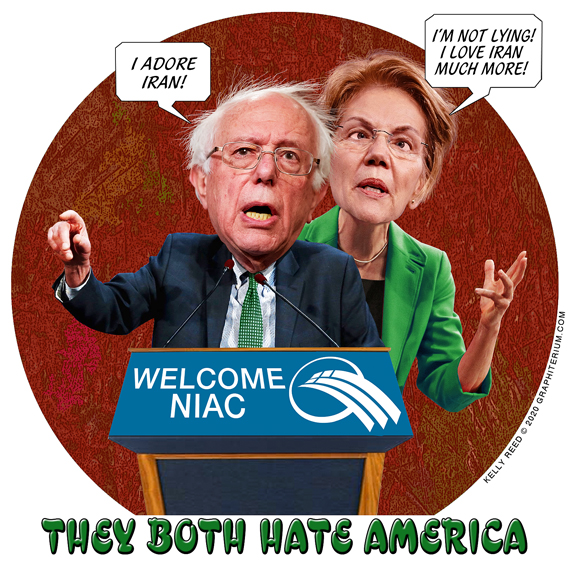 Which side are they on? The answer to that is clear.

Democratic presidential contenders Sens. Elizabeth Warren (D., Mass.) and Bernie Sanders (I., Vt.) are slated to host a conference call with an Iranian-American advocacy group that has been accused of lobbying on Tehran’s behalf.

The Democratic candidates’ willingness to engage with NIAC—a group that aggressively pushed the accord and has strongly advocated against U.S. sanctions on the Islamic Republic—reflects their desire to see America reenter the nuclear deal, which released up to $150 billion in cash to the regime. Much of that money has gone to fund Iran’s regional terror operations, including recent attacks on American personnel stationed in the region.

Parsi lobbied Congress against sanctions on Iran in 2013 and met with Obama administration officials at the White House dozens of times leading up to the nuclear deal’s signing in 2015. Multiple U.S. officials and senior congressional sources informed the Washington Free Beacon that Parsi helped the White House craft its messaging as it tried to sell the nuclear deal to the public. The NIAC chief met with Rhodes, among other top officials, during multiple visits throughout the Obama era.

Rhodes delivered a keynote speech at the 2016 NIAC leadership conference.

NIAC was ordered to pay more than $180,000 in 2013 to the legal defense fund of Hassan Daioleslam, an Iranian-American writer, after a failed defamation lawsuit. Daioleslam had accused NIAC of failing to disclose its clandestine lobbying efforts to undo sanctions on Tehran, the Free Beacon previously reported. The U.S. District Court for the District of Columbia said Parsi’s work was “not inconsistent with the idea that he was first and foremost an advocate for the regime.”