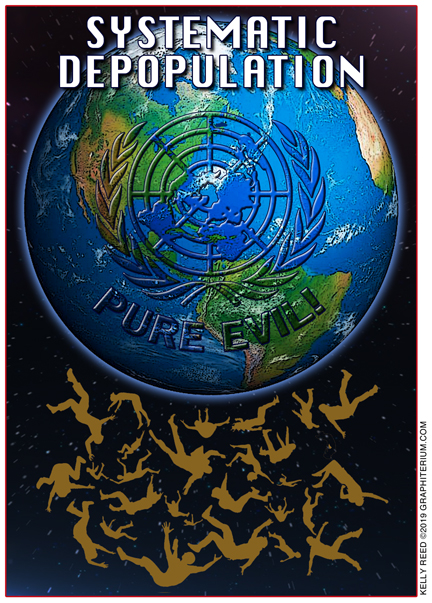 MADRID — To deal with the alleged “climate emergency,” reducing the number of people on the planet is high on the agenda among activists and speakers at the United Nations COP25 “climate” summit. The growing extremism and even paranoia among population-control advocates, who worry that more people will release more CO2 into the atmosphere, is reaching deafening levels. But the establishment media is largely keeping silent.

The advocates of population control and population reduction are divided, though, on what particular peoples and groups should be targeted most heavily. One key speaker at the UN summit said “white men” and especially Americans and Swedes must stop having babies. An exhibitor promoting “sustainable development,” meanwhile, argued that Africans and Asians ought to be the key target of the depopulation. Others think all of the above.

What means should be used was also a subject of debate. Some activists and speakers promoted propaganda, indoctrination, tax-funded contraception, abortion, ubiquitous birth-control availability, and even coercive population-reduction measures. Others say even more drastic means are needed to deal with the “emergency.” One UN speaker went even further earlier this year, suggesting that actually “killing” people could be on the table.

A major speaker at the UN summit, Oscar-winning director Michael Wadleigh (shown above) of “Woodstock” fame, minced no words in an interview with The New American. “Don’t have children — and I’m looking at you, white man,” he said on camera, speaking in a deep voice, echoing comments he made in high-profile official speeches at the summit.

The reason why it is so important to reduce the population of Europeans and their descendants is because their nations are more developed and they consume more resources, he said. Even Scandinavia and Sweden, which have a “clean” image, are destroying the planet, Wadleigh continued, warning that average Swedes consume 40 times more than average Tanzanians. Even socialist presidential candidate Bernie Sanders is not radical enough on these issues, he said.

“If you were into population control or population reduction, which is good idea worldwide, you should go to Sweden, because if your efforts resulted in one less baby in Sweden, that would be equal to your efforts to go to Africa and reduce populations by 46 percent, sorry, by 46 people in Africa,” said the director turned population-control activist, who spoke just a few hours prior on the same stage as former U.S. Secretary of State John Kerry.

Wadleigh, who has one child and works closely with the UN, crunched the numbers and became convinced. “So where does it make sense to start your population reduction efforts? Start with the people who are the highest per capita emitters, if your goal is to reduce climate change and unsustainable development,” he explained, without noting that the environment in more developed countries such as Sweden, America, Switzerland, Japan, and so on is generally far cleaner than in Third World nations.

Prominent population-control advocates such as neo-Malthusian Paul Erlich of “Population Bomb” fame and Obama’s “Science Czar” John Holdren have offered radical ideas on this subject. In their 1977 book EcoScience, the duo — who at the time were peddling “global cooling” alarmism — discussed mandatory abortions and adding “sterilizing agents” to the water supply as potential tools for bringing population levels under control.

When asked if those ideas might be going too far, Wadleigh smiled and responded: “You haven’t heard me talk yet!” The ultra-left-wing UN speaker, a fan of communism, did not elaborate on how much further he would be willing to go to reduce human numbers, before going on to speak about what he sees as over-consumption.

In one of his UN talks from one of the most prominent stages in the entire convention, Wadleigh emphasized the need for government coercion to achieve his vision. One of his main messages was the need to drastically reduce consumption. “We can no longer do this voluntarily,” said Wadleigh, pining for a global government that he said did not yet exist. “Make it a law, not a voluntary action.”

A few hours later, former Senator Kerry took the same stage to bad-mouth America and lie about all sorts of things. Among other “climate whoppers,” he claimed that solar energy was now cheaper than traditional forms of energy “by every metric.” If that were true, everybody would be using it, of course.

Rather than targeting Western nations — virtually all of which have birth rates at less than replacement levels — others in Madrid for the COP25 proposed targeting Third World populations. Alejandro Moran Rodriguez, for example, a UN volunteer at the COP25, was manning a booth promoting the UN’s controversial “Sustainable Development Goals.” He told Rebel News that countries in Africa and in Asia should be high on the list for population-control, because they do not have “that culture.” And so, governments must “manage their population,” he said, calling for UN enforcement of contraception.

Another UN speaker also veered into the highly controversial and sensitive area. Self-described “Eco-Social Strategist” Stuart Scott with the group Scientists Warning, who gave almost a dozen talks and press conferences throughout COP25, spoke on topics such as “Too Many Of Us.” “It is undeniable that humanity’s footprint is the number of us times the consumption,” he said, adding that concerns over upsetting religious people were holding back necessary discussions on how to limit the number of human beings on the planet. The Christian Bible, for example, calls on people to “be fruitful and multiply.”

But Scott does not think that is a good idea at all. Pointing to Project Drawdown, Scott suggested that “educating females” and making tax-funded “family planning” available to them would be among the top three ways to reduce CO2 emissions if combined into one package. “The topic [of population control] needs to be part of the negotiations,” he argued. “We are making tiny progress…. Our request — it should be our demand, but I’m not the one making the demand — is that the UN put it on the agenda.”

Asked about whether the UN Population Fund (UNFPA), the UN agency tasked with population control, was doing an adequate job, he responded: “I can’t comment on that because I’m not well enough informed.” According to congressional testimony, the UNFPA and Planned Parenthood have worked with Beijing on perpetrating forced abortions.

Of course, Communist China’s coercive population-control regime literally includes kidnapping pregnant women and killing their pre-born children. When asked if the regime had gone too far in its efforts, Scott did not say. “Even though China relaxed its one-child policy, it’s birth rate has not gone up the way they thought it would,” he said, hopefully, suggesting that fears about climate change were causing women not to have children.

While controversial, Scott’s efforts have been endorsed by everyone from prominent global-warming scientist James Hansen and neo-Malthusian Ehrlich to organizations such as 350.org, Friends of the Earth, and Citizens Climate Lobby, which has former Secretary of Treasury and State George P. Schultz on its advisory board. Erlich, one of Scott’s supporters, has been one of the most vocal advocates of reducing human numbers. Scott even spoke on a panel with Hansen during COP25.

This zealotry for reducing the number of people on the planet has become a common theme at UN gatherings. Earlier this year, at the 68th UN Civil Society Conference in Salt Lake City, Utah, one speaker went further than most would dare to in public. After speaking on a panel with UN Assistant Secretary-General Satya Tripathi, Global Initiative for Food Security and Ecosystem Preservation (GIFSEP) Executive Director David Michael Terungwa dropped a bombshell. “We can’t kill them all,” he said, twice, laughing.

Before that, at the COP24 in Poland last year, Al Gore trumpeted the theme. Among the solutions to the supposed “climate crisis,” Gore touted more and stricter population-control policies by government. Perhaps oblivious to the ghoulishness of his words, Gore praised the population-control regime operated by the government of India, which has been widely condemned as abusive and coercive. Showing a graph of China’s population, he also celebrated the policies of the mass-murdering dictatorship in Communist China.

However, showing a graph of Africa’s population, Gore suggested that Africans were still having far too many babies for planet Earth to sustain in the face of supposed “climate” change. Despite lip-service to the pope and Catholicism, Gore demanded, among other tactics, that contraception be made “ubiquitously available” all over the world. The goal: Help reduce the number of children, and especially Africans.

The New American asked Democrat presidential candidate and former New York City Mayor Michael Bloomberg, known for his desire to have Big Government disarm you and regulate everything from Big Gulps to salt content in food, for his thoughts on the population-control subject. “Thank you, have a nice day,” he responded with a strange grin. His handlers promptly rushed in — “he’s not taking interviews right now” — before his armed security, looking grumpy, whisked him away.

Children are already being bombarded by UN propaganda at school and in official UN publications. The goal: convincing students that having babies is bad for the planet. The the 1994 UN-produced book Rescue Mission: Planet Earth : A Children’s Edition of Agenda 21, the UN’s self-styled “education” agency teaches children that “the planet groans every time it registers another birth.” And that is just the start of what critics say is the anti-human, anti-Christian, anti-freedom propaganda that has been peddled by the UN to children for decades now.

During the recent debate on a whether or not to declare a “climate emergency,” German Members of the European so-called Parliament expressed deep unease over the declaration. The reason is that the German term for emergency, der Notstand, is associated with a Nazi law adopted by Adolf Hitler’s National Socialist party to consolidate power.

The UN summit, led by international socialists such as Antonio Guterres, appears to be hoping for vast new powers to deal with this supposed “climate emergency.” And at the top of the list will be reducing the number of people on the planet, by any means that they consider necessary.