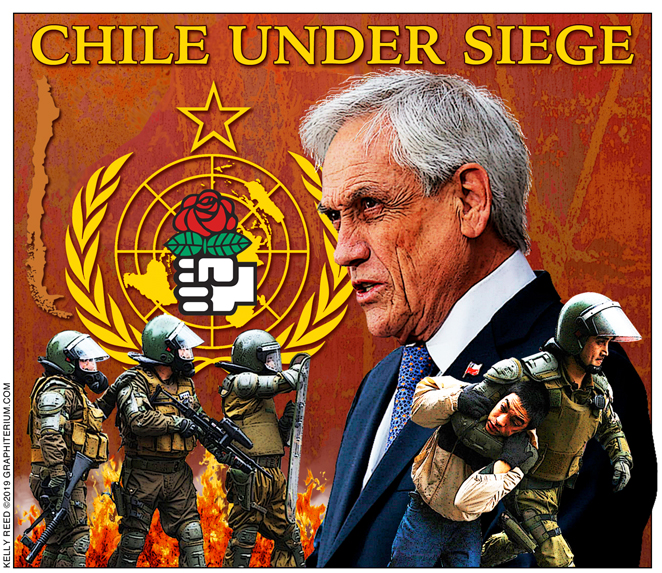 The United Nations and the Socialist International are waging war against Chile and its conservative president, Sebastián Piñera. Since mid-October, Chile’s capital, Santiago, and other cities across the country have been wracked by violent riots, with dozens of people killed, thousands injured (including hundreds of police and military personnel), thousands arrested, and an enormous amount of destruction of public infrastructure and private property, including train stations, businesses, shops, and supermarkets.

The Piñera government declared a state of emergency and imposed curfews. President Piñera faces a National Congress that is stacked against him, as well as a hostile media, and leftist-controlled universities that serve as hotbeds for revolution.

The United Nations high commissioner for human rights, Michelle Bachelet, has responded to the turmoil by sending a team of UN investigators to Chile to examine allegations of human rights abuse by the Chilean government. This move by the UN should have caused suspicion from the get-go. Why? Well, for one thing, Michelle Bachelet is herself a former president of Chile (two terms, 2006-2010 and 2014-2018) and a virulent opponent of President Piñera. That alone should lead any reasonable observer to suspect, at the very least, that her UN “investigation” is likely to be politically motivated.

However, it goes much deeper than that. Bachelet, a hardcore Marxist, is an ardent admirer of the late communist dictator Fidel Castro, and, as one of her last acts as president of Chile, made a pilgrimage to Cuba to praise Fidel and meet with his designated successor and brother, Raúl Castro, the current communist dictator of Cuba. She is also a supporter of the Marxist regimes in Nicaragua and Venezuela.

Another SI/UN alum is former Chilean President Ricardo Lagos, a former member of Chile’s Socialist Party and one of the Chileans often quoted in recent stories undermining President Piñera. He is also one of the few SI members named to the “Committee of Twelve Distinguished Members of the Socialist International.” In 2007, he was named as a UN special envoy on climate change, along with former SI vice president and UN functionary Gro Harlem Brundtland, the former prime minister of Norway.

Bachelet, Guterres, Lagos, Brundtland, and other SI/UN comrades are welcomed as honored guests at the CFR and other globalist gatherings. Bachelet and Lagos are both members of the elite Club of Madrid, as well as Inter-American Dialogue, where both have served as co-chairs.

The cause of Chile’s current “unrest,” according to the lords of the Fake News Media, was the government’s subway fare hike of 30 pesos, the equivalent of four U.S. cents. Anger over the fare increases, goes the standard line from media commentators, caused spontaneous, “student-led” flash mobs of hundreds of youths to jump the Metro turnstiles in protest, which then escalated to “youth-led” mobs setting buses and Metro stations on fire and looting stores, and then escalated still further and broadened into massive protests, supposedly motivated by “income inequality.”

This is the story we get from the New York Times, Washington Post, Associated Press, CNN, PBS, and the rest of the Deep State media cartel. Most of these “news” reports take their cues on the issue from so-called experts at the Council on Foreign Relations, the Council of the Americas, Inter-American Dialogue, and similar globalist propaganda founts that posture as objective think tanks.

According to Amelia Cheatham, a “Special Assistant” at the Council on Foreign Relations (CFR), “The turmoil began on October 18 with student-led protests over a metro fare increase.” Her CFR blog post entitled “What’s Behind the Chile Protests?” states that “Political unrest is sweeping Chile, as impatience with inequality grows in what has been one of Latin America’s most prosperous and stable countries.”

President Piñera and other Latin American leaders paint a different picture. “We are at war against a powerful enemy, who is willing to use violence without any limits,” Piñera declared in a late-night televised statement on October 29. “We are very aware that [the perpetrators of riots] have a degree of organization, logistics, typical of a criminal organization,” he said. According to news reports from Chile, Cuban and Venezuelan nationals were arrested as instigators of the rioting. And Chile is not alone in this regard.

On October 22, Argentina’s National Security Council met to consider the wave of violent protest that is sweeping across Latin America. Following the meeting, Argentine Foreign Minister Jorge Faurie pointed to Cuba and the Marxist dictatorship of Nicolás Maduro in Venezuela as the source of the orchestrated upheavals. “They intend to intervene in the political, institutional and social lives of our countries, threatening us like a Bolivarian hurricane that brings in its winds hunger, poverty, dictatorship, the loss of liberty and a prison sentence,” Faurie charged. “Bolivarian” refers to the political philosophy of Venezuela’s founding father, Simón Bolívar, which has been expropriated and hybridized by Hugo Chávez, Nicolás Maduro, and others of the communist-Left to advance their socialist agendas.