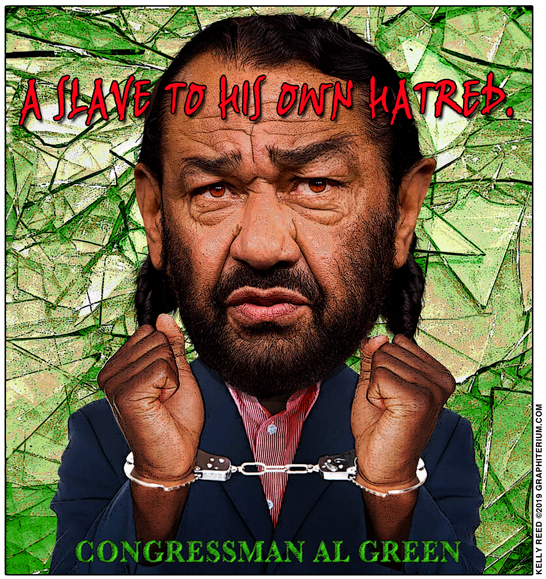 Ellie Bufkin of the Washington Examiner, wrote the following. “Democratic Texas Rep. Al Green claimed that President Trump’s impeachment was necessary to deal with the ‘original’ sin of slavery.

“During a Saturday appearance on MSNBC, the congressman cited an interest in acting on behalf of people of color. ‘I do believe, ma’am, that we have to deal with the original sin,’ Green said to host Alex Witt. ‘We have to deal with slavery. Slavery was the thing that put all of what President Trump has done lately into motion. It’s [the] insidious scion of racism. The president has played on racism, and he’s used that as a weapon to galvanize a base of support to mobilize people.’”

Let’s step back a moment.

The biblical scholar R.C. Foster observed over a hundred years ago that the rejection of Jesus by his home town of Nazareth (Luke 4) was in part due to the “most common and worst of crimes”—ingratitude. “It is often true that the more that is done for unworthy people, the less they appreciate it and the more they presume upon the generosity of others and grow in the false grandeur of their own conceit.” That this is self-evidently true is seen in the sad reality now in America. Ingratitude.

Prior to the creation of our welfare state in America, charity was practiced by individuals, churches and private organizations. This was the formula of the Founding Fathers. So successful was it that there is no record of people dying on the streets because of lack of food, shelter or medical assistance. Americans were the most generous people on the earth. So thought Alexis de Tocqueville when visiting our country from France in 1831 and 1832.

Enter the welfare state of the federal government. It has helped create the opposite of its stated goal of alleviating the poor. Not only has poverty continued to rise in America, but the sense of “entitlement” followed by the “worst of crimes”—ingratitude—has become commonplace. This has now morphed into a boiling hatred for whites in many minority communities that one can hear, see, and feel.

See the statistics on recipients of the state-sponsored welfare state. According to the U.S. Census Bureau “approximately 21.3 percent of people in the United States participated in major means-tested government assistance programs each month in 2012.” Participation rates for the black population is at 41.6 percent; followed by Hispanics at 36.4 percent; then Asians or Pacific Islanders at 17.8 percent; lastly, by non-Hispanic whites at 13.2 percent. Stating the obvious, the Bureau concluded “blacks were more likely to participate in government assistance programs in an average month.”

Added to overt financial assistance from the public trough, minority communities have also been the favored recipients of government policies such as affirmative action which has been touted as necessary to fight the enduring effects of white racism. Our entire culture is saturated with affirmative action practices, from educational institutions, medical schools, law schools, even the military itself. But instead of alleviating racial animosity, the only enduring lesson that is being ingrained is hatred for a white America that supposedly is racist.

Back to Al Green. Hatred simply seethes in America. The comment by Democratic Texas lawmaker Al Green, who claims that America needs to deal with racism of the past by impeaching President Trump, is a perfect example. To Green, everything that occurs is colored in racial tones. White America can elect a Barack Obama, can pay millions of dollars to black sports and entertainment hero’s; can acquiesce to affirmative action programs that favor people of color in all segments of society—yet nothing is enough. Atonement is never found. This is the way hate works. Hate is a leviathan with an insatiable appetite. Always hungry for more, but never satisfied. Al Green is afflicted with it, and it has become so pervasive that Green feels comfortable airing his hatred on national television.

The “original sin” of which Al Green speaks is ingratitude. His own. His ingratitude for being a legislative leader in the greatest country that has ever existed. He has allowed the ingratitude in his soul to hard-boil into hatred. Al Green hasn’t ever been a slave; nor his father, and I dare say even his grandfather. He knows no slave holders in America, nor the sons of slave holders. The only people that are slaves are the middle-class taxpayers who support his gigantic welfare state. But this is not enough.

Just as with the election of Barack Obama, many whites supposed that racial animosity would subside, but they were mistaken. It metastasized. Hatred knows no bounds. Even if Donald Trump is successfully impeached and removed from office, which would be a travesty in American justice, Al Green’s hatred will only increase.