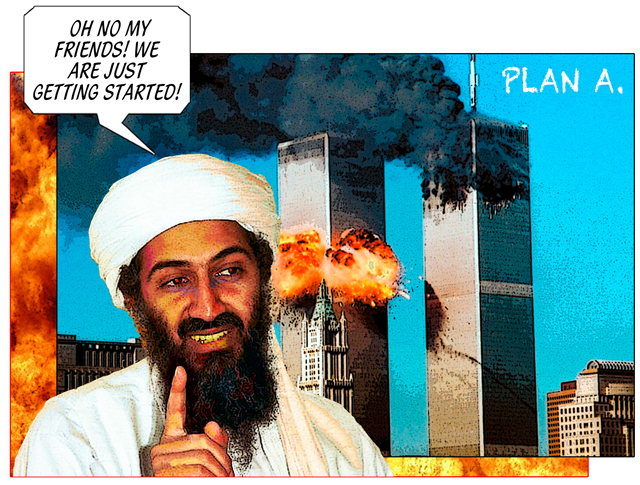 Did each side misjudge the other?

A fascinating article in the New York Post Monday reveals that “Osama bin Laden had been ‘very eager to replicate the 9/11 attacks’ against the US — and actively plotted to blow up oil tankers, derail trains and use private jets as weapons, according to a trove of seized documents.” Yet while there have been numerous jihad attacks in the U.S. since 9/11, none matched its magnitude. Osama wasn’t able to replicate, for as it turns out, he misjudged the U.S. as drastically as the U.S. misjudged him and his movement.

“The plots,” the Post reported, “were spelled out in more than 500,000 letters and files seized by the Navy SEAL team that executed the mass-murdering al Qaeda leader in 2011, according to Nelly Lahoud, an Islamic scholar who spent years carefully studying the trove.” In his eagerness to bring about another 9/11, but aware that airport security had dramatically increased, bin Laden told his followers to “consider chartering private jets to attack the US.” He also “spelled out a detailed plan to slaughter American commuters on a train.” Osama “wanted to have around 40 feet of track removed so that a ‘train could be derailed.’”

The jihad mastermind had other ideas as well: “In 2010, a year before his death, bin Laden plotted to target multiple crude oil tankers and major shipping routes around the Middle East and Africa.” This was because, according to Lahoud, Osama saw “the importance of oil for the industrialized economy” as “similar to blood for human beings. So, if you cause somebody to bleed excessively, even if you don’t kill him you will at least weaken him. He really wanted to do to the American economy.”

He certainly did severe damage to the American economy. The war on terror cost the United States trillions of dollars, and all it gave us was a diminished presence on the world stage, an onerous and irritating security apparatus in airports, and an emboldened jihad force worldwide that continues to pose a problem for governments around the world (often self-inflicted, in the form of mass Muslim migration).

But apparently Osama thought that his victory would be more comprehensive and immediate. According to Lahoud, he made a “huge miscalculation” in predicting how the U.S. would respond to 9/11. “He thought,” she says, “that the American people would take to the streets, replicate the anti-Vietnam war protests and they would put pressure on their government to withdraw from Muslim majority states.” All he expected as retaliation for taking down the Twin Towers was “a limited airstrike.”

A huge miscalculation indeed. But the U.S. miscalculated as well. Six days after 9/11, George W. Bush went into a mosque in Washington, accompanied by the head of a Hamas-linked group and another Muslim leader who is now in prison for financing al-Qaeda, and proclaimed that “Islam is peace.” This discouraged those who were trying to understand the beliefs, motives, and goals of the jihadis from investigating even the jihadis’ own statements, for fear of giving the impression that 9/11, and jihad terrorism in general, had something to do with Islam. The false assumption that Islam was a religion of peace deformed the American response to 9/11 in numerous ways, leading to wrongheaded policies on both the domestic and international fronts, with consequences that have yet to play out fully.

When Donald Trump tried to correct one of those wrongheaded policies by restricting immigration from several Muslim countries that would not or could not provide adequate information about the people who wanted to enter the United States, he was roundly denounced as an “Islamophobe,” as those who have spoken honestly about the motivating ideology behind jihad terror have been for years, and Joe Biden repealed the policy on his first day in office. How many jihad terrorists, including al-Qaeda members, are in the country now as a result of this, awaiting their best opportunity? We’ll find out.

There were miscalculations on both sides. Both thought that the other posed a threat that was smaller than it actually was. The Post notes that “al Qaeda had just $200,000 in its coffers in 2006 and was unable to support its increasingly fractious jihad.” It would be another miscalculation, however, to take that as a sign that the jihad is largely a spent force. Al-Qaeda is just one of many jihad groups around the world. Since the death of bin Laden, his group has been largely eclipsed by another jihad group that emerged from it, the Islamic State (ISIS). Bin Laden may have underestimated America in 2001; other jihadis are sizing America up in 2022, and it would be much harder to underestimate us now.

Robert Spencer is the director of Jihad Watch and a Shillman Fellow at the David Horowitz Freedom Center. He is author of 23 books including many bestsellers, such as The Politically Incorrect Guide to Islam (and the Crusades), The Truth About Muhammad and The History of Jihad. His latest book is The Critical Qur’an. Follow him on Twitter here. Like him on Facebook here.