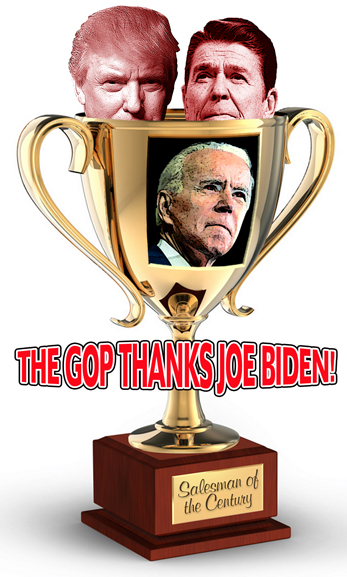 So, I know a thing or two about the GOP.

Some argument could be made that my hero Ronald Reagan is the greatest GOP salesman of all time. Reagan made America prosperous again. He single-handedly turned a generation of young Americans into proud Republicans. Everyone loved Reagan.

A strong argument can be made for President Donald J. Trump as the greatest GOP salesman of all time. Trump is a born salesman, showman and entertainer. All Trump did was pull off the greatest upset in presidential history by beating Hillary Clinton- even though she rigged the election by spying on Trump and his campaign staff.

Today, despite seven long years of media and social media hatred, slander, brainwashing and propaganda against him; just days ago, polls found Trump winning the 2024 presidential race by a 50%-36% landslide over Biden.

Speaking of Trump’s popularity, so far in the GOP primaries of 2022, Trump’s endorsed candidates are 55-0. This isn’t the GOP anymore, it’s the DJT- the Donald J. Trump Party.

But still, I’d argue Trump isn’t the greatest GOP salesman in history. That honor belongs to…

Never has anyone in history done a better job of turning the whole country into Republicans. That could be because in less than 18 months as president, Biden has turned the greatest country in world history into a combination of basket case and dumpster fire.

The economy is imploding- with negative GDP; over 20% real inflation; personal incomes down by 20%; manufacturing already in recession; worker productivity the lowest since 1947; and the stock market crashing.

We are suffering from massive hyper-inflation starting to feel a lot like Zimbabwe and the Weimar Republic. The middle class is being destroyed by gas and grocery prices. And it’s only getting started.

Because of Biden’s insane immigration policies, our border with Mexico is already wide open and about to get much worse- on May 23rd the entire world is coming to America. These are the
world’s poorest and sickest people- spreading disease and requiring cradle to grave welfare. And then there’s the crime wave they will bring- other countries are emptying their prisons to send their worst criminals, gangbangers and perverts to the USA.

I haven’t even mentioned the 1000-pound elephant in the room- Biden’s vaccine mandates. Millions of workers had to be force vaccinated, or lose their jobs. The result is skyrocketing
death and disability rates across the USA. Life insurance companies are in a panic- they report non-Covid deaths up 40% or higher since the vaccine mandate. Worse still, the Millennial death rate is up a staggering 84% since the vaccines.

And if Biden hasn’t killed your job with the awful economy…or your income with awful inflation…or literally killed or crippled you with his vaccine mandates…now he’s got us on the verge of
World War 3 with Russia threatening nuclear annihilation and China threatening an invasion of Taiwan.

1. Latinos have moved from lifelong Democrats to a double- digit GOP lead. Can you imagine? Biden’s disaster has moved an entire race of people to the GOP in only 18 months.
2. Parents with children under age 18 are now supporting the GOP by a 21-point landslide. Biden has turned liberal mothers into GOP “Mama Bears.”
3. Even young people are becoming Republicans. Biden’s ratings are lower among young Americans than any other age group. Stunning.

Yes, Trump is super-human. The man is unstoppable. A bull in a china shop. But still…

The greatest GOP salesman in history award has to go to Joe Biden.

Thanks Joe, you’re the best! You’ve turned the whole country Republican red. No one has ever done it better than you.