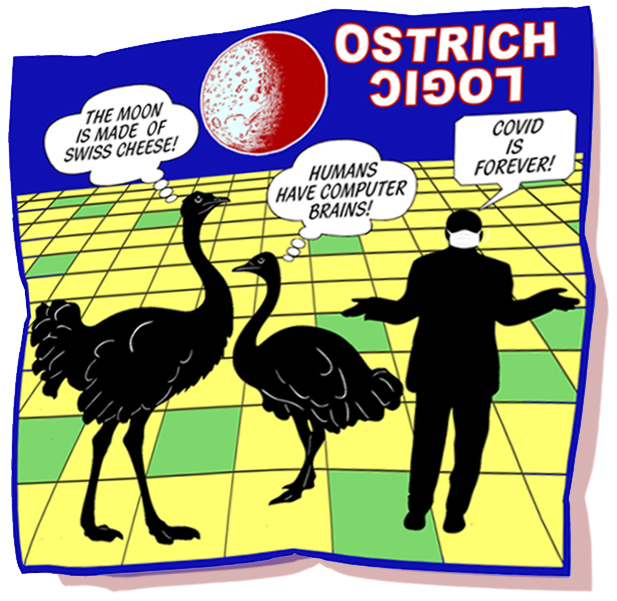 In a world in which logic and logical reasoning seem to be dissipating rapidly, university professor Gad Saad has coined a new phrase: Ostrich Parasite Syndrome. It refers to a common syndrome among all peoples, particularly the college professorships and students, whereby facts as evident as the existence of the moon are denied.

This disorder causes a person to reject realities that are otherwise as clear as the existence of gravity. Suffers from OPS do not believe their lying eyes. The construct an alternate reality known as Unicornia. In such a world, science, reason, rules of causality, evidentiary thresholds, a near-infinite among of data, data analytic procedures, inferential statistics … rules of logic, … and common sense are all rejected. Instead, the delusional ramblings of an OPS sufferer are rooted in illusory correlations, non-existent causal links, and feel-good progressive platitudes. OSTRICH LOGIC is always delivered via an air of haughty moral superiority.

On a more serious note, the creation of the category known as FAKE NEWS, ala Barack Obama, is now being used against the American people on a number of fronts. One item that came to my attention is that which is being now propagated by the World Economic Forum, headed by Klaus Schwab. It reads, “Klaus Schwab’s pet philosopher says, ‘Jesus rising from the dead and being the Son of God is fake news …’”

Schwab’s philosopher is Yuval Noah Harari. He is the elitist who tells us that “Humans Are Hackable Animals … Directly Connecting Brains to Computers.” Perhaps Harari’s brain has already been hacked. He certainly suffers the Ostrich Logic Syndrome.