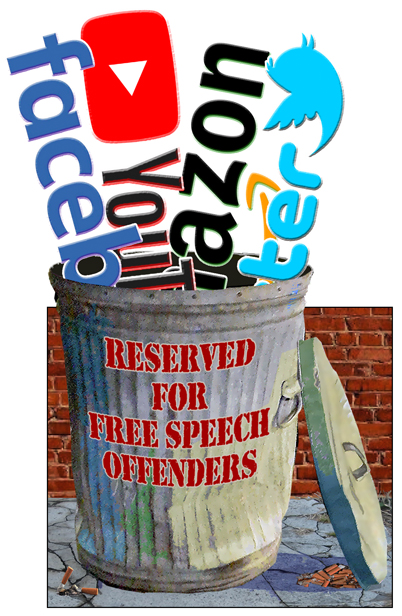 Noting that freedom of speech, the ability to express publicly one’s political or religious views without fear of reprisal of government entities, is one of the keystones of freedom. Thomas Jefferson weighed it even more seriously. “Our liberty depends on the freedom of the press, and that cannot be limited without being lost.”

One of the most alarming Acts that was passed in early America was President John Adams’ Alien and Sedition Act which specifically outlawed “conspiracies” that opposed “any measure or measures of government” and also forbade “any false, scandalous and malicious writing against the Congress or the president.”

Jefferson rightly fought against these totalitarian measures and subsequently defeated John Adams as president. Freedom of Speech is a cornerstone of liberty itself.

It is with great alarm therefore, that today we witness the crushing of freedom of speech by Big Tech companies such as Google, Amazon, and Apple and the outlets such as Facebook and Twitter. Felix Salmon at Axios wrote that, “Tech giants including Facebook, Google, Amazon and Twitter have moved to quiet Trump and the far right.” “The country’s CEO’s in general, and its tech CEO’s in particular, have found themselves capable of projecting their power into the White House in way that was both successful and unprecedented.”

Big Tech is a permanent political force, observes Luis Miguel, wielding awesome power – for the left. It can almost be considered a Fourth Branch of Government.

Gad Saad, writing in his new book, The Parasitic Mind: How Infectious Ideas are Killing Common Sense, dispels a common myth—that Big Tech companies are “private” and therefore ought to be able to censor whom they like. “Social media companies are not the government,” goes the reasoning. “They have a right to choose which content will be carried on their platforms.”

Saad responds. “In a sane world, this would be a laughable position to hold, and yet it is endlessly repeated without any reflection on its nefarious implications. Google, YouTube, Facebook, and Twitter have more global control over us than all other companies combined. It is not hyperbole to say that they have more collective power, in terms of the information they control, than all the rulers, priests, and politicians of history.”

“Big tech companies routinely ban right-leaning commentators, but of course this is all an unfortunate ‘algorithmic coincidence.’ What could be more sinister?”

To see the point, Saad illustrates. “Just as your electricity or phone line is not shut off if the electric company or phone company doesn’t like what you say, social media platforms should not be in the business of monitoring and punishing speech.”

To claim that these Big Tech companies are “private businesses” and should be free from government restraint also overlooks some fundamental facts. Big Tech receives “government subsidies, contracts, tax benefits, and regulations that keep smaller entrepreneurs from creating viable competitors,” observes Luis Miguel. “This can be seen today—when the establishment saw conservatives flocking to Twitter-alternative Parler, it wasn’t long before Amazon, Google and Apple colluded to shut the platform down.”

In short, the Main Stream Media and government itself—via Big Tech—is touting censorship against the American people. If free speech disappears, even under the guise of “monitoring misinformation,” liberty is lost.