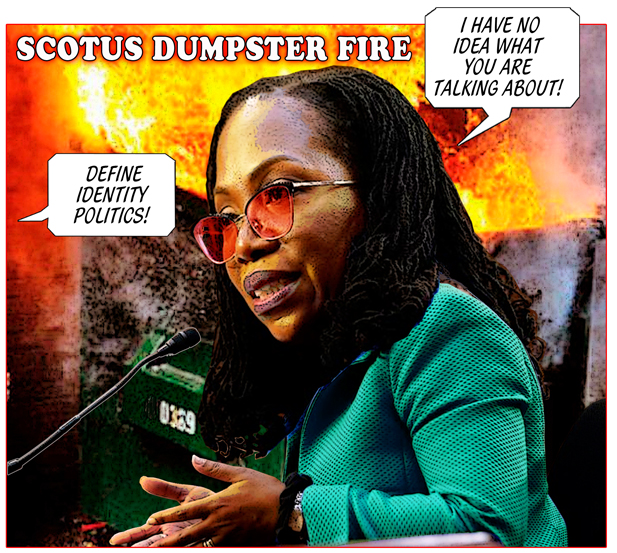 President Biden televised his phone call to Judge Ketanji Brown in which he informed her that she was nominated by him to the Supreme Court. In this short call Biden made clear the criterion by which he chose her. Diversity. As a black woman, she would help the Supreme Court to “look like much of America.”

Judiciary Chair Dick Durbin (D-Ill.) observed “Not a single justice has been a black woman. You, Judge Jackson, can be the first.”

He went on to say “It’s not easy being the first. Often, you have to be the best. In some ways, the bravest. Many are not prepared to face that kind of heat, that kind of scrutiny, that ordeal and glare of the national spotlight.” Then Durbin added, “We can be confident that the court, its role, and its decisions will be more understandable to the American public.”

Sen. Dick Blumenthal (D-Conn.) gushed, “The appointment of the first black woman to the Supreme Court—let’s be honest—should have happened years ago.” Her nomination “is a giant leap int the present for our country. Your service will make the court look more like America.”

This is unabashed irrational identity politics. Appointing an individual to a legal position primarily because she is a black woman, regardless of her qualifications—whatever they may or may not be. She must “look like America” in order for her “decisions” to be “understandable” or acceptable to the American people.

First, this is the opposite of what Dick Durbin stated. He implies that opposition to her will be based upon the fact that she is a black woman, showing a glimpse into the race card that Democrats will use if Republicans oppose her. She doesn’t have to “be the best,” Dick—she will rely primarily upon her race for her selection. What bravery is there in that?

Second, this is a tacit admission by Democrats that Constitutional and case law will be interpreted with bias. This is what liberals prefer. Forget Lady Justice being blind-folded. This destructive mindset demands Lady Justice take off the blindfold and “interpret” law and make decisions based upon the color of one’s skin and one’s gender.

But legal interpretation is supposed to be a “rational process by which we understand” a text– “scrutinizing” the text of the Constitution. Instead, Democrats are endorsing a biased, colored view.

Author and professor Gad Saad, in his The Parasitic Mind: How Infectious Ideas Are Killing Common Sense, shows that this is the result of a culture that promotes “Equity, Diversity, and Inclusion” above excellence and merit. To see how this mental orientation is a “collective malady” that destroys one’s ability and capacity to think rationally—which Saad calls “idea pathogens,” consider the following example.

In April 2017, the inaugural March for Science rally was held across hundreds of cities around the world to reaffirm the “importance of science.” The key website for this event in 2017 read this way.

At the March for Science, we are committed to centralizing, highlighting, standing in solidarity with, and acting as accomplices with black, Latinx, Asian and Pacific Islander, indigenous, non-Christian, women, people with disabilities, poor, gay, lesbian, bisexual, queer, trans, non-binary, agender, and intersex scientists and science advocates. We must work to make science available to everyone and encouraging individuals of all backgrounds to pursue science careers, especially in advanced degrees and positions. A diverse group of scientists produces increasingly diverse research, which broadens, strengthens, and enriches scientific inquiry, and therefore, our understanding of the world.

As Saad comments, this is “anti-science gibberish.” “By definition, science is, or should be, an apolitical process. Scientific truths and natural laws exist independent of researchers’ identities.”

Satirically, he adds, “the distribution of prime numbers does not change as a function of whether the mathematician is a white heterosexual Christian man or a transgendered, Muslim, differently sized (obese) individual.” Neither does the “periodic table of elements” depend on “whether or not the chemist is a Latinx queer or a cis-normative Hasidic Jew.”

These foolish notions promoted by the March for Science highlight that in the ecosystem of university campuses “mind pathogens” spread like wildfire. It is a pathogen because “… the manner by which scientific information is codified within the pantheon of human knowledge is not culture-specific.”

“Science does not care about the privileged position of ‘ancestral wisdom,’ ‘tribal knowledge,’ and ‘the ways of the elders.’’ There are no revealed truths in science. There is no Lebanese-Jewish way of knowing any more than there is an indigenous way of knowing.”

The same holds true of law and legal interpretation. Although one may argue that there are various theories of legal interpretation, a fair evaluation of these shows that without ‘original intent’ there might as well not be a legal text at all, in the Constitution or statutory law. Application of law is color-blind and is not culture-specific. There is not a “variety” of “equally valid forms of discovery” and interpretation.

What Democrats are confessing is that we are laying aside rational and logical thinking in favor of equity, diversity, and inclusion. Since this is the case, we might as well not have a Constitution.