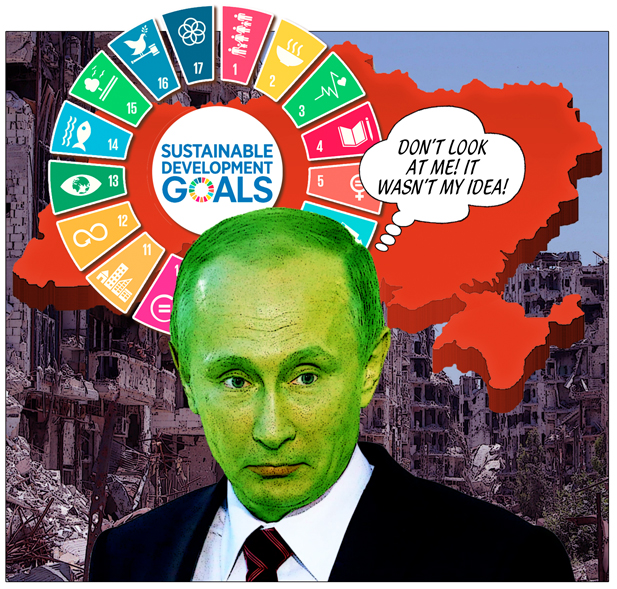 The Green Doctrine of Sustainable Development, maintained by our own government, is partially responsible for Putin’s invasion of Ukraine. This is not to ignore the wicked dictatorial actions of Vladimir Putin, nor to downplay the atrocities of the Ukrainian war that is now being waged by Russian forces.

However, it is worthwhile for us to consider what are some of the causes of the invasion. One of those causes is our own Green Energy Doctrine that is being maintained by the ruling oligarchs in Washington, D.C.

For those unfamiliar with the methodology utilized by government elitists to force their own belief-systems on the rest of us, consider the General Theory of Evolution. Philip Johnson, in his blockbuster 1991 book, Darwin on Trial, demonstrated the complete lack of objective scientific evidence supporting evolution. Yet, evolution, treated as “fact,” has been crammed down the throats of Americans via the Academy for well-nigh over 100 years.

Consider the evolutionary position. Natural selection, in combination with mutation, is an innovative evolutionary process capable of producing new kinds of organisms. That’s the proposition. And what sort of evidence is marshalled to support it?

Douglas Futuyma wrote Science on Trial: The Case for Evolution, which has been widely used in collegiate classrooms. The “evidences” for the above position include: (1) Bacteria naturally develop resistance to antibiotics; (2) Male sparrows survived more frequently than smaller ones in the 1898 severe storm in Massachusetts; (3) The average size of birds, and their beaks, at Galapagos Islands went up appreciably through the drought in 1977.

Futuyma included others—but one can immediately sense that these do not begin to show the general theory of evolution. How did bacteria come to exist in the first place? Where do sparrows come from to begin with? How did birds on Galapagos Island come to exist? None of his examples begin to scientifically establish the general theory of evolution as explanatory of all forms of life. Yet, evolution is considered “fact.”

It is the same with theory of man-made Climate Change, a key component of the doctrine of Sustainable Development. The Green Agenda, the official doctrine of the United Nations as well as the elitists in Washington, D.C., is that of that Climate Change is human caused. That’s the doctrine. Hence, we must have draconian government control known as “Sustainable Development.” Government controlled everything.

Nevertheless, climate change is declared to be an “existential crisis” that threatens human existence. Leonardo de Caprio picks up the Green Gospel and tells the UN that wildfires worsen in America because of human caused carbon emissions. Even more apocalyptic is Alexandria Ocasio-Cortez, a sitting member of Congress, who says “The world is going to end in 12 years if we do not address climate change.” That was in 2019.

Doomsdayers such as these continue to multiply. It would not be so bad for Americans, except that many of them are lawmakers, or have the ear of lawmakers. The answer: shut-down America’s dependence upon fossil fuels—oil—and force us into a Green Energy world where everything will be solar or wind powered.

President Joe Biden, our chief executive officer, has completely bought into this. Not because he necessarily believes any of this doctrine—but this is the method to gain socialistic control of the economy. His primary political agenda involves unconstitutionally forcing America itself to leave an oil-based economy and into “Clean Energy.” Once again, no debate. No discussion.

Thus, as soon as he came into office Biden single-handedly, on day one, shut down the Keystone Pipeline. According to the Center for Strategic and International Studies, last January—within the first week of occupying the Oval Office, he issued an “executive order that introduced a sweeping, government-wide approach to climate policy.” His administration is “halting new oil and gas leasing on federal onshore lands and offshore waters.”

Biden also ordered the secretary of the interior to consider whether to adjust coal, oil, and gas royalties in order to account for corresponding climate costs, as well as ordering the Department of the Interior to take steps toward conserving 30 percent of public lands and waters by 2030 and toward doubling offshore wind production. These moves followed his executive orders to halt leasing the Arctic National Wildlife Refuge and effectively suspended new leases. Other draconian measures followed.

What has this to do with the war in Ukraine? Only this. The complete executive blockage of our own oil production has forced America to rely on foreign imported oil—namely, from Russia. While impoverishing America, Biden has purposefully enriched Russia.

History professor and Hoover Institution fellow Victor David Hanson, pointed out the obvious connection with Putin’s War on Ukraine. Putin has become “adventuristic” whenever he has been flushed with cash due to limited oil production in the United States. Hanson cited the 2014 attack on Crimea and the 2008 invasion of Georgia as examples.

Who has flushed Putin with cash? Biden has forced America to do that.

Mr. Biden, you need to be honest about the damage you’re doing to the American energy industry. In fact, you’ve done everything you can to drive up prices and you know it because you’re dancing the radical green tune. Your jihad against fossil fuels has held down production in the face of rising demand and that has been a key factor in driving up world oil prices towards $100 a barrel. In effect, Biden’s jihad against fossil fuels is financing Vladimir Putin’s military adventures because if we were producing at 13 million BPD as we did pre-pandemic … oil prices would be substantially lower and Putin would be significantly poorer.

While the atrocities in Ukraine continue at the hand of Putin, remember that Biden has helped fund him.