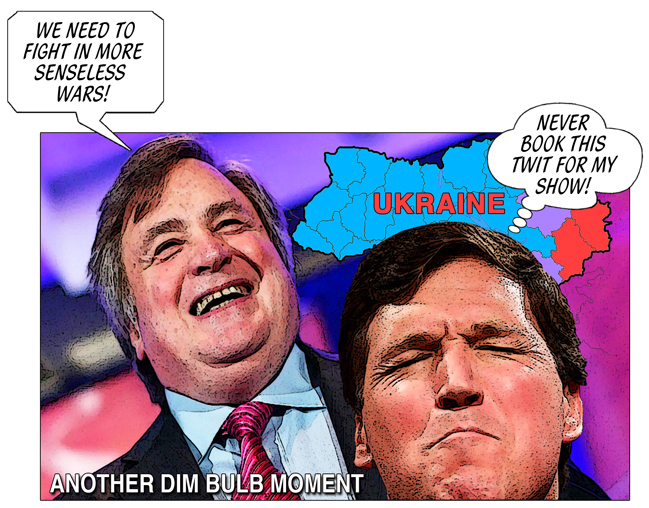 Tucker Carlson of Fox News has come under attack for his libertarian ideals. This has particularly irked the internationalists, Republican and Democrat, who wish America to be forever entangled in foreign alliances and eternally obligated to fight foreign wars.

Dick Morris writes today in Newsmax magazine that “Tucker Carlson Went Off the Rails Backing Putin, Shame on Him.” Tucker Carlson has not appointed anyone to defend himself against the internationalist campaign to discredit him, and I would be the last one to be so appointed. However, having followed Carlson carefully for a long period of time, and subscribing to the identical worldview and foreign policy ideal as he advocates, I take in hand to answer Dick Morris.

First, Morris declares that Carlson “supports” the Russian dictator, and “would back Russia over innocent Ukraine.” This is bogus. Carlson has continually, upon a regular basis, declared a position of NEUTRALITY and NON-INTERVENTION in foreign wars. To paint this as “support” for Putin and dictatorships over “innocent” people is pretty despicable. Dick Morris: how does neutrality support one over the other? Why not state Carlson’s position exactly?

To the “internationalists” of the world, which in reality means they favor continual interventionism at the expense of the American taxpayer, the most egregious transgression is non-intervention. Morris exposes himself.

In other words, according to Morris, if Putin would just back off, we would not have to go to war with him. It is all Putin’s doing.

Morris is suffering from a lack of common sense. The Democrats have been painting Russia as the number one problem in the world for months and months. Their hypocritical and manufactured criticism of Donald Trump was that he was a Russian puppet and that Putin was public enemy #1.

Third, to support his US Interventionism, Morris says that it is Russia, not China who “controls the world’s largest nuclear arsenal.” Several things here. One, if so, why has the Democratic Party been involved in supporting the nuclear program of Russia, beginning with the Obama Administration’s Uranium One deal that gave Russia an interest in a large portion of America’s uranium?

Two, Morris is playing subterfuge. The largest army in the world belongs to CHINA. This is not to downplay what is going on in Ukraine at this hour, but let us not pretend that China is only an “emerging threat.”

Fourth, and the most important point, is that Morris states that Putin’s actions constitute “an immediate threat to the United States and our allies.”

Granted that our allies in Europe are immediately under attack. But Carlson’s point, and mine also, is: What has this to do with American interests? This is not to ignore the crisis in Ukraine, but to ask—What exactly is the American interest there? Listen carefully to Morris answer this:

Ukraine is not ‘vital’ to the U.S.? I guess the Sudetenland, Austria, Czechoslovakia, and the Polish corridor weren’t either, until they were, and led to a cascade of troubles we now call WW II.

Boil this down. Logically, this means that any incursion anywhere in the world could possibly escalate into greater conflicts and even wars in which America must be involved. So, per Morris, we are bound by “moral obligation” to send our sons and daughters everywhere wrongs are committed and die for those nations. Am I the only one who sees something drastically wrong with this policy?

Even with the outbreak of World War II, America wanted to remain neutral. According to Navy Commander Robert Stinnett, who was later Research Fellow at the Independent Institute, and author of the book Day of Deceit: The Truth About FDR and Pearl Harbor, the American people were decidedly against the United States entrance into WWII. It was the duplicitous FDR who helped provoke the Japanese to attack Pearl Harbor and give us an excuse to get into the war. But Stinnett “justifies” this treasonous act of FDR because he got us “out of” a non-interventionist policy (which globalists call “Isolationism”) and helped create the new foreign policy of “internationalism.”

Unfortunately, Morris suffers from being an “internationalist” first, and an American second. The American people are tired of the warmongering of our leaders across the globe while we ourselves are under assault on our southern border, turning our inner cities into war zones. If we cannot even control our own borders or clean up our own cities, why bang the drums for war on foreign soil?