John L. Kachelman, Jr.: “When the rule of law unravels” 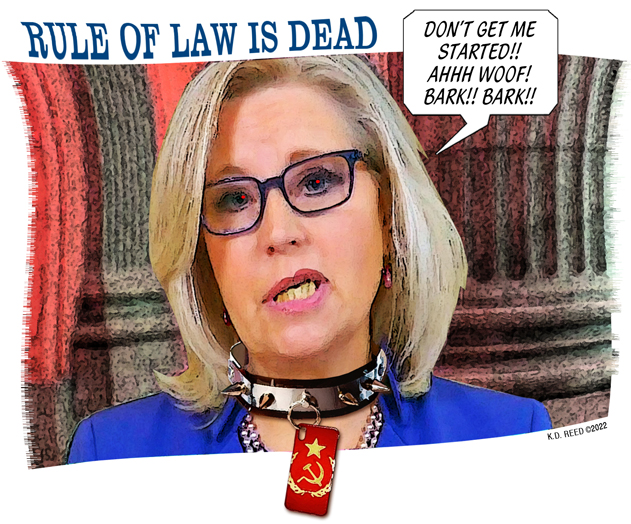 In “Sweet Home Alabama” I was raised to expect accountability for stupidity. Of course, many wish to evade personal culpability for their actions. But one’s “feet are held to the fire” and accountability is unexcused. People still try to evade their actions. They project their uncivil, criminal and self-centered actions onto others trying to justify what they have said and done. But it does not “hold soap.” So, downhome simple language tags them with the idiom, “Bit dog hollers first and loudest!” These folks are “called out” for their arrogant attempts to dodge the evil they have fostered. There is eventual accountability even when the arrogant attempt to excuse themselves of their dastardly deed.

The idiom “bit dog hollers first and loudest,” was instantly associated with a comment made by HYPERLINK “https://www.thegatewaypundit.com/2022/01/liz-cheney-adam-kinzinger-respond-newt-gingrich-saying-lawmakers-jan-6-committee-thrown-jail/” Liz Cheney (23 January 2022): “A former Speaker of the House is threatening jail time for members of Congress who are investigating the violent January 6 attack on our Capitol and our Constitution. This is what it looks like when the rule of law unravels.”
Here is the female application of “a bit dog hollering first and loudest.”

This is an incredible statement voiced with a delusionary arrogance. The audacity of her tagging the truthful words of Speaker Gingrich as unraveling the Constitutional “Rule of Law” is shocking. She refuses to see her “rule of law” unraveling in the Burn Loot Murder riots; in the trashing of constitutional freedoms; in the onerous “mandates” used to control and dictate to the population; in the uncivil actions of the national governing Body; and a myriad of other actions that “unravels” the true Rule of Law (the U.S. Constitution)! Incredulous! Shocking! Unbelievable! My immediate response was, “Did she really say this?”

Look how history exposes her arrogance. HYPERLINK “https://ipanews.info/holy-devil-rasputin-bolshevik-revolution-lenin-stalin-solzhenitsyns-warning-america/” Alexander Solzhenitsyn was quoted in The Observer, December 29, 1974: “In our country the lie has become not just a moral category but a pillar of the State.” Typical of the courageous Solzhenitsyn was his insight into the tyranny of totalitarians. It is remarkable how accurate his observation applies to today’s national governing.

Another historic anecdote exposes not only the actions of Cheney, but the overwhelming majority of DEMS/REPUBS in the U.S. Congress. We are observing the revival of Stalin’s tactic called “ HYPERLINK “https://ipanews.info/holy-devil-rasputin-bolshevik-revolution-lenin-stalin-solzhenitsyns-warning-america/” psychological projection” or blame-shifting. A politician publicly accusing his opponents of what he himself is guilty. Pay close attention to how this political maneuver is evident in the political tyranny emanating from Washington, DC..

In Communism: A History, Richard Pipes aptly describes how Stalin used a government fabricated crisis–which he blamed on his opponents–as an excuse for the government to seize more power: “Stalin’s regime needed another crisis … as Fidel Castro, the leader of Communist Cuba, would explain … ‘The revolution needs the enemy … The revolution needs for its development its antithesis’ … And if enemies were lacking, they had to be fabricated … In 1934, a prominent Bolshevik, Sergei Kirov, the party boss of Leningrad, was assassinated under mysterious conditions … evidence points to Stalin … Kirov was gaining too much popularity in party ranks for Stalin’s comfort. … His assassination brought Stalin two advantages: it rid him of a potential rival and provided a rationale for instigating a campaign against alleged anti-Soviet conspirators …”

HYPERLINK “https://www.goodreads.com/work/quotes/15121049” Derek Landy has well said, “The lies we tell other people are nothing to the lies we tell ourselves.”
The eminent satirist HYPERLINK “https://www.bartleby.com/209/633.html” Jonathan Swift astutely commented on Political Lying by saying, “Falsehood flies, and truth comes limping after it, so that when men come to be undeceived, it is too late; the jest is over, and the tale hath had its effect.”
The troubling reality of Cheney’s “rule of law unraveling” will ultimately be exposed but by that time “the tale hath had its effect.” The cowardly silence of the national POLS will be chronicled, but the damage will have been done. To the reigning POLS who remain silent and cowering when evil lies are nationally broadcast, I ask, “What is better: uncomfortable truth or comfortable lies?” The general positioning of the REPUB leadership and caucus evidences their surrender to the flagrant lies.

The lies multiply…within days of Cheney’s arrogant “psychological projection” came a number of published articles illustrating the absence of integrity in the national governing Body. I am including the links and urge the reader to read the articles that expose the shenanigans that now characterize the “Ruling Elite” in Washington, DC.

First read an article published 23 January 2022: HYPERLINK “https://bigleaguepolitics.com/biden-administration-drops-charges-for-dozens-of-antifa-rioters-who-laid-waste-to-portland/” Biden DROPS All Charges Against Antifa from Big League Politics. “The federal Department of Justice has dismissed cases for 31 ANTIFA thugs who were charged with crimes related to rioting in Portland, OR. Four defendants who were charged with felony assault of a federal officer had those charges dropped. More than half of the charges were ‘dropped with prejudice,’ meaning that those cases cannot under any circumstances be brought up again in court…The Federal Bureau of Investigation (FBI) is claiming that there is ‘no intelligence’ indicating that ANTIFA had a role in fomenting riots that have gripped the country.” Is this not amazing?

The Burn Loot Murder/ANTIFA walk free leaving in their wake billions of dollars in destroyed property and lives evilly taken by racism. BUT the J6 protesters who are unconstitutionally imprisoned, because of the political purge, are locked up and the cell keys (along with the Constitutional protections of life, liberty and justice) are thrown away!

Second an article published 24 January 2022:  HYPERLINK “https://www.thegatewaypundit.com/2022/01/joe-digenova-clear-ray-epps-war-operating-cut-fbi-video/” The curious case of Ray Epps. Discusses the J6 instigator who led efforts to storm the US Capitol but for some strange reason has never been indicted or investigated by the FBI and the Biden regime. Ray Epps was a “cut-out” — an operative working for the FBI. Democrats used the “whistleblower,” Eric Ciarramella, in the Trump impeachment scam as the cut-out for their source, like Vindmann, who was on the Ukrainian call with President Trump. Once again, the specter of Stalin’s psychological projection is exposed.

Third, an exceptional article was published 24 January 2022 reporting the evil of HYPERLINK “https://www.thegatewaypundit.com/2022/01/german-professor-faucis-bombshell-e-mails-bears-full-responsibility-held-liable/” Fauci‘s Bombshell E-Mails: “He bears full responsibility; he should be held liable,” wrote Richard Abelson. This lengthy article is a MUST-READ. The emails reveal the evil intent of Fauci and his morally bankrupt storm troopers. “Anthony Fauci, Francis Collins, Peter Daszak, Jeremy Farrar and others involved in ‘Gain of Function’ research at the Wuhan Lab conspired to quash any investigation into the true origins of the Covid-19 outbreak and their culpability.”

Again, he noted: “The explosive thing is that they make it very clear that we are dealing with a massive cover-up of the origin of the Covid pandemic…From the e-mail correspondence, it appears that there was collusion, coordinated by Anthony Fauci, Francis Collins and Jeremy Farrar of the Wellcome Trust.”
This report validates a document proving virologists actually planned and applied for experiments that have the potential to be a genocide-level event.

And then this shocking conclusion: “I know from conversations with American colleagues that the intelligence agencies commissioned by President Joe Biden did not really investigate at all.”