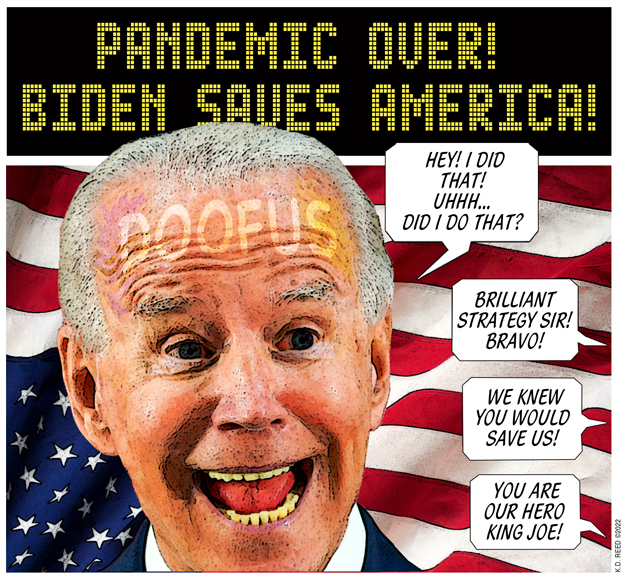 Well, look at this. It’s beginning to be cool again to be truthful if you are a physician or work in the medical profession. The New York Times, The Atlantic, Bill Maher, and other liberal outlets are now running articles saying the absurdity of masks, mandates, boosters and school lockdowns must end. For the past 2 years, if a physician said anything negative about vaccines, masks, Fauci, or lockdowns, there was a risk of everything from censorship to loss of employment to loss of medical licensure.

Consequently, physicians remained largely uninformed and misinformed or simply cowered in fear of opening their mouths to object to the medical tyranny on full display. It was very disappointing to observe physicians across the country relinquish their responsibility in the medical management of the individual patient and turn that management over to autocratic and totalitarian bureaucrats.

Meanwhile, back at the academic medical centers, those physicians were receiving their generous NIH research grant checks which kept them in line and signed up for the vaccine and mandate cause. I think you can also throw hospital administrators into that compromised group who have been on the receiving end of taxpayer largesse.

Physicians have also been complicit in denying early treatment strategies using repurposed safe and approved drugs such as hydroxychlorine and ivermectin that could have saved thousands of lives. But, of course, the availability of effective treatments would have taken away the emergency use authorization (EUA) of the genetic “vaccines”, and we couldn’t have that. So, the physicians readily accepted the CDC disparagement of these drugs and became active participants in the promotion and administration of genetic “vaccines” who still have the EUA.

But it wasn’t just physicians who were taken in by all this nonsense. Smart psychologists and bioethicists have been writing about and explaining mass formation psychosis which explains how social isolation and “free floating anxiety” (anxiety not tethered to a source which can be visualized, I.e. you are anxious but don’t know why) can lead to anger and blind following of “leaders” who explain the cause of the anxiety (Covid and the unvaccinated) and offer a solution (vaccines and mandates). Millions of people were manipulated by these psychodynamics which were exploited by cleverly evil political leaders. I won’t go into detail about mass formation, but if interested, I recommend listening to the Joe Rogan podcast interview of Dr. Robert Malone on Spotify.

As Pfizer and Moderna rolled out their drugs for mass inoculation, and rolled up billions of dollars in profits, it quickly became obvious the “vaccines” were to be ineffective and potentially dangerous as the adverse events reported in the CDC VAERS data exploded.

Physicians should have locked arms in solidarity and said not just NO but HELL NO.

Instead, the vast majority of physicians meekly climbed aboard the boxcars of the Fauci submission train and took the inoculations and then eagerly participated in promoting the “vaccines” to their patients who were given the experimental (that’s right, experimental) shots without any semblance of informed consent. So much for the Nuremberg Code, the Hippocratic Oath, the Declaration of Helsinki, general medical ethics, and numerous Constitutional rights. Who needs all that ethics stuff when we have Biden, Fauci, and the CDC?

So here we are one year later, and we are beginning to see the facade of this evil plandemic start to crumble. Apparently, the political totalitarians in Washington, the CDC, and leftist “journalists” in the liberal media are reading the polls and realize the majority of the American people have had enough and Democrats may lose their grip on what they value most – totalitarian power to tell the rest of us how we are to live our lives.

The CDC released data 2 days ago that proclaims natural immunity is better than vaccine immunity. Can you believe it? The CDC could have said that 2 years ago as any sophomore medical student knows natural immunity is the gold standard compared to vaccine immunity. In that CDC data, Covid recovered patients are 27 times less likely to be hospitalized and 6 times less likely to die than the vaccine only patient with no prior Covid infection.

It sounds like the elites have finally reached their inconvenienced threshold and want out of the propaganda. They want their kids back in school, they don’t want useless boosters ad infinitum, and they are tired of wearing their masks and having to show their “papers” to go anywhere. Have you noticed they are vacationing in Florida and then moving there or to Texas? However, we may be seeing the beginning of the new propaganda which rejects the previous Covid narrative and we will soon hear the pronouncement that “Hallelujah, the pandemic is over”, thanks to the Herculean efforts of Joe Biden who needs you to vote Democrat this November so he can continue succeeding for the American public.

Hang on to your wallet and your barf bag.