John L. Kachelman, Jr.: Whose Conspiracy Is It? 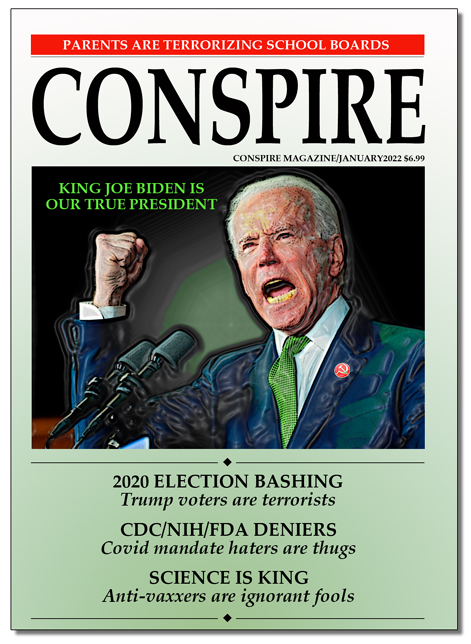 I’m speaking to the Ruling Elite…YOU scornfully claim I wear a tinfoil hat and idle the time away in delusional dreaming of imagined political catastrophes. YOU scoff at my concerns and dismiss my patriotism with comic memes. YOU casually prance from day to day as if everyone and everything in this world is at your “beck and call.” YOU utter illegal and absurd mandates and heartedly condemn non-compliance but then you hold yourself aloof from the compliance you demand from others. YOU claim I am obsessed with conspiracies that are unfounded and serve as fodder for insurrectionist protests when in reality it is YOU fomenting the conspiracies. YOUR childish antics are deserving of the playground retaliatory quip: “I’m rubber, you’re glue, whatever you say bounces off me and sticks on YOU!” The true conspiratorial insurrectionist is YOU!

The most brutal political practice ever weaponized is the planting, nurturing and then oppression of “conspiracies.” Even though this word “conspiracy” has been publicized by today’s political Elite, it is not novel. From the Beginning of time conspiratorial thoughts have attacked the Rule of Law. In the Garden, the Devil suggested the Forbidden Tree was off-limits because God Almighty wanted to keep mankind different from Deity.

From the Beginning of time conspiracy has been used as a leverage to further the agenda of the Elite so they will gain more power and greater riches. This evil ambition is not confined to any geographical borders, language, ethnic race, or political inclination. Power is possessed and ambitious evil wants more and more; seeking gain through fear, intimidation and false accusations.

In order to frame the purpose of conspiracies we need to ask, “WHO benefits from accusations of conspiratorial theories?” This is a significant but overlooked query.

Conspiracy is an action of a group who strategize an unlawful, harmful, or evil plan. This is formulated in secret. Its intent is for harmful or evil purposes. It is an agreement by two or more persons to commit a crime, fraud, or other wrongful act for a given result. It involves planning, coordination, information dissemination and an objective. The term is always used in the strongest negative connotation.

The success of the conspiracists depends upon a sliver of truth wrapped with lies and propagandized to manipulate and achieve the evil objective. The conspiracy is presented with the message that the ones exposing and punishing the conspiracy are acting for the “greater good.” “Who” would dare stand in the way of the “greater good.” Thus, the conspiracists define the “greater good” in a manner furthering their ambition.
A survey of civilization illustrates this evil action; furnished are myriads of examples. Revealed is the Rulers’ tyrannical oppression of the Ruled. Once the Rulers publish their delusional conspiracies, they are justified in punishing those guilty of the imaginary threats.

Perhaps the most recognized example comes from the evil of Fascist Germany (1930). It was through propagandized conspiracies that the German public accepted the mass murder and systematic killing of Jews, gypsies, homosexuals and disabled persons during the Holocaust. These groups were targeted by the Fascists and killed in crematoriums and concentration camps. It was the media publications that manipulated people’s thoughts to develop anti-Semitic, anti-gypsy, anti-homosexual and anti-disabled hysteria. Circulating the conspiratorial rumors, established prejudices and discriminatory practices and encouraged the escalation to an accepted state of violence.

A frightening summary of how political talking-heads used conspiracy to justify the State-sponsored police action is stated in an article titled “Has The World Become Nazi Germany?”
“As a child survivor of the Nazi reign of terror I learned indelible lessons about the nature of evil… Academic science, the military, industry, and clinical medicine were tightly interwoven as they are now. The Nazi system destroyed a social conscience in the name of public health…Nazi propaganda used fear of infectious epidemics to demonize Jews as spreaders of disease, as a menace to public health…Medical mandates today are a major step backward toward a fascist dictatorship and genocide…these undermine our dignity as well as our freedom…The stark lesson of the Holocaust is that whenever doctors join forces with government and deviate from their personal professional clinical commitment to do no harm to the individual, medicine can then be perverted from a healing humanitarian profession to a murderous apparatus…What sets the Holocaust apart from all other mass genocides is the pivotal role played by the medical establishment…Medical doctors and prestigious medical societies and institutions lent the veneer of legitimacy to infanticide, mass murder of civilians.” (Holocaust survivor and medical patients’ rights activist Vera Sharav)

The tyranny of the Rulers oppressing the Ruled by delusions of “conspiracies” is not limited to the past. Our current times are witnessing a similar manipulation. The evil Political Elite seek to numb the population’s awareness by claiming accusations of wrong doing are mere “conspiracies.” It is not uncommon for those questioning the Elite’s agenda to be rebuffed with, “Come on now! You are sounding like some of those crazy Conspiracists!”

Published in HUMAN EVENTS, June 5, 2021 is an excellent analysis by Jim Hanson titled AN INVENTED INSURRECTION: How the left is trying to criminalize conservatism. Hanson’s astute analysis was used a month later in another outstanding analysis by Michael Austin in the Western Journal. Austin’s report was titled: Investigative Report: Dems Are Using ‘Invented Insurrection’ to Create 2nd War on Terror Targeting Americans. Hanson’s conclusion aptly frames the diabolical objective of the Elite Rulers. The Rulers were seeking to tyrannize the subjected Ruled. Hanson states, “The only conspiracy here is by the left to deprive their political opponents of their Constitutional rights.”

The Ruling Elite are being pressed to declare more conspiracy theories because their façade of integrity is crumbling. More are becoming aware and are questioning the tyranny they have gullibly accepted. When the Rulers feel pressed, they strongly react. A greater tyranny, a greater propaganda, a refashioned mission strategy and a greater intolerance will emerge.

This development is currently observed. It is a reality—look at those wrongfully arrested, illegally imprisoned, unconstitutionally beaten, starved, deprived in DC jails following the J6 protests against the State’s illegalities. The Rulers are threatened. Their retaliation is harsh and inhumane designed to “teach a lesson” to others who might think of non-compliance.

On January 13, 2022 Jim Hoft published a shocking article titled: BREAKING: OathKeepers Founder and President Stewart Rhodes Arrested — Charged with Seditious Conspiracy a Year Following Jan. 6 Protests. The desperation of the Ruling Elite is evident. Their media propaganda has miserably failed to deceive the population. The imagined charges of “conspiracy” are intended to stoke fear and compliance. When the Rulers fail to see this response, it acts with a greater hostility. Their power and wealth are slipping; their evil ambition’s appetite is not satisfied. The Rulers are beside themselves not understanding why the Ruled refuse to cower and comply.

If you want to see the extent to which the Rulers are desperately trying to maintain their tyranny over the Ruled, just look at the “conspiracies” they have announced. These are conspiracies are concocted by the delusional mind to justify the tyrannical despotism of Washington POLS and entrenched Bureaucrats. These are desperate to feed their selfish ambitious appetite. They are desperate to cling to power and wealth that are extorted from the citizens of our Republic! Here are just few and you can add to the list:

Be assured that much more will be written about the “conspiracies” fomented by the evil Rulers to maintain their control over the Ruled. The conspiracies ARE NOT the product of the concerned citizens BUT ARE the product of the evil Rulers seeking to discredit, disparage and decry the integrity of those pursuing the Truth. Look back at the opening paragraph—let the RULING POLS know this fact, YOU bear the blame! Do not excuse or elevate yourself to an aloofness that depreciates another person or group.

One final illustration fittingly portraying the current affairs in our nation’s Capital. Inside the Beltway all seem impervious to the reality of the citizens in the USA. These, inside the Beltway, have assumed an elitist position; they are aloof, insensitive and unconcerned.

Now listen to this…History records the tyranny of a Ruler over the Ruled. This woman was a hated Hag; an ugly old woman, vicious and malicious. She was ungodly and trained her son in evil. Her son was justly executed, and the mother usurped the throne making herself queen. She is forever known as a murderer, even killing her own children so her position would be secured. Inevitably the wheels of justice turned bringing her downfall. The nation returned to the Rule of Law and she was held accountable. When she was being removed and the Law was being restored, she “tore her clothes and cried out, Conspiracy! Conspiracy!” (2 Kings 11:14).

Such reveals a simple truth—those crying “Conspiracy” are the ones who need to be arrested, adjudicated, and punished. This truth is historically validated but scornfully ignored. Again, I ask, in order to frame the purpose of conspiracies we need to ask, “WHO benefits from accusations of conspiratorial theories?” The answer is the Ruling Tyranny benefits because it gives a delusional legitimacy to oppress and punish!