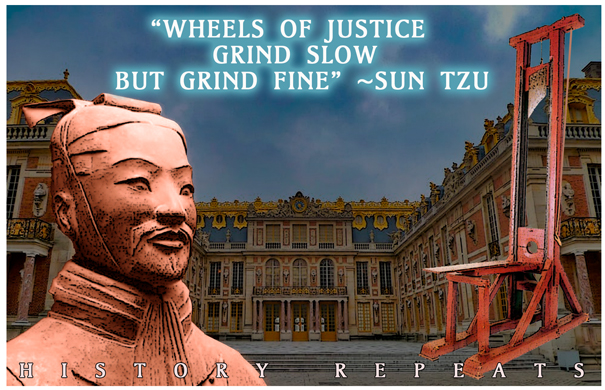 The chronicles of civilization’s governments are the ultimate record of failed recycling. Mankind never learns! The greatest fail is the repetitive recycling of tyranny. Mankind complacently accepts subjection to immoral and evil authorities. The historicity is undeniable. Briefly observe how two historical government fails highlight the current conflict in our Republic (obviously there are many more examples but we only have time for two).

First, consider the majesty of Versailles Palace. This is remarkable in history. The Palace of Versailles, was the French royal residence and center of government, but it transformed into an extravagant complex. A telling fact about this grandiose structure, every detail of its construction was intended to glorify the king. The construction’s focus was on the Ruler. The ruled were ignored; they were viewed as inconsequential.

The chaos led to degradation in economic, political and civil environments. On 15 July 1789, the storming of the Bastille panicked Versailles. The courtiers started to abandon the Palace. This beginning trickle soon became a flood and the Palace was emptied of its occupants.

The royal family left Versailles on 6 October 1789. The Palace of Versailles ceased to be a royal residence. It fell into disrepair and eventually was restored as a historical landmark of a failed government.

Second, consider Germany’s Third Reich. The history of this fail is well-known. The “rise and fall” of this government focuses directly upon those who served as its major leaders and the Reichstag members who permitted and approved the governing evils. The government failed because of its evil advocates.

In November 1945 the high-ranking surviving officials of the Third Reich were placed on trial before the International Military Tribunal (IMT) in Nuremberg, Germany. Among them were Göring, Ribbentrop, Frank, Rosenberg, Kaltenbrunner, and Hess.

The trial exposed the details and scope of the criminal governing. Accounts of inhumanity were listed; evidences of tyranny’s authority were validated; the bankruptcy of a political arena where dissent was punished was highlighted; the evil of a national governing that denied personal freedoms was a common factor.

Nuremberg established the horrors of a government that believes it can mandate what the citizens believe, speak, reside, travel and behave. Such behaviors were decided to be inhuman and worthy of capitol punishment. No excuse was permitted to justify such evil behavior.

The result of this trial should be sobering to all politicians. On October 1, 1946, 12 of the defendants were sentenced to death, three were acquitted, and the remaining defendants received prison sentences. Göring, committed suicide in his cell, and ten defendants were executed on October 16, 1946. Hess was the last imprisoned Nuremberg defendant to die in 1987.

It was a humiliating end to a government ruled by tyrants. What about the Reichstag congress? What about those “elected” to serve the population? Following the Nazi seizure of power and the Enabling Act of 1933, this “governing body” was only a rubber stamp for the actions of Hitler’s dictatorship. It was useless. It was inept. It was culpable in the fascist tyranny. Those serving in the congress, only furthered the State’s dictatorship. The “Party” always gave unanimous consent — no one dared to vote against the controlling personalities.

History reveals that…a government born from lies, maintained by fear and ruled with opinionated mandates was pure evil. The propaganda that fueled the citizens’ compliance was a manipulative ploy of the politically arrogant. The horrible “science” that funded the use human beings as test subjects, was pure evil manipulated by a heinous man. Every aspect of the Reich’s governing was exposed as pure evil. There was absolutely no justification or rationalization for the government’s actions. Yes such was applauded but it was an abomination!
Now here is the undeniable point to ponder on the “Fall of Versailles”—there is ultimately a punitive justice meted to those who arrogate to themselves an evil tyranny! Justice is coming to those who propagandize, “mandate,” coerce with arrogant authority, who market in human trafficking by medical experimentation, and, who occupy an elected position but remain silently compliant. Justice is coming!

Here is another recycled historical fact. Listen to its echoes throughout the centuries:

• “Wheels of justice grind slow but grind fine” ― Sun Tzu
• “So then, I have seen the wicked buried, those who used to go in and out from the holy place, and they are soon forgotten in the city where they did thus” (Solomon, Ecclesiastes 8:10, The Bible).
• Euripides, one of the greatest tragic writers of ancient Greece (480-406 BC), “Slow but sure moves the might of the gods.”
• Plutarch said, “Thus, I do not see what use there is in those mills of the gods said to grind so late as to render punishment hard to be recognized, and to make wickedness fearless.”
• “Though the mills of God grind slowly, yet they grind exceeding small; Though with patience He stands waiting, with exactness grinds He all.” ― Henry Wadsworth Longfellow

Perhaps most tragic is the lesson focusing on our Republic. We are ruled by those who have no regard for personal liberty. Who wield the powers of government in a vindictive manner. Who care little about the economic calamities that fuel starvation while they feast on “gourmet” foods, party-hardy and enjoy mansions. Who feign concern for the poor only to the extent where they can personally profit. Who make scurrilous criminal charges against political enemies. Who propagandize lies as “truth.”

Gone are the politicians who actually “serve” the citizenry. Present are those who “serve” themselves. You can observe the behavior and listen to the bitter words of these politicians. Such are well described as “lovers of self, lovers of money, boastful, arrogant, slanderers, disobedient to parents, ungrateful, unholy, unloving, irreconcilable, malicious gossips, without self-control, brutal, haters of good, treacherous, reckless, conceited, lovers of pleasure rather than lovers of God, holding to a form of godliness although they have denied its power” (2 Timothy 3:2-5).

The tyranny of Louis XVI and Marie-Antoinette was answered by the guillotine. Destiny condemned the tyranny of Hitler, the elected members of the Reichstag congress, and the Secretaries of the Third Reich.
All politicians, who view themselves as the “Rulers” over the “Ruled,” will face the inescapable recycling “mill of Justice that grinds slowly, but grinds finely.” These will face a wrath from a righteous populace. That wrath is stoked by the politician’s evil deeds and just punishment will be meted by those who have been wronged!

This fate is recycled history. Politicians can claim “misrepresentation.” They can manipulate the thinking of the people by propaganda’s lies. They can shroud themselves in deniability. They can weaponize government resources to punish their critics. But, they will NOT escape! These will find themselves in the recycled garbage heap of civilization’s failed governing. No matter how important they think they are “they are soon forgotten in the city where they did thus”!

To the current Congress of the United States of America…Will you learn and change your course in legislating the affairs of our nation so you will avoid the coming wrath of those you oppressed? Will you continue to view yourselves as the “Rulers” arrogantly tyrannizing those you view as “the Ruled”? Are you aware of the humiliating history that is chronicling your choice?