John Kachelman, Jr.: The Reality and Requisite of a National Thanksgiving 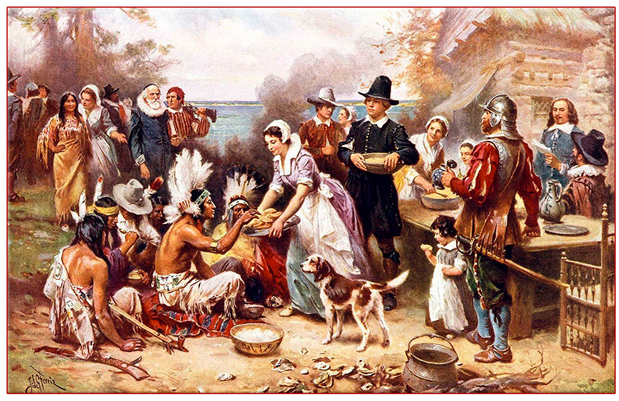 The fourth Thursday in November is my favorite day of the year. It is “Thanksgiving Day.” Ironically my favorite day of the year follows my least favorite day (Halloween). Thanksgiving Day celebrates the heartfelt and happy acknowledgment that the Almighty God has providentially blessed us. Halloween celebrates all that is evil, selfish and ungodly. These two calendar events frame the constant battle in civilization’s history. I prefer the celebration of good rather than the celebration of evil.

One has well asked, “Why is it that mankind chooses to celebrate thanksgiving to the Almighty only on one day, and focus on gripes, grumbles, and complaints the remaining 364 days?” The answer to this query is an indictment of society—mankind is more concerned with Self than with the Almighty God.

The practical consequence of erasing God is an embracing of socialism. Socialism advocates that the communal thought is the source of all power; the State is the ultimate arbitrator in even the most personal choices. One is thankful to the Sate because God is erased. Such an ungodly position ultimately leads to blind submission: “The State knows better how to spend the private citizen’s money than the private citizens.” Or, “The State knows better what your children need to learn.” Or, “The State knows better how to raise your children—it takes a village to raise a child because parents cannot raise their own children!” This is a power struggle—the power of evil seeks to erase the power of good.

However, there is a major problem in the socialistic erasure of the Almighty God. The prophet summarizes this issue as he describes the socio-religious conditions of his day, “There is oath-taking, denial, murder, stealing, and adultery. They employ violence, so that bloodshed follows bloodshed. Therefore, the land mourns, and everyone who lives in it languishes along with the animals of the field and the birds of the sky, and even the fish of the sea disappear.” And what is the cause of this catastrophic environment. “For there is no faithfulness, nor loyalty, nor knowledge of God in the land” (Hosea 4:1-3).

The conscience and strength of our nation is being dismantled brick by brick. The deconstruction of our nation has already removed much of our heritage that made us a world power. The heroes have been painted as the villains and the personalities that have fueled hate and instigated anger are memorialized as “saints” and recently even as the Christ!

Reliance on God’s providence was a hallmark of the early colonists but is a never taught historical fact in our schools. God’s providence is a blasphemous belief according to our politically correct speech. God’s providence is a faded memory in the minds of older Americans. The Judeo-Christian foundation of our morality, governing, and freedoms are being attacked and removed piece by piece. We have lost so much of our national conscience that Hosea’s characterization of his society reads like today’s news briefs.

Our nation has long been in an ideological war. Many dismissed the surrender of freedoms and the encroaching governmental “mandates” as inconsequential. But, ideas have consequences. When ungodly, uncivil ideas are permitted unrestricted advocacy, they become a cancer that metastases and brings ruin to every part of society.

Our national day of “Thanksgiving” brings an uncomfortable focus to this war. Two striking points are considered as illustrative of those intent on dismantling our great Republic who attack Thanksgiving Day.
First there is an effort to rewrite history so the Pilgrim’s first Thanksgiving becomes a myth. Illustrating this are a number of articles from those claiming to have “discovered the truth” regarding the Thanksgiving Holiday celebrated in the USA.

Our educational centers are teaching the “inventing” of Thanksgiving. The holiday is purported to be founded upon a legend. Here is one of many such propaganda pieces deconstructing our national heritage, revising our history and contorting truth. All is an effort to erase the Almighty God and encourage the State’s surrender to socialism.

“The legend of the American Thanksgiving holiday is said to have been based on a feast of thanksgiving in the early days of the American colonies almost 400 years ago. The tale as it is told in grade schools is a legend, a mythologized version that downplays some of the bleaker history of how Thanksgiving became an American national holiday…The holiday continued…not with a feast and family, but rather with rowdy drunken men who went door to door begging for treats. That’s how many of the original American holidays were celebrated: Christmas, New Year’s Eve and Day, Washington’s birthday, the 4th of July…By the mid-18th century, the rowdy behavior had become a carnivalesque misrule that was closer to what we think of as Halloween or Mardi Gras today. An established mummer’s parade made up of cross-dressing men, known as the Fantasticals, began by the 1780s: it was considered a more acceptable behavior than the drunken rowdiness. It could be said that these two institutions are still part of Thanksgiving Day celebrations: rowdy men (Thanksgiving Day football games, established in 1876), and elaborate mummer parades (Macy’s Parade, established in 1924).”

In stark contrast to the idiocy of the revisionist’s attempts to rewrite facts regarding documented facts, we note this historical account: “In 1621, the Plymouth colonists and the Wampanoag shared an autumn harvest feast that is acknowledged today as one of the first Thanksgiving celebrations in the colonies…In September 1620, a small ship called the Mayflower left Plymouth, England, carrying 102 passengers—an assortment of religious separatists seeking a new home where they could freely practice their faith…Only half of the Mayflower’s original passengers and crew lived to see their first New England spring. In March, the remaining settlers moved ashore, where they received an astonishing visit from a member of the Abenaki tribe who greeted them in English. Several days later, he returned with another Native American, Squanto, a member of the Pawtuxet tribe…Squanto taught the Pilgrims how to cultivate corn, extract sap from maple trees, catch fish in the rivers and avoid poisonous plants. He also helped the settlers forge an alliance with the Wampanoag, a local tribe, which would endure for more than 50 years…In November 1621, after the Pilgrims’ first corn harvest proved successful, Governor William Bradford organized a celebratory feast and invited a group of the fledgling colony’s Native American allies, including the Wampanoag chief Massasoit. Now remembered as American’s “first Thanksgiving.”

Much of what we know about what happened at the first Thanksgiving comes from Pilgrim chronicler Edward Winslow, who wrote: “Our harvest being gotten in…we might after a special manner rejoice together, after we had gathered the fruits of our labors…many of the Indians coming amongst us, and amongst the rest their greatest king Massasoit, with some ninety men, whom for three days we entertained and feasted…And although it be not always so plentiful, as it was at this time with us, yet by the goodness of God, we are so far from want.”

The second point focuses upon how the real Thanksgiving Day celebration demolishes the socialistic onslaught of our free entrepreneurial economy. This point is often eclipsed by the feast shared between the Pilgrims and the Native Americans, but it should be strongly emphasized today.

The first Thanksgiving exposes socialism as bereft of any value culturally, morally, civically, economically, and religiously! Any way one looks at socialism it is worthless—except to the elite who become richer and more aloof!

Let me suggest that you read several articles published in Forbes Magazine by Jerry Bowyer. Bowyer’s discussion on the real significance of Thanksgiving is rarely heard. His opening sentences read: “It’s wrong to say that American was founded by capitalists. In fact, America was founded by socialists who had the humility to learn from their initial mistakes and embrace freedom.”

Bowyer, in another article, exposes the emptiness of socialism’s promises. Socialism never produces abundance, energy, expansion, and improvements. As Bowyer notes, “I explained that the first Thanksgiving was a celebration of abundance after a period of socialism and starvation…Their Thanksgiving celebrated the triumph of the individual, private property, and incentive, over collectivism…For them, God, not Plato, knew best. Accepting the principles of private property and self-interest was God’s way of harnessing self-interest to the greater good. We know all of this because an elder and Governor of the Plymouth plantation, William Bradford, kept a journal and it survives today.”

I appreciate such insight!

Thanksgiving Day is exceptional in many ways but these two points add emphasis to the reality of such a day celebrated in history and its requisite to a national ideology that succeeds by a bold individualism and a contained and controlled central governing!

The Bible says, “Blessed is the nation whose God is the Lord” (Psalm 33:12). Perhaps we should add the thought “and whose citizenry remains thankful for the divine blessings.” The Bible says in Deuteronomy 28 that if we honor and obey God, we will enjoy blessings. If a nation dishonors and disobeys Him, it will reap curses (as Hosea observed).

I well remember the truisms once stressed by our political leaders: “If we ever forget that we are One Nation Under God, then we will be a nation gone under.” And, “Once a nation removes God from its conscience, it becomes a god-less nation.”

This is the reality and requisite of our Thanksgiving Day!