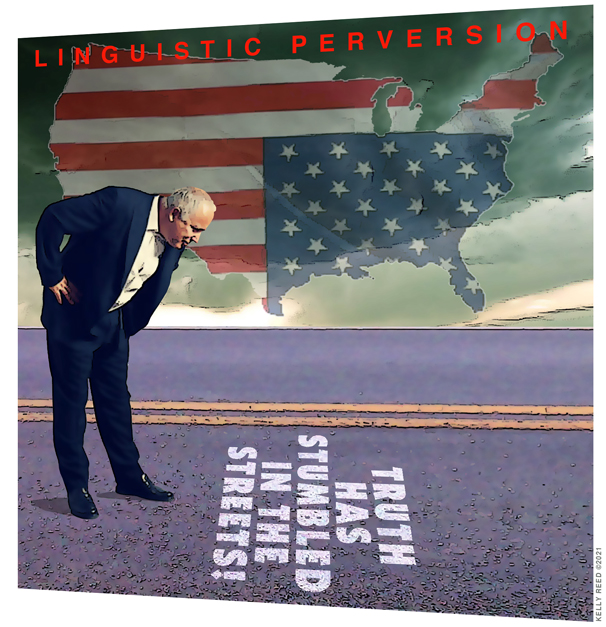 “You can change the course of your life with your words.”

“The invisible hand of language change (structurally-motivated change) can create an environment for change, which is then helped along by a certain social group adopting that change, and using it as a social marker.”

Language is one of the most critical elements of civilization. Language defines the mores that restrict civil boundaries and enables peaceable existence. Language is an incredible art that can define heroism and instill resolve but can also instigate hatred and insurrection.

The American language has been hijacked, manipulated, tortured and twisted to support perversion of basic civilities and morality. Our language has become “plastic” in today’s upside-down culture. Previous vocabulary is now used to communicate the opposite concepts than in the past. The ancient prophet reveals this is not a modern phenomenon. “Woe to those who call evil good, and good evil; Who substitute darkness for light and light for darkness; Who substitute bitter for sweet and sweet for bitter!” (Isaiah).

Historical anecdotes abound showing how a twisted language misdirected, misled and manipulated a population to unimagined actions. A manipulated language has led many nations to a destructive cycle. The troubling consequences of a national vocabulary that leads to deprivation, manipulation and erasure is aptly stated, “My people have exchanged their glory for that which is of no benefit” (Jeremiah).

I grew up in the heyday of the Russian propaganda machine. There were two major sources of Russian State approved news. There was “Pravda” (Правда, which means “Truth”—hence the subtle message was that only those in the State could tell you the “truth”). The other publication was “Izvestia” (Известия, meaning “The News”—only the approved State releases presents the real news). A number of other publications attempted to publish, but the totalitarian Marxist censors quickly isolated and terminated these sources because they threatened the State’s control. In that era, America was incensed that such blatant censorship was practiced and urged political forces to address and punish such inhumanity. And at times we were on the precipice of WWIII.

Those involved in analyzing the USSR’s evil, found Pravada and Izvestia very informative as a means of mining discovery of the Soviet tyranny, activity and influence. The Soviet media language was crafted to frame the State as the total source of truth and all opposition as anarchists and troublers.

Evil is relentless in manipulating mankind with a twisted vocabulary that directs populations into paths that surrender their personal freedom.

This is why “freedom of speech” was a foremost concern of our Founding Fathers. However, this priority has become subservient in the agenda of the Elite Rulers in our nation. Two examples highlight this subtle attack upon our freedom. My focus is on two of the CDC’s edicts that are being viewed as binding legislative rules.

The first manipulation of free speech—MASKING. The futility of this has been discussed often but the modern editors of Pravada USA and Izvestia USA have decided the opposition must be silenced. Masking (aka “face diapers”) has been opposed with TRUE science for at least the past 12 months. New studies have only verified that the CDC/NIH mandates are useless regarding the COVID-19 virus. But the CDC has released a new advisory update on masking at schools of 2021. “Updated to recommend universal indoor masking for all students, staff, teachers, and visitors to K-12 schools, regardless of vaccination status.”

Welcome to Pravada USA and Izvestia USA where TRUE science is cursed and the “new” scientific method is embraced—conclusion and warnings can be issued with the cavalier whim of the Director…no lengthy studies, no verifiable test group, no consistent results. All is decided in a state of flux. “Science,” in the COVID19 environment, is unstable and its counsel is undependable. The BEST that CDC/NIH offers are generally phrased comments: “regardless of vaccination status,” “a negative may not be a true negative and a positive may not be a true positive”! Now citizens are told to have absolute, unquestioned confidence that these people know what they are doing—a manipulative vocabulary! And so, we are told “up is down and down is up” and we are not to question this!

The second manipulation of free speech is the CDC’s “proper-speak.” The CDC Director has arrogantly published an update on “Preferred Terms for Select Population Groups & Communities.” The Gateway Pundit highlighted this egregious mandate. This is an astonishing manipulation of our language. It redefines and perverts basic the language vocabulary that we have used for centuries. This is the Postmodern “doublespeak” used by Progressives to destroy our Republic’s foundations.

This is a blatant attack on our culture, civility and morality. It embraces an inclusive vocabulary that tolerates everything except exceptionalism!

This is a plagiarized ploy straight out of the Engles/Marx playbook. These “tolerant despicables” theorized that “class distinction” is the inherent evil that has prevent mankind’s true happiness. They presented a scheme to destroy current civility and then, from the debris, build a better civilization of equity and fairness. You should remember this from your Ninth Grade Civics classes!

This is an overreach by the CDC that seeks to instill and validate Marxist mandates in the USA. Look at how the CDC has assumed the role of totalitarianism. The CDC has placed itself as the foremost economic authority (forbidding evictions), and as the only authority regarding the insidious and tyrannical COVID-19 mandates. And now, the CDC has assumed the august position of “Language Police”! Never before in the history of our Republic has a bureaucratic office wielded such unchallenged totalitarianism—NEVER! And…the Legislative and Executive Branches have cowered before this organization and only recently has the Judicial Branch appeared to challenge this unconstitutional action by ruling in regard to the CDC’s eviction ban.

An interesting article Illustrating Engles/Marxist manipulation of language is found in the June 20, July 4, and August 2, 1950 issues of Pravda, Marxism and Problems of Linguistics, by J.V. Stalin (Foreign Languages Publishing House, Moscow). The Marxist objective is to use the current language but subtly manipulate it so old meanings are destroyed as it morphs into a new meaning. By changing the language, one compromises those opposed and speaking out against the Marxist “classless dream.”

J.V. Stalin’s article (written in 1950 during the peak of Soviet Power) provides insight to the Marxist cunning  to destroy the old cultural/political mores and introduce the new fundamental, inclusive mores. The author comments,

“(T)he Russian language has remained basically what it was before the October Revolution. What has changed in the Russian language in this period? To a certain extent the vocabulary of the Russian language has changed, in the sense that it has been replenished with a considerable number of new words and expressions, which have arisen in connection with the rise of the new socialist production…a number of words and expressions have changed their meaning, have acquired a new signification…(language) becomes an exceedingly active force, actively assisting its base to take shape and consolidate itself, and doing its utmost to help the new system to finish off and eliminate the old base and the old classes.

“What can be the necessity for a linguistic revolution, if it has been demonstrated that the existing language and its structure are fundamentally quite suited to the needs of the new system? The old superstructure can and should be destroyed and replaced by a new one in the course of a few years, in order to give free scope for the development of the productive forces of society; but how can an existing language be destroyed and a new one built in its place in the course of a few years without causing anarchy in social life and without creating the threat of the disintegration of society? Who but a Don Quixote could set himself such a task?”

Please do not allow the metaphorical reference to “Don Quixote” to be ignored as a comment on the delusional pursuit of Marxist seeking a “fundamental transformation” in the USA. Such an imaginative delusion leads not to the elusive utopian joy but to national disaster and destruction. Notice: This is only “an imagined delusion” IF the population is vigilant of the language manipulation! IF the population remains compliant and does nothing, then the “fundamental transformation” is successful.

This is where we are today…

Welcome to Pravada USA and Izvestia USA! The MSM sources arrogantly announce they have the “balanced truth,” the “total reporting,” and the “accurate analysis” of the news that Americans must read. Those opposed to the State’s version of truth and news are ignored, castigated, demonetized, blocked, banned, and litigated by a perverted justice. With such a manipulation of history once again the announcement is repeated, “Truth has stumbled in the streets.”

Perhaps the saddest point of this analysis is the impact this has upon the nation’s children. They are being schooled by this manipulative vocabulary. They are being conditioned to accept the surrender of personal freedom. They are being trained to cower before tyranny’s mandates.

This is history redux…an ancient nation surrendered prestige and freedom thinking they were benefitting. But they lost their distinctiveness. A prominent feature of any national demise is its compromised vocabulary. “As for their children, half spoke in the language of Ashdod, and none of them knew how to speak the language of Judah, but only the language of his own people.”

It is tragic that many of our population no longer know the vocabulary of our nation’s great documents and have accepted a linguistic manipulation. It is amazing that many now believe that “up is down and down is up.”

We are in a tragic historical cycle—fear rules because truth has stumbled in the streets!