Bill Lockwood: How Did We Become a Socialist Nation? 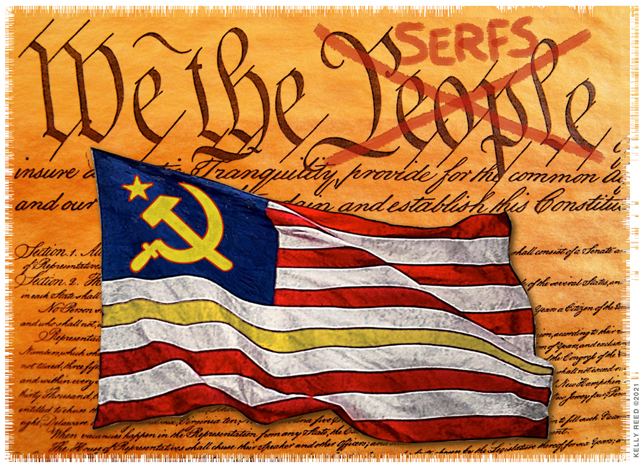 It is shocking, but true. America is already a socialist nation—for the most part. All the earmarks of socialism are incorporated into our society. From the globalist socialist United Nations controlling our shameful foreign policy machine to Big Tech monitoring and censoring free speech to confiscatory taxation—America has fallen very low on the freedom scale.

Frederich Hayek wrote that the definition of socialism has come to mean income redistribution in pursuit of “equality”, not through government ownership of the means of production, but through the institutions of the welfare state and the “progressive” income tax. As America is discovering, this is all so much poison for a society.

The shift began to occur particularly during the Woodrow Wilson administration, then was put on steroids during the Franklin Roosevelt (FDR) and Lyndon Johnson (LBJ) period. “It was under FDR that the Bill of Rights suffered a severe, and potentially lethal, mutilation that has progressively (double entendre intended) weakened it ever since. FDR attempted to redefine rights, asserting that every American has a ‘right to a useful and remunerative job,’ ‘a decent home,’ ‘adequate medical care,’ ‘a good education,’ and so on.”

A visitor to the FDR memorial in Washington, D.C. will be treated to this Orwellian redefinition of rights: “Freedom of Speech, Freedom of Worship, Freedom from Want, Freedom from Fear.” Note the shift.

According to the Founders, rights were natural rights bestowed by God and merely protected by the government. Government did not grant any right. This is emphatically clear in our own founding documents. The Ninth Amendment to the Constitution of the United States formally states that the people retain all rights absent specific enumeration in the Bill of Rights.  In other words, God gave us rights and we only ceded a certain enumerated few to the government in order for more protection of them. But make no mistake, said the founders, if we have overlooked some of these rights in our enumeration, the people still owned those also!

Franklin Roosevelt deceptively changed all of that. Freedom of speech, for example, is far different than freedom from want. The only way one can be free from “want” (housing, food, medical treatment) is to forcibly redistribute what one segment of society produces and give it to another. But for government to forcibly redistribute actually means that it forcibly removes my personal production to meet the personal needs of others. This is not freedom. This is slavery, to one degree or another.

Now, decades later, we cannot seem to escape the clutch of this wicked socialism. The only debate seems to be how much or how little money we can unconstitutionally steal from one portion of society to give to another. Or, how much can we confiscate from our own citizens to give to foreign countries. This is to bribe them with liberal Marxist ideals such as “women’s studies” in Muslim countries or to put pressure on foreign nations to recognize homosexuality as a legitimate lifestyle. We are in the clutches of socialism.