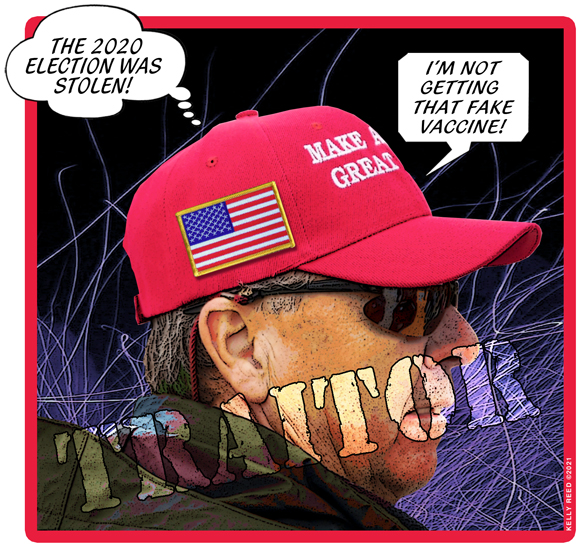 Americans opposed to COVID lockdowns and other government edicts supposedly related to the virus, as well as the “extremists” who believe the 2020 election was rigged, are at the top of the list of potential terror threats to the United States, according to a new advisory issued by the Biden administration’s Department of Homeland Security. “Conspiracy theorists” and purveyors of what the feds consider “disinformation” are now firmly in the crosshairs.

Summary of Terrorism Threat to the U.S. Homeland

The Secretary of Homeland Security has issued a new National Terrorism Advisory System (NTAS) Bulletin regarding the current heightened threat environment across the United States.  The Homeland continues to face a diverse and challenging threat environment leading up to and following the 20th Anniversary of the September 11, 2001 attacks as well religious holidays we assess could serve as a catalyst for acts of targeted violence. These threats include those posed by domestic terrorists, individuals and groups engaged in grievance-based violence, and those inspired or motivated by foreign terrorists and other malign foreign influences. These actors are increasingly exploiting online forums to influence and spread violent extremist narratives and promote violent activity. Such threats are also exacerbated by impacts of the ongoing global pandemic, including grievances over public health safety measures and perceived government restrictions.

How We Are Responding

How You Can Help

Be Prepared and Stay Informed

If You See Something, Say Something®. Report suspicious activity to local law enforcement or call 911.

The National Terrorism Advisory System provides Americans with alert information on homeland security threats. It is distributed by the Department of Homeland Security. More information is available at: www.dhs.gov/advisories. To receive mobile updates: twitter.com/dhsgov

If You See Something Say Something® used with permission of the NY Metropolitan Transportation Authority.

“Extremists may seek to exploit the emergence of COVID-19 variants by viewing the potential re-establishment of public health restrictions across the US as a rationale to conduct attacks,” Homeland Security bureaucrats claimed in the bulletin, acknowledging that there is no specific threat or credible information that it knows about suggesting that anyone is actually planning anything.

Also under scrutiny are those Americans suspicious about the 2020 election — a number that polls suggest includes a majority of Americans and an overwhelming supermajority of Republicans. The mostly peaceful protest on January 6 at the U.S. Capitol, which Democrats and their media allies continue falsely referring to as an “insurrection” despite nobody having been charged with anything resembling insurrection, is key to the narrative. There was no mention about growing suspicions of FBI involvement in the January 6 incident.

“These actors are increasingly exploiting online forums to influence and spread violent extremist narratives and promote violent activity,” Biden’s “Homeland Security” bureaucrats claimed without giving any examples of anyone promoting violent activity. “Such threats are also exacerbated by impacts of the ongoing global pandemic, including grievances over public health safety measures and perceived government restrictions.”

Speaking to NBC News, which helped amplify the government’s propaganda against Americans, federal spokesmen echoed those claims. “DHS has seen an increasing but modest level of individuals calling for violence in response to the unsubstantiated claims of fraud related to the 2020 election fraud and the alleged ‘reinstatement’ of former President Trump,” the DHS spokesman was was quoted as saying by NBC News, adding that the concerns are becoming more mainstream.

Tackling so-called “thought crimes” is becoming a central element of the administration’s supposed effort to prevent terror. “DHS is focused on the nexus between violence and extremist ideologies,” a spokesman for the agency was quoted as saying, with “extremist ideologies” being essentially any ideologies the Biden administration disagrees with including ideas such as the U.S. Constitution and resistance to COVID tyranny.

The warnings about the alleged threat of conspiracy theorists, civil libertarians and election-integrity advocates came shortly after the FBI came under fire for urging Americans to spy on and report their own family members for “extremist” views. Critics blasted the cryptic call as a throwback to the barbarous Stasi in Communist-ruled East Germany, which encouraged citizens to constantly surveil and report each other to the murderous regime.

While again acknowledging that they have no specific information about any specific alleged threat, Homeland Security claimed that the U.S. government was not “prepared” for the January 6 incident because it did not spy on Americans closely enough. And so, DHS “leaders” cited by NBC vowed to more closely monitor social media and especially “extremist rhetoric.” DHS is also reportedly working with local law-enforcement agencies on the issue.

“We are currently in a heightened terrorism-related threat environment, and DHS is aware of previous instances of violence associated with the dissemination of disinformation, false narratives and conspiracy theories about the 2020 election,” the DHS spokesman said, dismissing widespread and well-founded public concerns over election integrity as “disinformation” and “conspiracy theories.”

In general, though, the government claims to believe that threats from everyday Americans are lurking everywhere, except among the left-wing extremists burning down U.S. cities and attacking police. “Pandemic-related stressors have contributed to increased societal strains and tensions, driving several plots by domestic violent extremists, and they may contribute to more violence this year,” the DHS claimed.

Unspecified “religious holidays” may also trigger terror attacks, the Biden administration said. The United States “continues to face a diverse and challenging threat environment leading up to and following the 20th Anniversary of the September 11, 2001 attacks as well religious holidays we assess could serve as a catalyst for acts of targeted violence,” the DHS bulletin argued.

After repeatedly emphasizing that conservative and liberty-minded Americans are the main supposed terror threat to America, the administration reluctantly acknowledged supposed foreign threats, too. “These threats include those posed by domestic terrorists, individuals and groups engaged in grievance-based violence, and those inspired or motivated by foreign terrorists and other malign foreign influences,” the bulletin claimed.

There were no warnings issued about domestic terror groups such as Antifa or Black Lives Matter. The two communist organizations, which have numerous links to hostile foreign regimes and organizations, destroyed billions in property and were responsible for numerous deaths last year in violent riots that swept across major cities nationwide. Even RINOs (Republicans In Name Only) in Congress such as Senator Chuck Grassley of Iowa said it was a “grave mistake” for the administration to ignore those threats.

Meanwhile, despite the supposed concerns about terror and national security, the Southern border with Mexico overseen by the same federal agency remains wide open. Because of that, actual terrorists with dangerous intent have been waltzing across the border into the “Homeland” practically uninterrupted on a regular basis.

Consider the recent arrest of two Yemeni men on the government’s no-fly and FBI terrorist watch lists who were arrested while illegally crossing the border from Mexico in January and March. According to U.S. Border Patrol officials, over a thousand illegal aliens each day walk across the border and are not even pursued because agents are so busy taking care of the growing tsunami of children showing up at the border.

Ironically, even as the administration works to stoke public fears about alleged domestic terror plots, it is vowing to re-settle tens of thousands of Afghans in the United States after the disastrous Biden withdrawal. Security and terror experts say that leaves the door wide open for would-be terrorist infiltrators to be plopped into local communities nationwide at taxpayer expense.

Of course, legitimate counter-terrorism experts focused on actual terror threats to the United States were purged from federal service during the Obama administration — especially those who knew that jihadists and violent communists such as Antifa posed the most significant domestic terror threat to America’s national security.

The expertise and training programs developed by actual experts were replaced with discredited “countering violent extremism” (CVE) nonsense focusing on the largely imaginary threat of “white supremacists.” Critics say that is how the FBI and other agencies missed obvious warning signs and clues about the Boston Marathon attack, the Orlando nightclub massacre, the San Bernadino slaughter, and other jihadist terror attacks.

Now, as The New American has been warning for decades, the end goal is coming into view more clearly: Turning the massive federal intelligence and law-enforcement apparatus against mainstream Americans concerned about the lawlessness coming out of the federal government. If the scheming is not checked by Congress and state governments, the administration fully intends to further weaponize the power of the federal government against its own citizens.

In a widely criticized document entitled National Strategy for Countering Domestic Terrorism, the administration made clear that it is not just violence that is at issue — but ideas and thoughts that supposedly might possibly lead a person to commit a violent act. And it will not just be the federal government involved.

“Preventing domestic terrorism and reducing the factors that fuel it demand a multifaceted response across the Federal Government and beyond,” Biden says in an introduction to the National Strategy document. “That includes working with our critical partners in state, local, tribal, and territorial governments and in civil society, the private sector, academia, and local communities, as well as with our allies and foreign partners.”

But of course, only some ideas that might lead to violence are actually in the crosshairs. For example, consider that the admitted terrorist Floyd Corkins told the FBI that he was inspired to commit terrorism and mass-murder against conservatives and Christians by the far-left hate group known as the Southern Poverty Law Center. And yet, instead of targeting the radical ideology of the SPLC, the feds work with the discredited organization to target mainstream Americans.

Ironically, perhaps, the mass-murdering dictatorship ruling mainland China sounded a lot like the Biden administration in its demonization of those who reject total government power under the guise of keeping people safe from COVID.

For instance, through its mouthpiece Global Times, the Chinese Communist Party used an article about the terror alert to blast “loopholes” in the Constitution’s “federal system” that have “restricted” the power of the federal government when “encountering a crisis.” Some states, the regime said, are “reluctant to do the right thing to combat the epidemic.” Part of the problem is that “Americans advocate individualism,” the CCP said, slamming opposition to mask mandates, vaccine mandates, and travel restrictions.

With each day that passes, it is becoming more and more clear that the U.S. government — using rhetoric and talking points almost identical to those of the murderous Chinese Communist Party — is being weaponized against Americans and freedom. The outlandish new “terror” warning painting tens of millions of mainstream Americans with legitimate concerns about individual liberty and election fraud as terrorists should be a wake-up call to all.