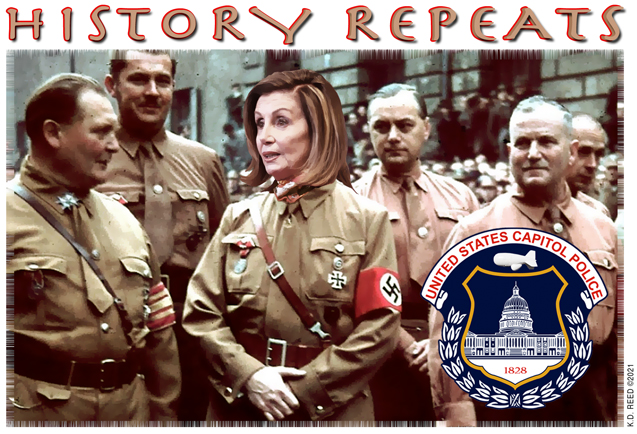 The Los Angeles Times reported last week that “The U.S. Capitol Police on Tuesday announced that the agency was opening regional field offices in California and Florida to investigate threats to members of Congress in the wake of the Jan. 6 attack on the Capitol.”

Ostensibly, the reason is that “threats against members of Congress have increased in recent years. As of Tuesday, total threats so far in 2021 were double what they were at this point a year ago.”

This seizure of States’ Rights by the Federal Government is shocking to those who are unaware of what is happening in our nation; it has been expected for those who have followed the trend of Marxism/Socialism that has enveloped our nation. This amounts to a Democratic SS Force—a National Police Force.

John Kachelman, Jr. has pointed out  that “according to announcements, [Nancy] Pelosi will assign the Capitol Police to various ‘hot spots’ throughout our nation” for the “purpose of confronting those deemed ‘radical extremists.’ Informed readers know this is a term identifying those who believe in the Constitution and not the extremists residing in Washington, DC” who flagrantly abuse the “rule of law.”

According to the Marxist playbook, followed by Hitler and other socialists, this is just the beginning. The foot in the door for totalitarian control.

John Adams, the second president of the United States and signer of both the Declaration of Independence and the Constitution itself, in an 1813 letter to Thomas Jefferson, reflected upon the entire course of American history.

America has been great because America was founded upon the bedrock principles of Christianity. Other founders could be quoted to the same effect. Those principles include the sacredness of human life, of personal liberty, and personal property.

It was precisely because of these pillars of freedom that America created a limited federal government—the Constitutional system. It is an incontrovertible fact that this system was specifically designed to allow power to flow from the bottom up; from the people to their representatives of government. Weaker at the top; stronger at the bottom. It is also a fact that every other national government is designed from the top down wherein bureaucrats control nearly every aspect of citizen’s lives.

One of the hallmarks of this bottom up Constitutional system is the local police department. Law enforcement in local areas is not to be controlled by politicians at the top.

Art Thompson, the CEO of the John Birch Society, says it best:

Actually, the United States is one of the last countries, if not the last, to have widespread local police power instead of types of national systems that exist elsewhere. No country can become totalitarian as long as the local citizens have direct responsibility for and control of local police departments. It is one of our essential checks and balances.

There are those who want to change our American system into something resembling the rest of the world. In the process, they want to remove responsibility from the citizens and the ability of the local police departments to answer to the local citizens through their city government, becoming nothing more than units in a national police force.

Through the years various conservatives have warned of the desire and move of the leftist in America to “nationalize” our police force, or at least assert “national” control over local law enforcement. By means of the liberal media police have been demonized ever since the 1960’s where they were called upon to quash communist-funded hippie rebellions. Unfortunately, those communists are now in power, represented a few years ago by Barack Obama.

Obama sought to create a national police force, utilizing FEMA corps of the DHS. Millions of rounds of ammunition were bought by the federal government.  More ominous still was Obama’s 2008 statement while running for office. “We cannot continue to rely on our military in order to achieve he national security objectives that we’ve set. We’ve got to have a civilian national security force that’s just as powerful, just as strong, just as well-funded.”