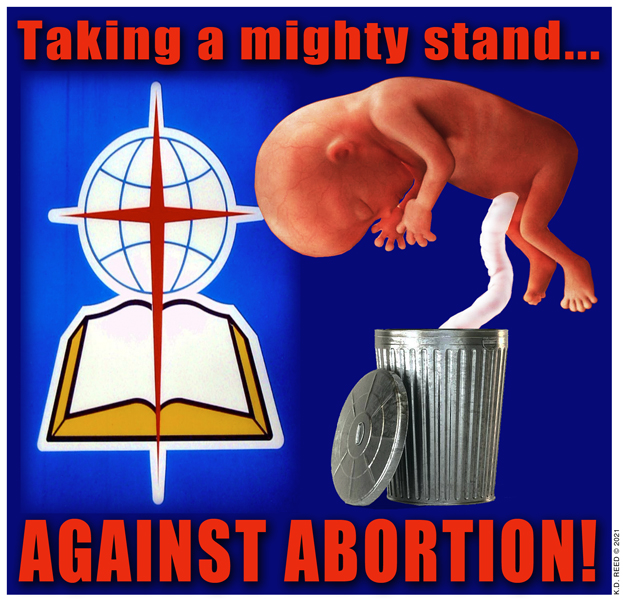 Abortion is murder and represents a “crime against humanity,” so it must be immediately re-criminalized and abolished without any exceptions, according to a resolution approved earlier this month by the powerful Southern Baptist Convention (SBC).

The new measure, which rejected the “incremental approach” to stopping the slaughter of the unborn favored by many “pro-life” activists, also called on Christians and governments to repent for their complicity in the ongoing atrocities.

The move even calls for state nullification if needed. And it has the potential to supercharge the movement to stop the massacre of pre-born children taking place in America.

The SBC has been issuing tepid resolutions against abortion since before the U.S. Supreme Court even authored its opinion in Roe v. Wade. That decision purporting to overturn all state laws banning the murder of unborn babies has facilitated the slaughter of some 60 million innocent human beings so far.

But the latest measure demanding “the immediate abolition of abortion without exception or compromise” by the SBC represents the most strident language yet from America’s largest Protestant Christian denomination. The SBC includes about 50,000 churches with some 15 million members.

Despite the lack of attention from the establishment press, the resolution is already sending shock-waves through the church. Many analysts believe it represents a turning point in the battle to stop abortion.

“The bloody stain that comes from the more than sixty million babies who have been legally put to death belongs in part to Southern Baptists for their ethical failures to speak clearly, prophetically and consistently on the sanctity of the life of preborn humans,” explained Pastor Tom Ascol of Founders Ministry, one of the key forces behind the measure, in a post about it on his website.

“It is time for Southern Baptists to repent of their complicity in searing the conscience of a nation that has yet to cease the slaughter of unborn innocents,” he added.

According to numerous scripture verses cited in the resolution, all human beings are “created in God’s image” from the moment of fertilization. That means, as God’s image-bearers, each baby in the womb is equal in value to God, regardless of the baby’s age, ethnicity, size, gender, and so on.

As such, murdering any preborn baby “is a sin, violating both the natural law of retributive justice as set forth in the Noahic covenant, as well as the sixth commandment forbidding murder.” It is also an “assault on God’s image” and an effort to “usurp God’s sovereignty as Creator,” the resolution declares.

Again citing the Bible, the resolution goes on to argue that all human life is a “sacred gift,” and that God’s law is supreme over human life and human law. Pointing to Proverbs 24:11-12 commanding Christians to “rescue those who are being taken away to death,” as well as the fact that God will hold Christians responsible for failing to do something, the Southern Baptists said there is no choice but to get involved.

“God establishes all governing authorities as His avenging servants to carry out His wrath on the evildoer,” the resolution continues, noting that government authorities have an obligation to judge justly when punishing evil.

The document, approved on June 16 in Nashville at the SBC’s annual meeting, also brought in the U.S. Constitution. “In 1973, the Supreme Court of the United States rendered an iniquitous decision on Roe v. Wade, and in doing so deprived the innocent of their rights, and usurped God, who sovereignly ordained their authority,” the SBC said.

In its decision, “the Supreme Court of the United States subverted the U.S. Constitution namely, the Preamble, as well as the Fifth and Fourteenth Amendments without any legal authority (Article 6, Clause 2 ‘Supremacy Clause’),” the resolution continued, pointing to the fact that only constitutional laws are permissible and supreme over state laws.

In other words, government authorities at all levels have a duty under the laws of God and under the U.S. Constitution to protect unborn babies. That means, if necessary, state and local governments have a duty to intervene, even if they have to ignore and nullify illegitimate federal usurpations such as Roe v. Wade.

Indeed, governing authorities have not just a constitutional obligation to act, but “a duty before God” to uphold justice by protecting the unborn, regardless of what the high court says in its opinions.

In what will sound bizarre to some seeking to protect unborn babies, the measure goes on to criticize the pro-life movement and its efforts.

“Over the past 48 years with 60+ million abortions, traditional Pro-life laws, though well intended, have not established equal protection and justice for the preborn, but on the contrary, appallingly have established incremental, regulatory guidelines for when, where, why, and how to obtain legal abortion of innocent preborn children, thereby legally sanctioning abortion,” the measure states, calling for a new approach often dubbed “abolition” by proponents.

By approving the measure, the SBC resolved to “state unequivocally that abortion is murder.”

They also agreed to “reject any position that allows for any exceptions to the legal protection of our preborn neighbors, compromises God’s holy standard of justice, or promotes any God-hating partiality.”

Indeed, SBC messengers go on to repent of any complicity they may have had in tolerating exceptions that legitimize or regulate the murder of the unborn.

As part of the resolution, the SBC’s messengers, who represent SBC churches nationwide, vowed not to embrace any incremental approach to saving babies. Rather, abortion must be looked upon as murder, always, starting now, and appropriately punished by government.

“As Southern Baptists we will engage, with God’s help, in establishing equal justice and protection for the preborn according to the authority of God’s Word as well as local and federal law,” the measure declared, calling on pastors and leaders to get involved in abolishing abortion immediately.

“Because abolishing abortion is a Great Commission issue, we must call upon governing authorities at all levels to repent and ‘obey everything that [Christ] has commanded,’ exhorting them to bear fruit in keeping with repentance by faithfully executing their responsibilities as God’s servants of justice, and working with all urgency to enact legislation using the full weight of their office to interpose on behalf of the preborn, abolishing abortion immediately, without exception or compromise,” the resolution concluded.

The language in the historic SBC resolution goes beyond what other Protestant denominations and even the Catholic Church have taught in America. Indeed, it marks a turning point in the battle against abortion when it comes to tactics and rhetoric.

After almost 50 years of the “pro-life” movement accomplishing little as babies continued to be butchered, advocates of “abolition” have argued that new strategies and a biblical approach to the issue must be used.

One key element of the emerging abolition movement relies on Reformation-era biblical theological thinking. Especially relevant is the “Doctrine of the Lesser Magistrates,” which calls on “lesser magistrates” — governors and sheriffs in America, for example — to interpose on behalf of their constituents to protect them from evil decrees of higher magistrates. For instance, a state legislature and governor could interpose on behalf of unborn babies in the state by arresting and prosecuting those involved in murdering babies.

Also key in America are constitutional arguments. Under the U.S. Constitution, the federal government has limited powers — something the 10th Amendment makes clear when it expressly reserves all powers not delegated to the feds for the states and the people. As such, Founding Fathers including James Madison and Thomas Jefferson argued that states have a duty to nullify unconstitutional actions by the federal government.

Dozens of states have already nullified federal statutes and international treaties purporting to prohibit marijuana. Nullification of the Supreme Court opinion pretending to overturn state murder laws would be just as effective.

The state of Oklahoma has been at the forefront of the effort to nullify Roe v. Wade. Numerous abolition bills have been introduced, though none have been signed into law yet.

However, with the new SBC resolution on abolishing abortion, the tide may finally be turning, first in the Southern United States, and eventually nationwide.