Wayne Allyn Root: This Brilliant Hero Doctor Says CDC Bureaucrats and Democrat Politicians Could be Guilty of Mass Murder and Crimes Against Humanity 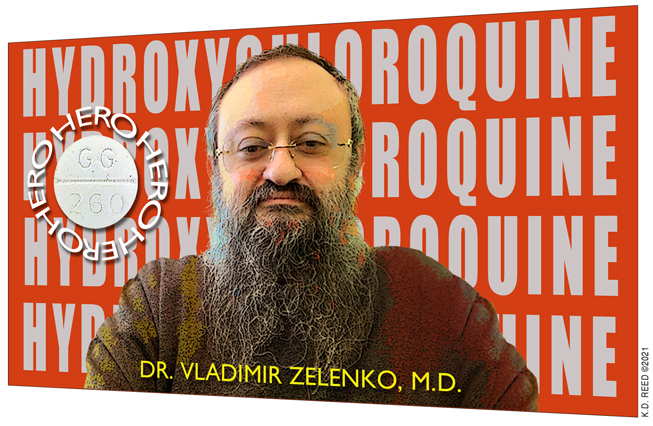 I’ve known for well over a year now that we had an effective treatment for Covid-19. Hundreds of thousands of Americans could have been saved.

I knew about this simple, safe, inexpensive treatment with remarkable results because I’ve had a dozen brilliant doctors as guests on my nationally-syndicated radio show, “Wayne Allyn Root: Raw & Unfiltered” on USA Radio Network, to talk about their success using HCQ (hydroxychloroquine) on patients sick with Covid-19.

But one stood out over all others. His name is Dr. Vladimir Zelenko, M.D. Here is an excerpt from my national newspaper column from a year ago- syndicated in July 2020 by Creators Syndicate. It was written as a plea to President Trump…

“Mr. President, this is the most important column I’ve ever written. We have a successful treatment for Covid-19. Now we need an Executive Order from you to put it into play.

This brilliant New York doctor (Dr. Vladimir Zelenko, MD) has treated 2,200 Covid-19 patients. He’s had a success rate of 100% for low-risk patients…and a success rate of 99.3% for high-risk patients from using Hydroxychloroquine, zinc sulfate, plus Z Pak antibiotic. He has named it “the Zelenko Protocol.” It’s the synergy that works. Without zinc and Z Pak, the drug hydroxychloroquine doesn’t work as effectively.

The other key to success is to use this 3-part protocol within five days of symptoms appearing. It has to be used early, before the patient winds up in the ICU. That’s why several studies of Hydroxychloroquine have failed. They never used zinc sulfate and they started the protocol too late.

Only two out of 2200 of Dr Zelenko’s patients died. Of those two, one already had cancer. The other was very old and already very ill with Covid-19 before using the protocol. By that time, it’s almost always too late.

We all need to follow Dr. Zelenko’s regimen. But we can’t. Doctors won’t prescribe the so-called “Trump drug.” Liberals, the media, the FDA, government bureaucrats- none of them want to give Trump the credit if it works. Politics is killing thousands of Americans.

If only President Trump had listened to Dr. Vladimir Zelenko, instead of Dr. Fauci, and the corrupt bureaucrats of the CDC, WHO and FDA. That was a year ago. How many hundreds of thousands of Americans have died needlessly in the past year? Isn’t this mass murder?

Have you seen the latest headlines? Multiple studies show that the use of HCQ (hydroxychloroquine) across the globe reduced death and boosted survival rates by 84%, 100% and in one study 200%. HCG really works. And that’s without what Dr. Zelenko calls “the key ingredient” (zinc sulfate). He also recommends another highly effective drug called Ivermectin.

Because of Dr. Zelenko, I’ve informed my listeners about HCQ, zinc and Ivermectin for a year now.

Yet even with all these new studies and factual evidence, YouTube just hours ago suspended US Senator Ron Johnson (R-Wisconsin) for promoting a video touting early treatment with HCQ and Ivermectin. YouTube called it “medical misinformation.”

It’s time to start asking why treatments for Covid-19 proven in multiple studies around the world to save lives, are slandered, censored and banned by social media? Who are they to ban life saving information? Who are they to label life-saving information as “medical misinformation”? What’s in it for them if thousands die needlessly? Somebody clearly is getting filthy rich on this scam.

I asked Dr. Zelenko about it on a return visit to my show only days ago. He said, “Prehospital treatment of Covid-19 was intentionally suppressed. Life-saving information and medication was intentionally suppressed…out of 600,000 dead Americans we could have saved 510,000. The American people have been brutalized and are the victims of mass murder and crimes against humanity.”

I asked Dr. Zelenko for his solution to this on-going tragedy? He said, “Number one, immediately endorse pre-hospital treatment with the Zelenko Protocol and make it the standard of care. Number two, we must bring these criminals to justice.”