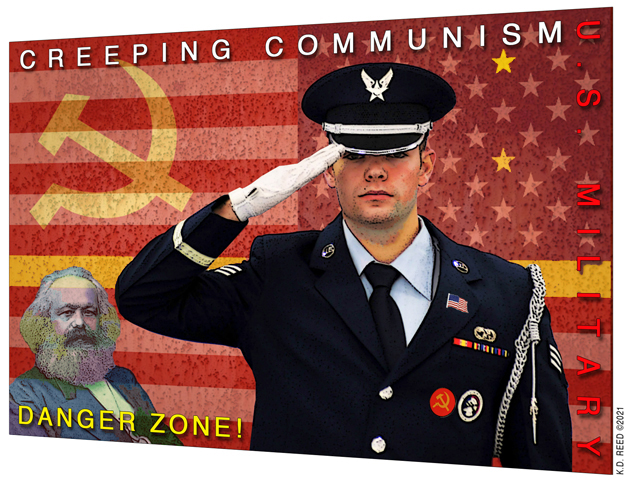 Lt. Col. Matthew Lohmeier, a former instructor and fighter pilot in the US Air Force, and until this week a commanding officer of the 11th Space Warning Squadron of the US Space Force, has just been relieved of duty for privately publishing a book that “warned of the spread of Marxism and critical race theory in the military.” Lt. Gen. Stephen Whiting, the Space Operations commander, removed Lohmeier from his position at Colorado’s Buckley AFB due to what he called “loss of trust and ability to lead.”

Lohmeier has made public comments in a podcast about Marxist ideology in the military, namely the Critical Race Theory. This runs afoul of the Marxist-leaning administration in Washington, D.C. and Defense Secretary Lloyd Austin took particular offense at the remarks.

Jen Psaki, the Press Secretary for President Biden, officially, on behalf of the administration, defended the Marxist view of history and the Critical Race Theory when she publicly defended the racist “1619 Project.”

Critical Race Theory is a re-configuring of Marxism. Karl Marx, building his system upon atheistic assumptions, constructed the political program on the “theory of class conflict” in order to create upheavals in society. These classes were the capitalists and the workers. Ensuing conflicts between them ignited the powder kegs that would shatter the status quo.

CRT is this same volatile brew of “class conflict”, but it has simply substituted race for class. This became the predominant form of Marxism beginning in the 1960’s which predominated academia.

Therefore, we hear of “white supremacy,” “equity,” “social justice,” “diversity and inclusion,” and “culturally responsive teaching.” This is all nothing less than re-formulated Marxism, or neo-Marxism.

For example, in the name of “equity,” UCLA Law professor and critical race theorist Cheryl Harris has proposed suspending private property rights, seizing land and wealth and redistributing them along racial lines. The identical model is already being practiced in South Africa where government officials already are exterminating white Afrikaners and confiscating their farms.

That this hard-core Marxism is now the dominant working theory in the FBI, Department of Homeland Security, Treasury Department, and even the MILITARY, is cause of major concern, to say the least.

Lt. Col. Matthew Lohmeier’s book is entitled Irresistible Revolution: Marxism’s Goal of Conquest & the Unmaking of the American Military. During a podcast on May 7 Lohmeier discussed his new publication. He also reflected on what is occurring in the Armed Forces.

What you see happening in the US Military at the moment is that if you’re a conservative, then you’re lumped into a group of people who are labeled extremists, if you’re will to voice your views. And if you’re aligned on the left, then its ok to be an activist online because no one’s going to hold you accountable.

“Since taking command as a commander about 10 months ago, I saw what I consider fundamentally incompatible narratives of what America was, is and should be,” Lohmeier said. “That wasn’t just prolific in social media, or throughout the country during this past year, but is spreading throughout the United States military. And I recognized those narratives as being Marxist in nature.”

The Critical Race Theory creates an “oppressor vs. oppressive” narrative and makes “race the lens through which the world is viewed.” Further, he pointed out that this “weaponizes race dialogue to cause division and contentions hoping the people would get up one another’s necks—not unified, but divided.”

Regarding Defense Secretary Lloyd Austin himself as well as the Biden Administration, Lohmeier added, “I don’t demonize the man, but I want to make it clear to both him and every service member this agenda—it will divide us. It will not unify us.” Referring to Austin, he lamented that the Defense Secretary is promoting “diversity, inclusion, and equity” which is rooted in the Critical Race Theory, “which is rooted in Marxism.”

This is too straight of a dose of medicine for our politically-correct High Command in the military, and the ruling elite in Washington, D.C. Unalloyed truth stings too much and Lohmeier was relieved of duty.

First, America is in serious trouble. When the military, once a conservative bastion, becomes a practitioner of Marxist theory, trouble will follow. The division of which Lohmeier speaks is increasingly manifested in all rungs of society. This Marxist conflict is no accident. It began in earnest during the presidency of Barack Obama, a Marxist at heart, as the country began to explode along racial lines. He also managed to excise the military of numerous conservative high-ranking officers. The purge continues under Biden.

We should not even begin to ask what would occur if America enters another foreign war, undirected by the United Nations. Democrats are too busy tearing apart the fabric of our nation with Marxism to be interested in equipping ourselves for real combat.

Will this Marxist-military be used eventually to strip Americans themselves of rights? Instead of pooh-poohing this question, perhaps look at what is currently occurring in Washington, D.C. A populace of citizens still locked out and troops still deployed.

Second, contrary to the political puppet Lt. Gen. Whiting, who relieved Lohmeier of command, it is Lohmeier himself who is the real leader here. Whiting charged that the Lt. Col. had lost the “ability to lead.”

What is real leadership?

Leadership absent courage is a farce. … not arrogance or bravado, but real courage. It takes courage to break from the norm, challenge the status quo … Courage is having the strength of conviction to do the right thing when it would just be easier to do things right.

Real leaders are not men such as Lt. Gen. Russell Honore, touted as the tobacco-spitting, cursing, Ragin’ Cajin tough guy by the MSM. All Honore does is go around spouting Marxist slogans and verbally attacking conservatives. That is easy in our Marxist climate. It is easy to bob downstream with the rest of the clueless people while belching out ugly epithets against Constitutionalists.

Real leaders are not men such as Lt. Gen Whiting, who is the blind politically-correct devotee, who is either apparently afraid of losing his own job at the Biden Administration, or has himself become a willing client of the Marxist-oriented culture that surrounds Washington, D.C. It is to be noted that Lohmeier’s criticisms and concerns have not been answered.

Real leadership goes upstream—against the current—and is unafraid to speak out against the real perils to our society. This is Lohmeier. He may have lost his job at the command post, but he has earned admiration from the common man.