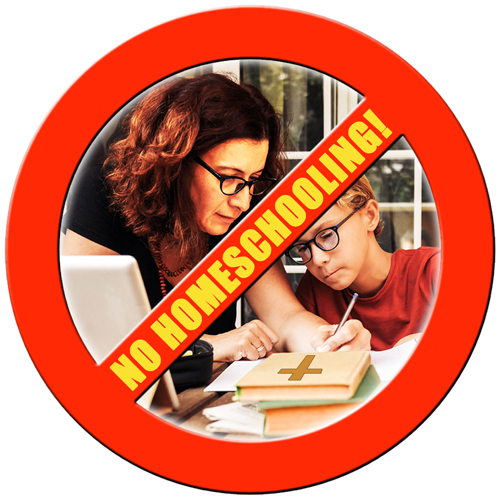 Homeschooled children have consistently and traditionally demonstrated greater academic skills that those educated in government [public] schools. Academic rigor is not only much increased, but social development as well. Little wonder, now that the government school system, controlled by gigantic leviathan bureaucratic nightmares such as the National Education Association (NEA) and its state adjuncts, are pressing to construct “politically correct” children.

During the pandemic, with government schools closed, homeschooling surged from 5.4% of households in April 2020 to 11.1% by September. This has academia worried. Elizabeth Bartholet, professor of Harvard Law School, advocates a “presumptive ban” on homeschooling. Other academics are now weighing in, showing us the direction of our overreaching government.

The Huffington Post (Jan. 15) ran a “scathing rebuke” of the Abeka Publishing and Bob Jones University Press. “Language used in the books overlaps with the rhetoric of Christian nationalism, often with overtones of nativism, militarism, and racism.” Days later, Christy Stroop, a writer for the progressive website Religion Dispatches, sounded her own alarm. People are “radicalized”, she claims, along with “white churches” in the “homeschooling movement.” Ms. Magazine charges “extremist, white supremacist” culture is being fostered in the “homeschooling movement.”

Philip Gorski, a sociology professor at Yale, tweeted this: “Christian homeschooling was—and is—often—if not always—a major vector of White Christian Nationalism.” Back to Bartholet. In an article for the Arizona Law Review, she referred to homeschooling parents’ ideological commitment to “isolating their children from the majority culture and indoctrinating them in views and values that are in serious conflict with that culture.”

Academic writings are beginning to fill up with criticisms of homeschooling as well as sarcastic references to the Bible.

As Christians, the very point of Christianity is to indoctrinate with values that are separate from the hedonistic godless culture in which we live. Bartholet notwithstanding. The only issue is, will America retain any vestige of freedom that we might be able to accomplish that? With nonsense such as “White Supremacism” thrown around—it looks like the powers that be are setting up to remove that freedom.