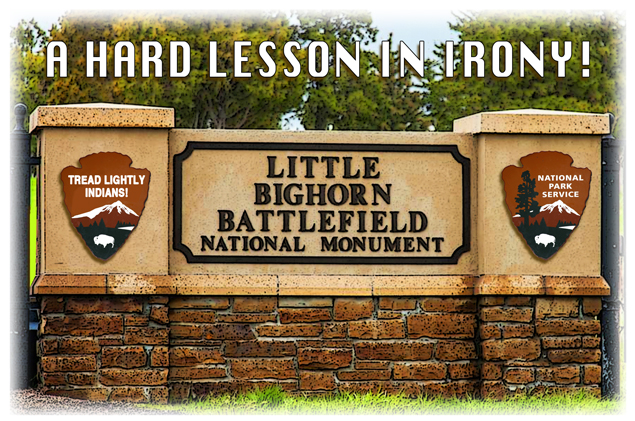 Imagine yourself being at the Custer Battlefield, MT, where Gen. George Armstrong Custer met his end in the Battle of the Little Big Horn against the Sioux and Cheyenne Indians in 1876.

As you enter the National Park you read a sign that says, “For Indians and People of Indian Descent in Particular”: (1) “Decenter yourself and come to listen, learn, mourn, and witness.” “Remember, you are here to support, not to be supported.” In other words, be supportive of Custer, the Americans, and the White Man.

(2) “Be mindful of whether your volume, pace and movements are supporting or undermining your efforts to decenter yourself.” Translation: if you are of Indian descent, control yourself and your peers. This holy site must not be desecrated by your loudness. You must show reverence.

(3) “Seek to contribute to the energy of the space, rather than drain it. Bring your own processing to other Indian folks so that you will not harm White People.” This is demanding that Indians be worshipful towards whites.

(4) “Consider if you want or need to take photos and post them. Do not take photos of other people without your consent.” Photographs are discouraged.

(5) “If you witness Indians doing problematic things, speak up with compassion to take the burden off of White folks and our siblings of the Caucasian race whenever appropriate. Seek to engage rather than escalate, so that it can be a learning moment rather than a disruption.” Plainly, do not argue about your Indian guilt—just admit it—and be respectful.

What would you think? Besides the obvious unabashed racism, you would assume immediately that the culture that allowed such a sign was controlled solely by White Supremacists. Be respectful to whites. You would also be suspicious that we are not likely to learn anything about the real history of the event.

Or, imagine being at the 9-11 Memorial in NYC. A sign at the front entrance instructs Muslims only to be respectful. Admit Islamic guilt as you enter. Take off your shoes, for you are on holy ground.

Actually, you cannot imagine the above. Our culture is to tilted against only one group of people—white people. Above are the exact instructions emblazoned on a sign at “George Floyd Square” in Minneapolis, directed “White People in particular.” It is declared to be a “sacred space for community, public grief, and protest.” Protest against whiteness.

Our culture is witnessing, in the name of fighting “Whiteness,” and “White supremacy,” a Black Supremacy that is taking over America. And you thought it was about alleged police brutality.