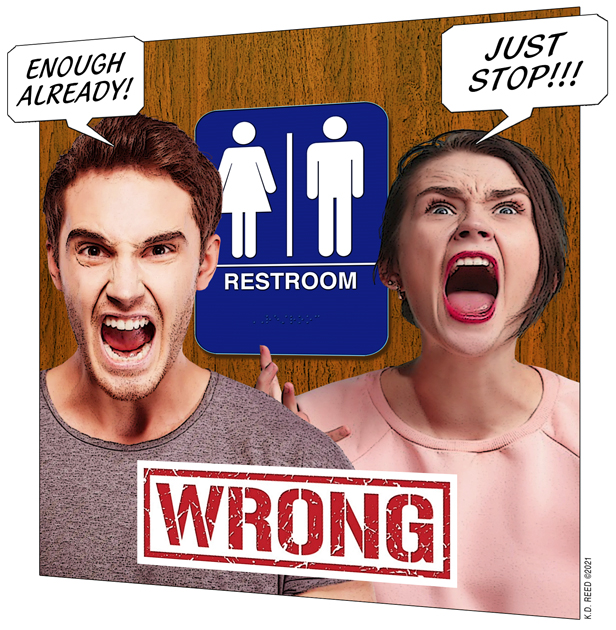 Christians and conservative Americans have lost their government. The sooner constitutionally-minded citizens awaken to this fact, the better. Individual freedom is a thing of the past, and no amount of “suing the government” is going to recapture it. Through the Biden Administration the liberal, Neo-Marxist, post-modern humanists, atheists and God-haters make up a Deep State.

If one doubts that assessment, consider the current lawsuit against the Administration by the College of the Ozarks.

According to The Federalist, the “College of the Ozarks in Hollister, Missouri, is suing the Biden administration over a directive from the U.S. Department of Housing and Urban Development forcing religious institutions to permit students of the opposite sex in the same bathrooms, dorm rooms and dormitories.”

Here is the White House’s “justification.” It announced in February that “it will administer and enforce the Fair Housing Act to prohibit discrimination on the basis of sexual orientation and gender identity.”

In other words, the Biden Administration is in the business of forcing private institutions to open girls’ dormitories to males based upon their “perceived” sexual identity. What high-handed arrogant atrocities by rulers! Biblical teaching regarding sexuality, marriage, chastity, and social order is under direct attack. As Dr. Jerry Davis, president of the school, announced, “To threaten religious freedom is to threaten America itself.”

Davis went on to make clear that “College of the Ozarks will not allow politicians to erode the essential American right or the ideals that shaped America’s founding.”

In the above, I stated that “suing the government” is not going to fix this hedonistic communism that has taken over America. For proof, examine a source of this moral sepsis. In part, they go back to the outrageous “ruling” by the Supreme Court last summer in Bostock v. Clayton County, Georgia.

In that case, six justices “turned themselves into legislators, rewriting the intent of the Civil Rights Act of 1964 to fit the current narrative, ruling that there is to be no ‘discrimination’ against the LGBTQ community, regardless of rights guaranteed in the Constitution protecting religious freedom.” This ruling was a 6-3 decision, in which supposed-conservative Neil Gorsuch, writing the majority opinion, stated that Title VII protections extended to sexual orientation and gender identity. “Sex-segregated bathrooms, locker rooms, and dress codes will prove unsustainable after our decision today,” he opined.

No, what is “unsustainable” is a Supreme Court, and Socialistic/Marxist government that intrudes upon all freedom—religious and otherwise. The federal government, and particularly the judicial branch in this case, has radically overstepped its constitutional boundaries. What solace therefore, should Christians take in “suing at court” the Biden Administration? And, even if there is a win in the College of the Ozarks’ case—what security has Christian America that these God-hating totalitarian trends will not continue?

Besides the obvious fact that the bounds of propriety, common-sense, decency, and morality have been trampled by Gorsuch and the Court, what about the Constitution? Ours is a Republic—the rule of law. This eliminated from the beginning the “rule by mob”, riotous mutineers, or even black-robed propagandists who goose step to political correctness. Adherence to law has been the hallmark of American society.

To change the law, specific provisions were instituted by our founders. These begin and end with the lawmaking branch of government—the Legislative. There is absolutely no lawmaking power granted by the Constitution to the judicial branch. Instead, they are sworn to uphold the Constitution as written.

However, in the Bostock case, the Supreme Court legislatively declared that that 1964 Civil Rights Act, which forbade discrimination on the basis of sex, must now include the non-scientific categories of “sexual orientation” and “gender identity.” Gorsuch and crew enlarged the meaning  of the 1964 law so that “sex” now includes “manipulations in the biological makeup of human beings or conduct that is clearly forbidden by the Almighty.” These six justices brazenly and boldly cast science and God behind their backs and inserted their modernistic version of what they believe we should be doing in America.

In sum, we have no rule of law. It is the whim of the Judicial Branch, among other areas of deterioration. So, again, I ask, what will be accomplished by suing in the courts the Federal Government? Justices are making it up as they go along. Christians, beware!