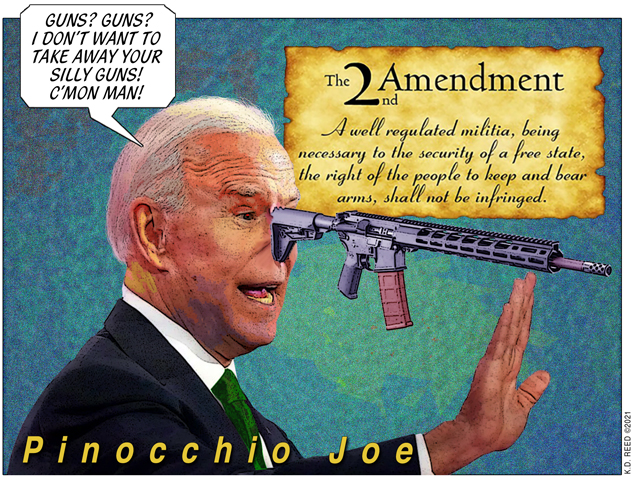 Strictly speaking, the right to “keep and bear arms” is not a “Constitutional right.” It is a right I own from God to protect my life, my family, and my property—whether individually or collectively. I have a God-given responsibility to protect myself and my family from harm. This is a law of nature and it is prior to the Constitution itself. So, it matters not what the Constitution says or does not say on the subject.

The Founding Fathers wrote the Second Amendment with this in mind. It is a “Thou shalt not touch” list written to the federal government. As a matter of fact, the Bill of Rights itself is a list of prohibitions, not rights. The reason this is the case is because the founders recognized the presence of Natural Law—such as self-preservation and self-government– upon which the laws of nations should be built.

The Neo-Marxist Democrat Party problem begins here. They do not, even if some of them believe in God, operate upon the premise that God gives us anything. To them, everything is a grant of the government—including the “right to keep and bear arms,” which may be repealed if they see fit. What the government gives, the government can take away.

Joe Biden and Kamala Harris are the worst of the worse of the totalitarian gun-grabbers. Joe Biden and the Socialists who run this country want to repeal the 2005 Protection of Lawful Commerce in Arms Act. They are back-door thieves. Passage of this Act makes it easier for gun manufacturers to be held civilly liable for people who commit crimes with their products, for the law was designed to shield gun manufacturers from lawsuits in cases where guns were used in crimes.

Last February 24, Joe Biden made the following statement on the campus of The College of Charleston in South Carolina. “I’ve got news for you gun manufacturers. I’m coming for you and I’m going to take you down.”

Biden has promised to sign an executive order—something with which he is intimately familiar—to ban “assault weapons.” But, first, he does not know what an assault weapon is. Biden includes in this list AR-15’s and other semi-automatic weapons. Second, the facts of American gun violence do not point to semi-automatic weapons. But no matter. Biden will have his foot in the door.

More concerning than this, however, is the current rash of Red-Flag Laws that have been supported not only by the Biden-Harris team, but politicians of both parties.  Ron Paul warns that “Police officers in 20 states and the District of Columbia already have the authority to take away an individual’s Second Amendment rights based in allegations and without giving the individual due process.”

Even a “psychological evaluation could … be used to deny an individual Second Amendment rights because they may engage in ‘domestic terrorism.’” Paul added that “Among those likely to be considered as potential ‘domestic terrorists’ are opponents of US foreign policy, mass surveillance, the income tax, the Federal Reserve, and, ironically—gun control.”

Consider also the rabid anti-gun stance of Biden’s hand-picked staff. VP Kamala Harris’ anti-freedom position is well-known. Xavier Becerra, Biden’s pick to lead the Department of Health and Human Services, has advocated for more onerous gun-control measures. He is on record as saying that AR-type rifles are “not in common use for lawful purposes like self-defense.”

Jen O’Malley Dillon, Biden’s campaign manager, worked for Robert Francis “Beto” O’Rourke, the candidate who said, “Yes, we’re going to take your AR-15’s.” Pete Buttigieg has been selected by Biden to head the Department of Transportation. He has openly pushed for gun registration and banning AR-15’s as well as desiring to hold the gun industry accountable.

Jen Psaki, the White House press secretary, has openly written that the gun violence problem in America is due to the “widespread availability” of guns in America. Jennifer Granholm, former governor of Michigan, is Biden’s nominee for energy secretary. She too has called for an “assault weapons ban.”

Deb Haaland has been confirmed as the new secretary of the Department of the Interior. Her calls for stripping Americans of the right to keep and bear arms, starting at “background checks,” “closing gun-show loopholes,” and “taking on the NRA” are public record. The bold-faced liar, Susan Rice, who heads Biden’s Domestic Policy Council, is an infamous anti-gunner.

Biden’s AG pick, Merrick Garland, has also sated he would support the The White House’s efforts to restrict gun ownership in America.

All in all, Biden’s Administration is the most anti-freedom, anti-American, pro-totalitarian government that we have seen. If Biden gets his way on gun control, America has seen the last of its freedoms.