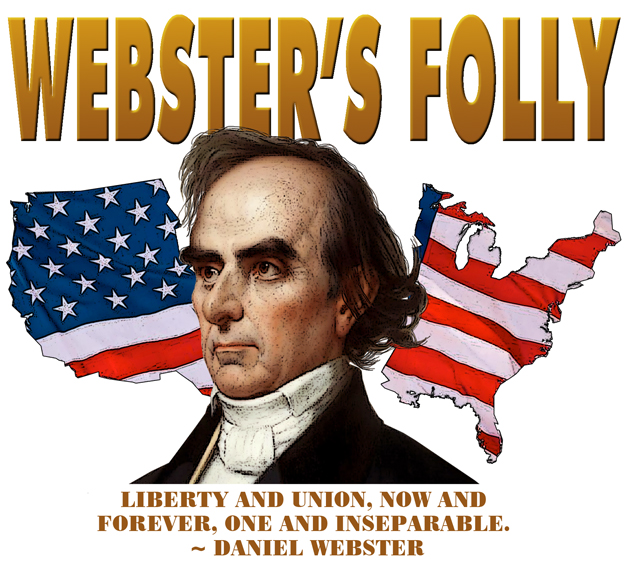 Robert Hayne of South Carolina was the first man to put forth conspicuously the doctrine of Nullification, by which is meant the right of a State to arrest the operation of a law of Congress, provided the State in convention should decide that the law was unconstitutional. The year was 1830. Hayne delivered his speech in the U.S. Senate on January 21.

At issue was the Tariff of 1828, popularly known in the South as “The Tariff of Abominations.” South Carolinians hated it, and not without cause. It strongly favored the northern states while causing the southern states to carry the lion’s share of taxes on imported goods. At the same time, the tariff  forced the South to go into debt to New England.  It was largely believed that “North had declared economic war on the South.”

Daniel Webster was Senator from the state of Massachusetts. He was disturbed that Hayne, in his objections to the tariff, had also asserted a states’ right to secede. Northern states looked to Webster to give reply to Hayne, which he did the following day, in what has come to be known as The Second Reply to Robert Hayne of South Carolina.

Webster is championed as providing an unanswerable argument to Nullification. It is widely believed, even today, that Webster “dismantled” the South Carolinian’s argument, “point by point.” Webster’s reply may have been over 150 years ago, but his rebuttal needs to be examined.

Before reviewing Webster, it is to be noted that the Senator from Massachusetts had earlier taken the position that what the Constitution did not specifically forbid, Congress may do. His argumentation was that the Constitution was a “sketch, an outline, not a detailed rendering.” “The true view of the subject is that if it be a fit instrument to an authorized purpose, it may be used, not being specifically prohibited.” Consider now Webster’s disputation against Robert Hayne on the floor of Congress.

Webster’s first response was to confess that a people had a natural right to revolution, to be openly disobedient and even to throw-off the yoke of a government, such as had occurred in our founding period. “Webster granted that the people were not bound to obey unconstitutional laws, and that they might disobey them without overturning the government.”

Webster’s objections are shallow and his distinction is arbitrary.

First, Webster had earlier argued that what the Constitution did not specifically forbid, Congress may do. This is now at cross-purposes to his stand against nullification. Hayne had pressed for a “constitutional right of resistance” by the states. But Webster now insists that Nullification is illegal since it is not specifically mentioned in the Constitution as a legal course of action. Gone therefore is his principled stand that unless a Congressional action was specifically forbidden the states or the people may do.

As stated earlier by President John Adams: “You have rights antecedent to all earthly governments; rights that cannot be repealed or restrained by human laws; rights derived from the Great Legislator of the Universe.”

Third, most importantly, a states’ right to Nullify, or Disobey a law that it believed was unconstitutional need not be grounded in the text of the Constitution itself. There is a natural right before God to manage our own government. This was the ground of the Declaration of Independence. Nullification is what the Founders practiced regarding England.

It is arbitrary to place a states’ right of self-government in the category “constitutional or not” as opposed to natural rights before God—as if all of our rights must be listed in the plain text of the Constitution. To this the founders would never agree. In fact, they specifically forbade that concept in the 9th Amendment. “The enumeration in the Constitution, of certain rights, shall not be construed to deny or disparage others retained by the people.”

Simply, the instrument of the Constitution merely granted certain specified rights owned by the people to the federal government. Webster’s position against Hayne, at least in this case, assumes that the role is reversed, that the people have whatsoever the government decides.

The Constitution a Revocable Contract?

Related to the above is the basic issue is whether or not the Constitution is a contract to which both parties, states and the federal government, agree. And at the heart of this is the issue of just who is the interpreter of the Constitution?

When, during the War of 1812, New England was convinced that the federal government was not serving their interest, Webster and others characterized “the Constitution as a revocable compact” and “furnished the philosophical basis for a New England declaration of independence.”

Now, however, in 1830, when New England profited heavily from the Tariff of 1828, to the South’s detriment, Webster reversed himself. When Robert Hayne argued that the “true defenders” of the Union were “those who would confine the federal government strictly within the limits prescribed by the Constitution, who would preserve to the states and the people all powers not expressly delegated …”, Webster disagreed. If Webster is correct here, the field is wide open. America is exactly where it is today by the logic of Webster’s reasoning.

“The great question is,” per Webster, “whose prerogative is it to decide on the constitutionality or unconstitutionality of the laws?” This is the crux of the entire discussion. Webster answers that it lay with the federal government alone, in particular the federal judiciary. In response, consider:

First, Webster is in the field of philosophy, since the Constitution itself, by its language alone, does not specifically address the “interpreting” the Constitution, at least as mandating law for the entire country. It is noteworthy also that neither Jefferson nor Madison agreed with Webster at this point. The ‘Principles of ‘98’, which they authored, pointedly took issue with his assertion. And it is more than highly doubtful that any of the Founding generation would agree that the federal judiciary alone could decide laws for the entire nation.

Second, the federal constitution was founded as a contract, a compact between the States and the federal government. To ignore this is to ignore the entire fabric of the Constitution. When the Pilgrims escaped to American shores they were escaping a top-down control of the Roman Church in the Old World. Though ignored by modern America, this is the taproot of our Constitution.

Our Founders believed that their associations in religion were voluntary, which lay at the base of their political associations. This type of preaching gave rise to the words of the Mayflower Compact. “We solemnly and mutually, in the presence of God and one another, covenant and combine ourselves together into a civil body politic …” The Fundamental Orders of Connecticut of 1639 reads exactly the same. These were antecedents to our Federal Constitution.

These concepts gave rise to the fundamental law of our nation, The Declaration of Independence, which asserts that “the consent of the governed” is for rule to be legitimate. This principle Webster, as well as myriads of moderns, freely cast aside by the assertion that the federal government alone may decide what is constitutional. Not much consenting in that.

As noted above, Webster himself agreed with the principle of Nullification in matters of “palpable” departures and that it is true that “the people are not bound to obey unconstitutional laws.” But if this be the case then the ability to “interpret” the Constitution does not lie within the province of the federal judiciary alone. Webster did not see his inconsistency.

Third, most ominously, if Webster is correct, then once again the field is boundless for Congress to make whatever laws it desires. As long as an activist Supreme Court agrees, these legislations become law and there is absolutely no recourse, per Webster’s argument, for the citizens that must chafe beneath the burden of these laws.

No matter how wicked or onerous, whether it enact socialism or communism, infanticide by law or homosexual unions, a one-child policy as in China, the socialist redistribution of wealth, an open border or nationalized health care carried on the backs of the middle-class—citizens are legally bound to bear that yoke.

This is where the logic of Webster leads.

Webster finished by asserting that if a State has the right to nullify federal laws, then the entire Union is a “rope of sand” and we are “thrown back again … upon the old Confederation.” The people had, Webster reminded, “rejected the Confederation by ratifying the Constitution, whose central point was to prevent the states from vetoing measures enacted for the common national good.”

He added that people ought to repudiate Hayne’s principle of “Liberty first and Union afterwards.”

Let us here agree with Webster on confederation. If states have the right to nullify laws, perhaps we are indeed “thrown back” onto the ‘old confederation’ which the people “rejected by ratifying the Constitution.”

Must Webster’s principle of Union first, and Liberty afterward always be maintained? Does this ring true to the Founders’ vision? As Webster announced it, it must. But if so, we “are thrown back” onto eventual subservience and despotism. How far must we uphold “Union” to the detriment of our “Liberty?”

James Madison asserted, almost as if he was prophesying of modern America, “The accumulation of all powers, legislative, executive, and judiciary, in the same hands, …may justly be pronounced the very definition of tyranny.”

We have certainly crossed to the other side of the road in America where tyranny has become commonplace. Webster would certainly have agreed, at this point, that his principle of Union first, and Liberty afterward, is no longer valid. But if not valid now, neither was it then. We should not be left to the Webster’s of the world to tell us just when we should cherish our liberties more than the Union.