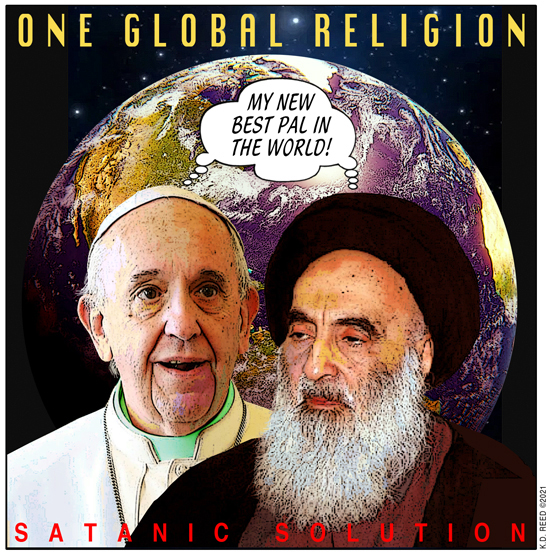 The pope was making a theological point, that all human beings are sinful, and that this destruction is a manifestation of that sinfulness. But it is also noteworthy that he ascribed the destruction he saw to all of humanity, and decried nations that sell weapons, but never said a word about why the ruined buildings he saw were destroyed in the first place. The Islamic State destroyed mosques because the people who attended them did not accept their authority, and were thus apostates in rebellion against the caliphate. It destroyed churches because they were places of unbelief (see Qur’an 5:17, 9:30, etc.) and shirk, the association of partners with Allah in worship. But there was never any possibility that the pope might ask the assembled Muslim leaders to fight against jihad violence and teach their people to refrain from jihad violence. After all, the pope has committed himself and the Catholic Church to the proposition that Islam is peaceful and has nothing to do with terrorism, so as far as he was concerned, there was nothing for him to ask the Muslim leaders about. And that rendered the trip a useless and indeed counterproductive exercise.

VATICAN CITY (RNS) — Aboard the papal flight back from Iraq, the first papal trip since the COVID-19 pandemic began, Pope Francis addressed criticism of those who have accused him of being “one step away from heresy” in his commitment to promoting human fraternity among the world’s faiths.

“There are some critics who say the pope is not brave but reckless, that he’s taking steps against Catholic doctrine, that he’s one step from heresy,” the pope told journalists on Monday (March 8).

Francis said that his decision to speak with Muslim religious leaders and promote interreligious dialogue is “always made in prayer, in dialogue, asking for advice.” He said that his efforts to mend Christian-Muslim relations, far from being “capricious,” are in keeping with the doctrine laid out by the Second Vatican Council….

On Saturday (March 6), the pope met in Najaf, a holy city to Shia Muslims, with Grand Ayatollah Ali al-Sistani, Iraq’s most prominent Shiite leader. The historic meeting, which lasted roughly 45 minutes, was the first official meeting between a pope and a prominent Shiite representative.

The pope described al-Sistani as “a humble man” who has “wisdom and prudence,” adding that “it was good for my soul to encounter him.” Francis said the meeting was “a duty in his pilgrimage of faith” to promote human fraternity among religions….

It was the tragic decimation of the Yazidi ethnic community by the Islamic State group following the 2014 occupation of Northern Iraq that inspired the pope to make the trip, he said. The book “The Last Girl” by Nobel Peace Prize-winner Nadia Murad, which described the suffering of the Yazidi people, “provided the background for the decision,” he said.

On Sunday (March 7), Francis viewed the ruins of mosques and churches in Mosul, the capital of the Islamic State during the occupation. He said he “had no words” after seeing the scale of destruction. “Human cruelty, our cruelty, is impossible to believe,” he added.

The pope also criticized those nations selling weapons, though he didn’t single out any particular country….

Among the topics addressed by the pope during the trip was the question of the suffering of immigrants, which has been a main focus of this pontificate. Francis met with the father of a 3-year-old boy who died attempting to cross the Mediterranean Sea. The picture of Alan Kurdi’s body became a symbol of the plight of immigrants and refugees in Europe and beyond….

Robert Spencer is the director of Jihad Watch and a Shillman Fellow at the David Horowitz Freedom Center. He is author of 21 books, including the New York Times bestsellers The Politically Incorrect Guide to Islam (and the Crusades) and The Truth About Muhammad. His latest book is Rating America’s Presidents: An America-First Look at Who Is Best, Who Is Overrated, and Who Was An Absolute Disaster. Follow him on Twitter here.