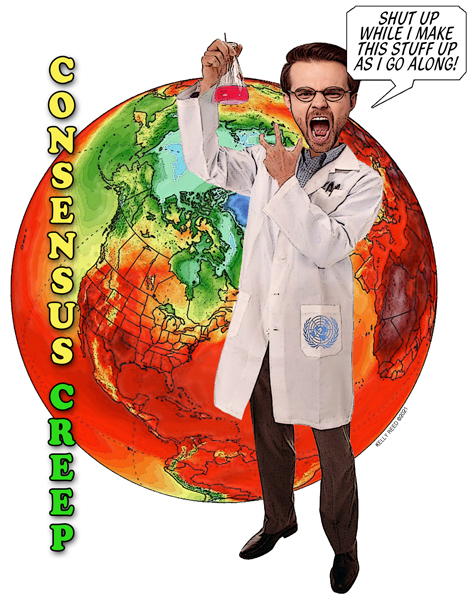 Climate Change alarmists claim that about 2700 scientists agree with them and that these represent about 97% of all scientists. And so, they claim, it is an indisputable fact. But the fact is, there is no consensus in the scientific community over Climate Change. A U.S. Senate majority report says more than 650 scientists express dissent over man-made global warming claims.

In addition, over 30,000 scientists have signed on to a petition that says there is no convincing evidence that human release of carbon dioxide, methane or other greenhouse gasses causes or will … cause catastrophic heating of the Earth’s atmosphere and disruption of the Earth’s climate.

We have all heard the Barack Obama’s of the world saying, “the debate is over” regarding Climate Change. Climate Change is real, we are told, and man-caused. The plain message is that we must curtail the free market, get rid of private property laws in America in order to save the planet.

Almost all Climate Changers then pontificate that 97% of all scientists agree that man, specifically American people, are the real polluters, and that this is the cause of our Climate Emergency.

Science is physical observation, hypothesis, and experimentation to test the hypothesis. It also includes the ability to reproduce the results. This has nothing to do with how many scientists believe a certain thing. One scientist in a laboratory can overturn an entire “belief system” of a scientific community.

The late Michael Crichton, who had an earned a medical degree from Harvard Medical School in 1969, spoke in 2003 at California Institute of Technology at Pasadena, California. Pointing out that “consensus” has nothing to do with science, but is a only a justification for shutting down opposite ideas not associated with their beliefs.

I regard consensus science as an extremely pernicious development that ought to be stopped cold in tis tracks. Historically, the claim of consensus has been the first refuge of scoundrels; it is a way to avoid debate by claiming that the matter is already settled. Whenever you hear the consensus of scientists agrees on something or other; reach for your wallet, for you’re being had.

Let’s be clear: the work of science has nothing whatever to do with consensus. Consensus is the business of politics. Science, on the contrary, requires only one investigator who happens to be right, which means that he or she has results that are verifiable by reference to the real world. In science consensus is irrelevant. What are relevant are reproducible results. The greatest scientists in history are great precisely because they broke with the consensus. There is no such thing as consensus science. If it’s consensus, it isn’t science. If it’s science, it isn’t consensus, period.

Dr. James D. Bales, long-time professor of Bible at Harding University in Searcy, Arkansas, made the same point pertaining to the Creation v. Evolution controversy. “If to be accepted by scientists” [or any number or percentage of them] he noted, “is all that is meant to establish something scientifically, then the only scientific method would be to count heads.”

“If more scientists accept a position than reject it, the minority has been outvoted and the scientific truth is whatever the majority says it is.” However, this in turn means that

“Consensus science”, by which is meant, how many scientists believe something, is not science at all. It is in reality, “consensus among scientists,” which establishes nothing scientifically. Scientists believed at one time the earth was flat; they believed that Jews were inferior peoples, some today believe in spontaneous generation—that life comes from non-life; many believe in natural selection and mutation and that species change based upon inherited characteristics. None of these have been established scientifically.

Consensus science is no science at all.