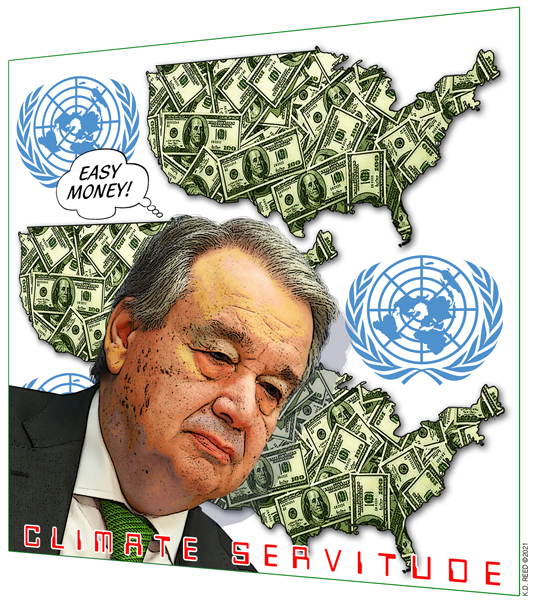 The war has always been between liberty and bondage. Allow people to control their own lives with local government, or will complete control of people gravitate to the top in a statist society? The left has been about the latter, which is why the United Nations was initially created.

One tool only is in the toolbox of the UN Dictator’s Club—Climate Change, which is now upgraded to “Climate Emergency.” So bartender turned scientist Alexandria Ocasio-Cortez warns. It is the crowbar to beat America over the head into economic submission. We must bow down to the Imperialism of the UN—for the environment, of course. Eco-Imperialism.

The Dictator’s Club Secretary-General Antonio Guterres calls on all the countries of the world to immediately declare a “climate emergency” (December 12 Summit). His hand-wringing last year included that President Donald Trump had withdrawn from the “Paris Climate Accord.” Trump actually exposed the truth that the Sustainable Agenda of the UN Paris Accord is nothing less than a socialist siphoning-off of billions of American dollars to redistribute around the world. Climate sins, you know.

Now that Joe Biden is in, what a relief to the globalists! His first day in office, slow of speech he may be, but he quickly began goose-stepping to the tune called down from the globalist masters, and the Paris Climate Accord has been rejoined. He can’t speak very well, but he can take orders.

That was a close one for the Global Masters of the UN. With Donald Trump at the helm, it looked like they would not conquer America after all. This is why Jeffrey Sachs, an economics professor at Columbia University, and Director of the Center for Sustainable Development, opined out loud that the most severe emergency facing the Dictator’s Club was Donald J. Trump being in office. Now that that is solved, back on the fast-track of globalism and eco-imperialistic governing from the United Nations.

A “State of Climate Emergency” has been declared by the UN. Antonio Guterres breaks it down for us. “This is a moral test. We [read, ‘America’] cannot use these resources [fossil fuels] to lock in policies that burden future generations with a mountain of debt or a broken planet.” The prime minister of Barbados, Mia Mottley, suggested that the primary crime of America was that we are “major emitters of carbon dioxide.”

What about the real major emitters, China and India? Chinese President Xi offers only modest changes to cut emissions per unit of GDP by 65 percent by the end of the decade. He also promised to make non-fossil fuels account for 25% of China’s energy by 2030. Indian Prime Minister Narendra Modi pledged no new climate commitments.

No matter. It is America the globalists want. Our liberty has rendered us immoral climate sinners. Morality has nothing to do with how many of its citizens China may torture. No. It is how much carbon dioxide society as a whole emits. Guterres knows. We must submit to the Eco-Imperialists. This is the moral thing to do. And you thought science was a study of the natural world through systematic observation and experiment. Foolish Americans.