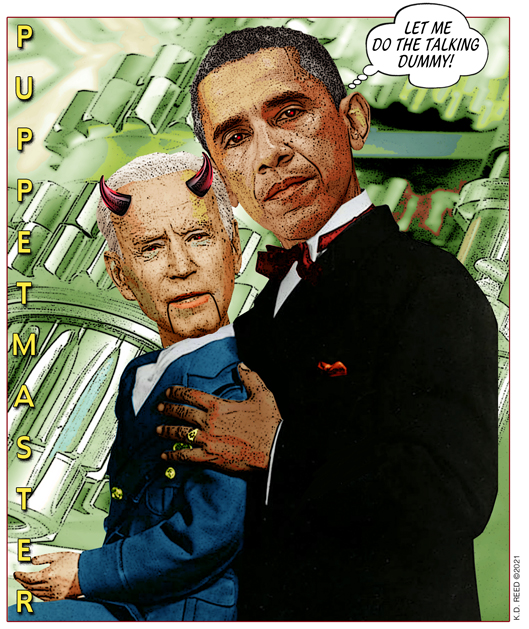 I’ve written thousands of columns and commentaries. This is the most important I’ve ever written.

Republicans, Conservatives, patriots and capitalists are sick right about now. We’re in shock. We can’t believe Trump isn’t president. We can’t believe Americans voted against the greatest economy, perhaps in history. And the greatest jobs picture ever. And the greatest improvement in middle class incomes ever. And after the Covid lockdown and economic collapse, Trump produced the greatest economic comeback ever. Remember 33% GDP in Q3 2020? That was the biggest number in history. Who would vote against all that? You’d have to be self-hating and suicidal.

We also can’t believe America voted for a feeble old man with dementia who mumbles “I don’t know what I’m signing, but I’m gonna sign these Executive Orders.” And who says “There was no vaccine before I became president.” Even though he got his two vaccine shots before he became president.

We all believe the election was rigged and stolen. We all know the feeble old man now called “President” would be more at home in an assisted living home, than the White House. That man can’t be our new president.

I have news for my fellow conservatives, Republicans, capitalists and patriots. Biden’s not president. He’s a puppet. Yes, we have a new president. But his name is…

Admit it. Now that I’ve said it out loud, it all makes sense. Obama is the real president, back for his third term, to finish the job.

Biden’s job was to stand there and look moderate, and credible, and reasonable. So as not to scare the voters. But Biden isn’t the real president. Obama is the man with the power.

Look at the radical Executive Orders, the most in history. And they all sound like Obama wrote them. This third term is “Obama Unmasked.” With Biden as the front man, Obama can finally be himself. Obama is able to do all the radical things he never dared do as the actual president.

Look at the executive orders and new laws and policies
proposed…

• Open borders. No more wall. Everyone gets in, during a pandemic, with no testing for Covid. Illegal alien felons must be released from jail. Halt to deportations. Full legalization for
millions of alien lawbreakers. Include illegal aliens in the US census. Once into the country, give them the right to bring all their relatives in too, with no requirement for education, skills or background checks. Ban the use of the word “illegal alien.”

• Make every action and economic policy about “racism” “social justice” and “racial equity.” Even climate change is about “racism.”

• Re-start the Iranian nuclear treaty. Give murdering Mullahs everything they ever dreamed of, and then some, endanger our best friend Israel’s existence, and get absolutely nothing in return. And for good measure, wait over a month to call Israel’s Prime Minister, so the whole world knows we no longer have Israel’s back.

• Kill the lucrative US energy industry and make us dependent on foreign oil from our enemies again. Kill the Keystone Pipeline. Kill oil, coal, natural gas, fracking, even permits for drilling. Re-enter the Paris Climate Agreement that kills all our jobs, while allowing China to pollute all it wants. This will decimate our economy and make us dependent on the same kind of green energy that just caused the meltdown in Texas.

• Ban the use of the term “China virus.” End the trade war with China. Give China access to the US energy grid.

Even the players in Biden’s cabinet and staff are all Obama re-treads.

Trust me, I’m Obama’s Columbia college classmate. I know how he thinks. I understand his plan. This has Obama’s fingerprints all over it. This is the Cloward-Piven plan we learned at Columbia University, almost 40 years ago.

This is the 3rd  term of Obama. In his first two terms Obama tried his best to destroy the economy, high-paying jobs, healthcare, the US energy industry, the great American middle class, our relationship with Israel, American exceptionalism, and capitalism itself. He damaged us badly, but he fell short.

Now Obama’s back to finish the job.