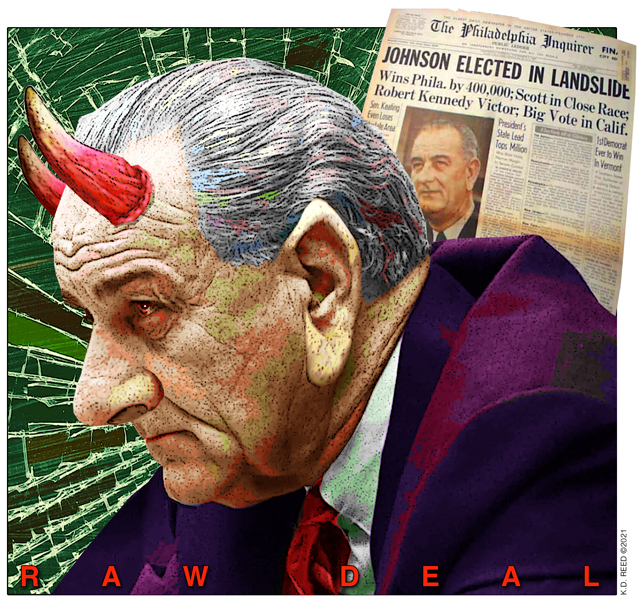 The year is 1948. The man is Lyndon Baines Johnson, an operative of ruthless power with no moral compass to guide him. The arena is the Democratic Primary for a Senate seat vacated by W. Lee (Pappy) O’Daniel. Opposing him for that seat in the U.S. Congress is Coke Stevenson, a strict conservative who boasted he had “never voted for a tax bill.” Stevenson was the product of the hills of Texas, had been a cowboy, a country lawyer, and spent time as a freighter.

The lesson that follows is pertinent to America in 2021: it is a story of stuffing ballot boxes, stealing an election, and twisting the Constitutional system completely out of shape. Did America learn?

Richard Kleberg, of King Ranch fame, had been elected to the U.S. House of Representatives from the 16th District in south Texas in 1931. Accompanying him to Washington was his secretary, LBJ. Once there LBJ, ever the wheeler-dealer, became solidly in the New Deal socialistic camp of FDR. “The devious ways of Washington were duck-soup” to LBJ.  In 1935 FDR put him over that boondoggle of a program, the National Youth Program.

In 1937, after resigning from the NYP, Johnson became a Congressman from Texas’ 10th Congressional District. LBJ was unsuccessful in a 1941 bid for a Senatorial seat that Pappy O’Daniel eventually won. Coke Stevenson became governor of Texas that same year.

However, in 1948 O’Daniel decided not to re-run for Congress, which set the stage for a Democratic Primary contest between LBJ and Coke Stevenson. Coke was popular in Texas, and the New Dealers were his enemies by principle. LBJ was a leading socialist, supported by FDR, the Washington establishment, and the Brown & Root Texas contractors whose war-time contracts had become a scandal in itself. Also in LBJ’s corner was George Parr, a multi-million-dollar criminal whose profits from illegal liquor, gambling establishments and houses of prostitution landed him in jail. He became a huge power-broker in south Texas after his incarceration.

Perhaps the saddest part of the saga is that the New Deal socialism had already begun showing its deleterious effects on the American people by means of a steady erosion of character with its sordid appeal to the most selfish traits of human nature.  Ideological confusion was the order of the day, class warfare had begun in earnest and hatred was growing—the full flowering of this one can witness today.

Just west of Corpus Christi, Texas is situated Jim Wells County with its county seat being the community of Alice. With the voting in the Democratic Primary being extremely close on July 24, Johnson was behind. Stevenson’s lead began to dwindle, however, as more precincts reported. Then, Johnson votes began to “magically appear.” Yet, Stevenson maintained a lead by a mere 349 votes and election officials declared him the winner. But the “counting” was not finished.

Johnson calls George Parr, the “Duke of Duval” County, whose family machine controlled much of the politics in south Texas. Parr told Johnson “not to worry.” Jim Wells County “re-canvassed the votes” and by September 3, Jim Wells County called in a 200-vote change that gave Johnson an 87 vote-lead.

The State Democratic Executive Committee convened in Fort Worth before their official meeting time, their subcommittee having already met in Austin, and they said they accepted the votes from “Box 13”—Jim Wells County. As R. Cort Kirkwood noted, Coke “Stevenson wasn’t fooled.”

Stevenson, the man who taught himself bookkeeping by campfire light and had caught rustlers with friend and now Texas Ranger Frank Hamer, traveled personally to Jim Wells County to check the vote tallies. Hamer went with him, along with two lawyers. They went to the bank in Alice and demanded to see the records which were kept in a vault. Parr’s henchmen, armed with Winchesters, were guarding the bank. Neither Hamer nor Stevenson were intimidated.

Once inside the bank an election official allowed them to see the election records where the evidence was in plain sight that the entire election had been stolen. Looking at the poll list, they found that 200 names had been added to the list, all in the same handwriting, all in alphabetical order, all written in blue ink—which was distinct from the black ink in which the other names had been registered. They had their proof.

An LBJ crony, Judge Roy Archer in Austin, however, gave an injunction against Stevenson and Hamer and forbad the County Committee to meet. Friends in high places. The counter attack came to a standstill. Stevenson appealed to a Federal Court where Judge T. Whitfield Davidson presided.

When Davidson heard the evidence from Stevenson’s lawyers and had listened to LBJ’s attorneys, he became at one point personally enraged against the LBJ team. Not only were Stevenson’s contentions completely unchallenged, but LBJ’s lawyers, in typical liberal fashion, spent all of their time berating Stevenson on a personal level for being a “poor loser.” Judge Davidson cut them short. “There has not been one word of evidence submitted!” he thundered against the LBJ team. He put off the final decision until September 28.

LBJ’s connections to the “powers that be” seemingly knew no bounds, however. Perhaps it is simply that socialism creates its own fraternity. Be that as it may, Hugo Black, the former Ku Klux Klansmen, and ardent supporter of the New Deal, now on the bench at the Supreme Court, issued a sweeping order in behalf of Johnson and ending the hearings in Davidson’s court in Ft. Worth.

Judge Davidson, knowing that the Supreme Court had no jurisdiction in this matter—it being a State primary over a party nominee–nevertheless was forced to close shop. “The US Supreme Court has altered my opinion,” quipped Davidson, “but it hasn’t changed my mind.”

Johnson goes to Washington as Senator, later as President. His Great Society finished establishing the New Deal socialism into America as a ubiquitous nightmare.

What Are We to Learn?

Lessons come hard for “we the people.” Vote stealing, stuffing ballot boxes, loss of integrity of the election process—it has been occurring for a long time, generally at the hands of socialists who intend to change America, trashing the Constitution in their wake. We are seeing the same thing today, only now it appears to have swept the entire nation, placing Joe Biden where he should not be.

More importantly, America is now encased in a socialistic cage which has all but destroyed our nation. The Welfare State in which we currently live has entrenched globalists and Marxists in positions of power while at the same time gnawing the morals and ethics of people like an aggressive cancer eating away the organs of a body. Citizens hardly know the difference between government theft and redistribution and personal charity, and frequently put the former for the latter.

Perhaps most pertinently, the alternative conservatives seek of recourse to the Court system to stop the onslaught against freedom is a placebo. Oh, there may be a few court wins here and there. But look at the big picture.

We live in an unconstitutional welfare state—with the imprimatur of the Court system. God has been exiled from classrooms and public places—thanks to activist courts. Murdering the unborn continues unabated—by “rights” invented by the Court. Homosexual marriage has been installed as a legitimate civil union—once again by the Court, overstepping the will of the people. California itself has had ballot initiatives successfully voted on by the citizens of the state—against same-sex marriages and another denying taxpayer funding to illegals—both to be cancelled by activist courts and judges. Self-rule by citizens is effectively dead. We live in a black-robed oligarchy.

Add to this now that censorship of conservatives is on steroids; we have no effective border any longer; and Marxists rule in Washington behind chained-linked fences. Will we ever see freedom again? Will the Court System save us? Hardly.

Maybe instead of “waiting for the next election,” of which the integrity is in serious question anyway, it is time to drive toward State Sovereignty by Nullifying at a State Level federal unconstitutional laws. If our state representatives and senators have not the backbone for this, then perhaps a people’s move toward secession is in order.