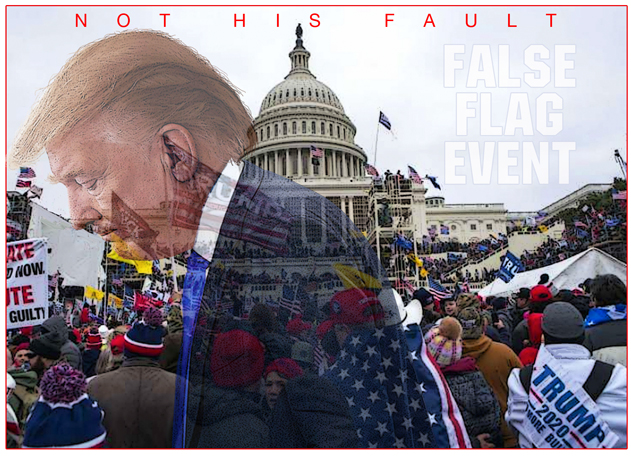 Hypocrisy is not simply failing to live up to a standard, but is rooted in deceit. Our Lord accused the Jewish leadership of being “hypocrites” in the 23rd chapter of Matthew, not because they had failed to live faithfully to the law, but because they were power-brokers, establishing their own system while purposefully ignoring God’s Revealed Law. Hypocrisy points to ulterior motives. It is steeped in hidden agendas, double-dealing, dishonesty and duplicity.

The utter shock continued to be displayed by the MSM, the communists/socialists of America (aka Democrats), Big Tech, and the Main Stream Culture over what occurred at the Capitol last week is a case in point. No one, least of all myself, agree with violence or storming the Capitol building by anyone, be it a MAGA supporter or anyone else.

However, to continue to blame Donald J. Trump for what occurred, and beating the drums for his head on a platter, to use another biblical reference, illustrates hypocrisy in its deepest dye. We need to ask, what hidden agenda, what ulterior motive has the left for such blaming? Consider the constant hypocrisy Americans have witnessed over the past four years, all with the imprimatur of our cultural leaders.

Lefty Madonna, before Trump sat in the Oval Office one day, spoke of “blowing up the White House” while Democrats present cheered by the hundreds. Remember also the riots where cars were set ablaze in Washington, D.C. because Trump had been elected. Which voice on the left did we hear condemning this?

Not to be outdone, Kathy Griffin posted a bloody picture of her holding “Trump’s head” in her hand. Democrats defended the violence-mongering. Then there was the Hamilton: An American Musical play, which openly challenged President Trump with VP Mike Pence in the audience. No voice was heard from the left in protest for “creating a violent atmosphere.” Another play, Julius Caesar, depicts the famous Roman dictator dressed as Donald Trump, being assassinated. The New York audience whooped and cheered, while Democrats sat silent. Liberal Snoop Dogg, the rapper, shot a “Lavender” video in which he portrayed the same thing. No objections from the left.

How about communist-lover Rep. Maxine Waters? A year after liberal James Hodgkinson actually shot U.S. House Majority Whip Steve Scalise, as well as others—being completely motivated by leftist rhetoric of violence and killing—Maxine Waters, not seeking to “tone down the rhetoric,” infamously yelled at an open-air gathering to “get into their [Republican] faces” and tell them they are not wanted here or anywhere! One might think that one wicked witch haranguing against Republicans does not a case make. But the point is: when did we hear one single Democrat calling for her removal, discipline, or a tech company censoring her? Any MSM pundits condemn her? No. The underlying message was clear: violence is approved if against conservatives.

The atmosphere has been electrically charged by these Democrat war-mongers who encourage more violence against Republicans. Sarah Sanders, press secretary for Donald Trump, was run out of a public restaurant. Sen. Ted Cruz was publicly heckled and mobbed to leave another eating establishment. Attempted murder on a ball field made no difference to any Democrat. Aggression. Tucker Carlson and his family were harassed and threatened by leftist mobs. Sen. Rand Paul was attacked with a hammer in his yard by a leftist and sent to a hospital.

And who can forget the Brett Kavanaugh hearings? His life destroyed by Democrat lies on top of lies, Capitol Hill was turned practically into a war zone as Republican lawmakers were continually cornered and threatened by mobs roaming the halls. Offices were stormed, people were arrested. But the Democrats and MSM celebrated this as somehow the “working of Democracy.”

Finding their stride now, the Leftist Revolution led by Democrats continued. Eighteen months after the Kavanaugh hearings, Antifa gangs showed up at Trump rallies and marches in San Diego, in Phoenix, and other places. Violence occurred. This is what the right deserves, was the MSM take.

Then there were the George Floyd protests that invariably turned violent. Washington, D.C. had burning buildings; Chicago, Milwaukee, Seattle, Portland, Baltimore, and other cities all saw huge acts of riotous violence in which entire towns look like downtown Baghdad after bombers had struck. America watched on television as police headquarters were burned, enforcement officers were beaten, and Trump supporters were physically assaulted.

Did the communist-inspired left speak in condemnation of any of this? No. Instead, VP-elect Kamala Harris, bailed out of prison some of the rioters. She later publicly declared in debates, as did Joe Biden, that this was all “peaceful protest.”

Instead of mourning for this mayhem, the only thing we heard from Democrats when President Trump went to a burned-out Cathedral in Washington, D.C., and held up his Bible, was that he was the hypocrite taking advantage of a photo op. No remorse. No outrage. No unity to pull America out of the ashes. Just more hate.

In response, Democrat/communist leader in the House, Alexandria Ocasio-Cortez, tweeted that all violence was necessary. “The whole point of protesting is the make ppl feel uncomfortable.” “That’s the point.” Sally Kohn, liberal political commentator, could only say, “I don’t like violent protests, but I understand them.” (5/3/20).

Communist-inspired mobs attacked the Portland, OR courthouse for more than 60 days. Twenty-one Police officers were hospitalized. Portland mayor Ted Wheeler even joined rioters and participated in demonstrations. Finally, the mayor had to be escorted to safety. Seattle mayor Jenny Durkin encouraged and lauded the anarchists as they set up an “autonomous zone” in her city. Insurrection has been afoot for years and it is encouraged by the left. Monuments of America culture, including Confederate statues, memorials to presidents, and others have been ransacked—all encouraged by Democrats.

Dallas, TX saw the breakdown of the rule of law. Viewers could watch on television as young blacks beat into unconsciousness white people running down the street. Yet, no outrage from Democratic lawmakers. Why? Because their Marxist playbook calls for it. Burn it down. Police were told in these cities to “stand down.”

A piece in the left-wing journal Current Affairs argues that “destroying property is not in and of itself a violent act.” “The word ‘violence’ should be reserved for harm done to people,” wrote editor Nathan J. Robinson. CBS News’ Hannah Jones agrees. “Violence is when an agent of the state kneels on a man’s neck until all of the life is leached out of his body. Destroying property, which can be replaced, is not violence.”

And what about the Republican National Convention, the aftermath of which saw leaders such as Rand Paul physically attacked by Democrat-inspired mobs? Or the thousands of goose-stepping Democrats who literally occupied the Wisconsin Capitol building in Madison and physically occupied it for two weeks? “This is what Democracy looks like,” said the left. Even President-elect Joe Biden refused to condemn Antifa in the public debate with Donald Trump, chirping the liberal catch-line: “Antifa is only an idea.” Well, there are many people in America who are physically injured from this “idea.” But Joe could not bring himself to condemn any of it.

Then we are treated to AOC as well as Ilhan Omar both refusing to condemn any of this violence when asked about it on camera. Instead, they smugly walked by reporters who taunted them with the question of whether or not they were against the violence. And let us not forget Speaker of the House Nancy Pelosi demonstrably on camera tearing up the State of the Union speech immediately after Trump finished speaking.

Colin Kaepernick, the infamous America communist-sympathizer, responded to all of these years of leftist violence with this tweet. “When civility leads to death [speaking of George Floyd], revolting is the only logical reaction.” “We have a right to fight back.” So violence and destruction is all right—as long as the cause is justified. He has been endorsed by major sports teams as well as corporate America.

We deplore the Capitol violence. But for the reasons above we do not condemn the thousands of peaceful protestors who went to Washington, D.C. last week to legitimately exercise their patriotic and constitutional right to voice their opinion on the election. We uphold them and champion them. And we will not be so naïve as to vilify them by lumping them all into the category of the lawbreakers who stormed the Capitol.

Most of all, we do not intend to be lectured about the besieging of the Capitol by the Marxist Left that has sponsored, endorsed, and excused violence for four solid years.

For the MSM and the Democrats to feign outrage over the type of violence that they have patronized is diabolical hypocrisy. Their true agenda is the total overthrow of American liberty. As our Lord put it, these liberals have “compassed sea and land to make one proselyte” but they have made them “more than a twofold son of hell more than” themselves (Matt. 23:15).