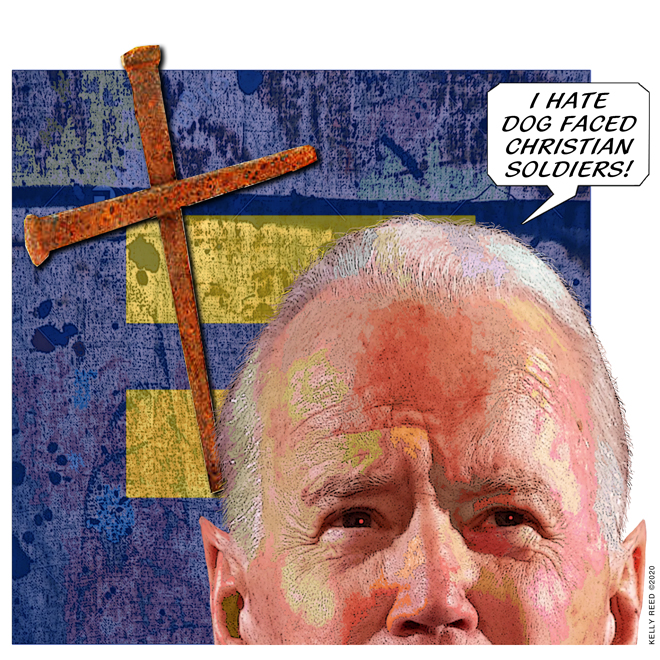 Selwyn Duke tells in The New American of a tour guide in Hungary who once explained to visitors how that nations’ Marxists “dealt with” Christians. “It wasn’t that you couldn’t be a Christian … you could pray at home, worship at home and with your family, even get baptized and go to church. However, you had a choice. You could either be a Christian … or you could be successful.”

Unfortunately, this is the same picture that is being filled in America today, and will become eminently so if and when Biden takes the oath of office. The Human Rights Campaign (HRC), which is America’s largest and most powerful LGBTQ Lobby, is pushing the incoming Biden Administration to target Christian Colleges and Universities, and in essence, Christianity itself. The HRC offers 85 suggestions in their Blueprint for Positive Change, including eliminating non-discrimination exemptions for religious colleges if they refuse to ABANDON the biblical position on marriage.

Holding the federal government’s “accreditation” standards above the heads of Christian educational institutions, the HRC recommends:

There it is in plain language. Withhold accreditation to Christian Universities if they do not abandon biblical standards for teaching, hiring admissions, student housing, student life, college clubs and organizations, and even teaching. There will be no student loans—since the government already has removed that from the free market several years ago—no grants, no assistance to fund private university education. Christian schools must lose their Christianity.

“Conversion therapy,” the phrase that the LGBTQ community uses for making efforts to “convert” or “change” a person from their so-called “sexual orientation”, is absolutely forbidden. As noted above, the homosexual community dons the false mantra of “science”—aided and abetted by the Democratic/Socialist Party—and from that standpoint, demands that no “school counselor” or “school-based mental health professionals” or “social worker” provide or even refer students to “providers of conversion therapy.”

What shall we say to these things?

First, this means that the homosexual agenda is so weak that it needs the full strength of government force to demand that society “recognize” that homosexuals are “born that way.” It naturally follows from this that there will be no preaching of the message of Christ which requires repentance from sinful activity. This is tantamount to setting the government itself up to define what is SIN and what is NOT Sin.

For those who suppose that this would never occur in America, they are lagging in information. Such laws already exist in states such as California and New Jersey—the latter state having implemented similar programs during Gov. Chris Christie’s governorship.

Second, this is nothing less than an unabashed war on Christianity and biblical values and anyone who espouses them. Next we will be hearing, “Bring on the Lions!” It is past time for Christians to engage and get political, if they wish to preserve their freedoms. The Democratic Party, and now the government itself, is at war with you.

An example of how the homosexual agenda turns logic and morality upside down is its push for recognition of “inalienable rights.”

The Homosexual Lobby explains that, in the past, “The Commission on Unalienable Rights” was created by the State Department “to challenge the international consensus”; but it had a too “narrow view of human rights.” This narrow view has left “LGBTQ people” out. Hence, the HRC demands the Biden Administration bring on a “principles based approach” which would be fully “inclusive” for homosexuals.

In short, HRC demands that homosexual practices be counted as an inalienable right. However, This empties the concept of all meaningful content. Rights are inalienable because they are given by God—that’s why they are inalienable—they cannot be removed without incurring the wrath of God. This is sole reason government was formed to begin with—to protect what God gave us. “…to secure these rights governments are instituted among men…”

Over a century and a half ago, Frederic Bastiat, who was trying to preserve freedom in France, explained to the world the following.

Life, faculties, production—in other words, individuality, liberty, property—this is man. And in spite of the cunning of artful political leaders, these three gifts from God precede all human legislation, and are superior to it. Life, liberty, and property do not exist because men have made laws. On the contrary, it was the fact that life, liberty, and property existed beforehand that caused men to make laws in the first place.